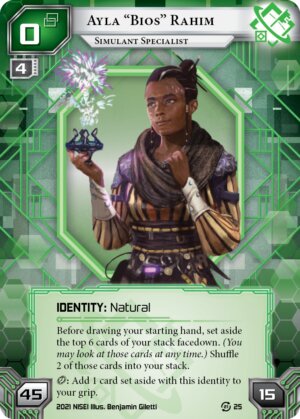 Before drawing your starting hand, set aside the top 6 cards of your stack facedown. (You may look at those cards at any time.) Shuffle 2 of those cards into your stack.

click: Add 1 card set aside with this identity to your grip.

Illustrated by Benjamin Giletti
Decklists with this card

I'm certain I'm not alone in thinking that Ayla is in many senses Andromeda: Dispossessed Ristie out of Shaper.

Mathematically there are similarities. Let's take the simple example of trying to find at least 1 of 3 copies of a card in a 45 card deck on round 1.

Of course, Andy also has a 4 tempo advantage here since her cards don't need to be drawn. On the other side of the coin, Ayla doesn't suffer the risk of having to potentially discard cards or pay for later game pieces early. And Shapers have options to go fast later. Ayla nicely embodies the thematic differences between Shaper and Criminal: Slowly build the perfect tools vs. early aggression.

There are some obvious cards you love to see round 1: Mopus, ProCo, or perhaps the new Laguna Velasco District, (LaguV?).

Beyond single cards combinations are also obviously accelerated. Early Personal Workshops, Aesop's Pawnshop, or Fan Site are important for some deck archetypes. I'll stop here but the pattern is clear. Any combo focused deck that was played out of Chaos Theory: Wünderkind for the 40 card deck size is strictly superior out of "Bios".

NVRAM is an interesting new mechanic as well. Although slower, it's worth noting that at time of printing nothing interacts with NVRAM except Ayla. Those cards therefore are completely safe from damage or being removed from the game. But, make sure you retrieve any cards you want before being tempted to play Rebirth. And of course Cerebral Static blocks access to these cards. That's one motivation to play currents.

NVRAM as a holding tank has some interesting properties. It holds any type of card. So you can save Events (which only Logos can currently tutor and only on a score by the corp) for later retrieval at just the right time. Don't save all your currents there of course if you fear Cerebral Static. But high impact events like "Freedom Through Equality" or Levy AR Lab Access come to mind.

Hardware and/or program pairings that need to be played in order are natural fits for NVRAM which reduces the need for scavenging, uninstalling, or just trashing and replacing later: Live the Dinosaurus/Sage/Adept/Savant/Yog.0 delusion. I mean dream. NetChips are more likely to land in there if you play a few and so on.

NVRAM can also hold your late game rig cards or tech cards that aren't relevant now, or in the current match up at all.

I think this is a great addition to the card pool. Offers some interesting and well balanced options that perfectly embody the Shaper ethos. The art is also spot on. The hopeful wonder in her face really epitomizes the Shaper brand of transhumanism for me.

(Terminal Directive Cards era)
FreqKing 251
Also, if your luck is kinda poor, you can use NVRAM as a trashcan to thin out your deck, if the 6 cards you draw have some silver bullets that are irrelevant in a current match-up. — Shieldwall 28 Apr 2017
Yes exactly. Those are the kind of tech cards that may not always be relvant I was thinking of, — FreqKing 28 Apr 2017