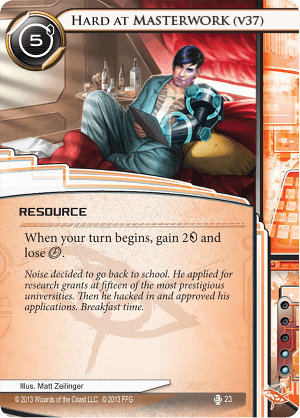 Geist is one of the most fun to play runner IDs in the entire game, however I'd been struggling to get decent mileage out of him for the last couple of MWL iterations. Pirate Geist was good, but influence limits and the loss of Underworld Contact constrain the build somewhat.

Off Campus Apartment improves his draw, however when Scarcity of Resources is a thing it actually slows setup speed, proving to be a liability against rush decks.

I was at a loss and needed to return to basics. His key strengths are precise runs and an extremely powerful mid-game. To play to these strengths he needs to set up quickly with the potential to make scoring runs as early as possible, increase the length of the mid-game, and triggers. Lots of triggers.

So how do you make an ID that is made to draw cards run through the deck faster than it already does?

Card draw: With Masterwork (v37), Geist now not only draws a card when you use a trash ability, he also draws a card with the first hardware install each turn.

Click compression: MW (v37) and Hayley. Hayley is already an incredibly efficient runner. With the console in play her efficiency is bumped up another notch. However The Class Act can improve on this again:

That's 4 clicks for the price of one. Not to mention that at least one of the pieces of hardware you installed is usually able to be trashed immediately, drawing more cards and providing money from Tech Trader.

Basically the deck ramps up hard and maintains significant pressure on both RnD and remotes for many simultaneous turns. If the Corp is unlucky or silly enough to be floating multiple bad publicity you can install your hardware even more cheaply every time you make a run. Mulligan for Tech Trader/Hostage every time.

Tech cards: Flip Switch draws a card while you're getting rid of tags, jacking out or reducing Surveyor's trace strength during runs on deep servers. Stealing a QPS behind Data Raven also provides much enjoyment.

Falsified Credentials is like a Spy Camera for remote servers.

Recon Drone is legitimately an MVP contender in this deck. I can not stress hard enough that this card is 100% necessary if you want to tweak the build. Trap decks or any Corp teching against 419 get completely neutered by this card. Half the time you hit a Snare! the Corp won't even bother paying into it because you actually make money and draw 2 cards from preventing it and then using your Flip Switch to remove the tag.

WTF?: Why would anyone take 3 copies of LARLA? Because all 3 get used in something like 30% of games. Once the rig is fully assembled it hoovers cards off the stack.

You should know that this deck is buggy as hell on Jnet due to the multiple simultaneous triggers. Hayley likes to trigger before The Class Act so you occasionally need to add clicks on both your own turn and the Corp's.

Bonus points if you install The Class Act on the same turn you LARLA, or via a Street Peddler install on the Corp's turn.