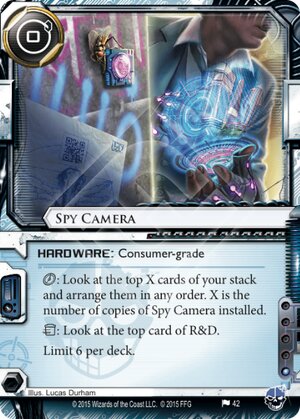 click: Look at the top X cards of your stack and arrange them in any order. X is the number of copies of Spy Camera installed.

trash: Look at the top card of R&D.

Illustrated by Lucas Durham
Decklists with this card

This review was written shortly after the release of The Liberated Mind.

I've played with this card extensively out of Armand "Geist" Walker: Tech Lord. He is almost certainly the best ID for this card (free-to-install + has a on it), and might be the only ID that generally has enough synergy in his decks to get the most out of it. This review assumes you are running it out of Geist.

The trash ability is good for reasons noted elsewhere (in-faction R&D pressure, save time/credits/etc on fruitless runs, know the corp's gameplan). Geist gets an additional draw out of the deal, and will typically be running multiple Tech Traders which throws in a few . Great.

Here's what you can do with the trash ability.

The last one is clearly less general, but the first four lead to a variety of tactical play that I think is in the same league as Clone Chip, Self-modifying Code, and Jackson Howard himself.

Too bad that the click ability is so weak, right? You have to have, like, infinity cameras for it to be worth using. If only there was some way to get your hands on all of the spy cams in your deck. Oh yeah, that card exists: Replicator.

Before we get into how best to leverage the click ability, let's address the main complaint: you still have to spend 6 installing these stupid cameras, and the game is called "Android: Netrunner" not "Android: Install a Bunch Of Stupid Cameras." I would argue that it's actually a fine use of your time in Geist, even without additional support. If you install them one at a time off of replicator and only use the trash ability, it's still 1 to get a draw and a peek at R&D (significantly better than clicking to draw). It will very likely be several on top of that (1 for each Tech Trader on the board when you trash it and 1 for each Technical Writer on the board when you install it).

Now that we've addressed that complaint, let's set the complaint on fire because Bazaar exists and lets you install all 6 cameras on a single click.

Now, Replicator and Bazaar both fail the standard litmus test for being a good card: "is it good on its own, or just in a combo?" If Adjusted Chronotype giving 2 click-free draws per turn with Wyldside is good enough to play, then I am 100% certain that getting 6 draws, 6 peeks at R&D, and a ton of credits for a single click is worth slotting a couple, especially in a faction that generally has poor draw and poor R&D pressure. Additionally, Sports Hopper and Forger are generally pretty reasonable targets for replicator (even if you don't install them immediately), so it's really just the Bazaar that can be a dud. By the way, you're going to Levy AR Lab Access at least once and do it all again.

OK, onto the ability: re-ordering your stack is theoretically not awful (letting you plan the next few clicks or turns ahead, protect stuff from damage that you want to use soon, practicing your short term memory), though cards which enable it (Rolodex) or leverage it (Eureka!, Oracle May) are generally considered under-powered. Spy Camera's click ability really shines, however, when you are setting up your board and have ~4 installed. Let's assume that you've used replicator (optionally bazaar) to install 4 cameras. Click, order the top 4 cards in the manner that's most pleasing to you, draw the card(s) you want, and then install another camera (I call this "doing the replicator shuffle"). Repeat. It's like Making an Entrance, but it's in-faction, doesn't have to be done on your first click, and can be done multiple times. The cards you don't want right now go around the cycle again (maybe you'd rather have trashed them, but maybe they're just not what you need right now).

Once you've got all 6 cameras on the board (or however many are left), make judicious use of shuffle abilities (from Hostage, installing other hardware that you can replicate, etc). to effectively turn the click ability into " : Add a useful-ass card to your grip from your stack. OK, maybe it's not exactly what you want, but c'mon what the heck" (note to FFG: I am available to write card text for future cycles).

So, in conclusion: you have to have a lot of support to make Spy Camera good. But if you support your spy cameras, they will support you.

(The Liberated Mind era)
internet_potato 961
The guy I know who runs this puts two replicators on the board and proceedes to install 3 cameras with one click. Where this gets insane is when two Technical Writers are out, and when you trash two Tech Traders are out. Plus one Geist draw. It can get pretty agressive when mid run you can sack for those few extra credits. — Catsodomy 6 Jun 2016
@catsodomy if you have both bazaar and replicator installed, you can install all of the remaining spy cameras in a single click. — internet_potato 6 Jun 2016
4

The third piece of consumer-grade hardware as here, and I personally find it to be the more interesting and exciting of the bunch.

Let's actually look at the second ability first. ": Look at the top card of R&D." If nothing else, this means that it's worth the click to install Spy Camera. Knowing the top card of R&D is immensely valuable, because it lets you make targeted runs to snipe out agendas, and also because you can predict the corp's game plan better. Two cards have given you that ability before Spy Camera (namely, Deep Thought and Globalsec Security Clearance) but for substantially higher costs and drawbacks that aren't feasible in many decks.

And you get this as a trash cost, so Geist is happy, as is anyone running Tech Trader.

The first ability, though. If you only have one out, you can only click to look at the top card of your stack, which is not particularly useful since you could have just drawn it. You could potentially peek and Oracle, spending two clicks for a card and 2 but that's a weaksauce combo compared to Motivated May (which is also not very good). Ditto for Eureka!.

But on the other end of the spectrum, when you have all 6 out, you have an immense amount of control over your draws, and knowledge of the future. Looking for your Corroder? If it's in the top six cards, move it to the top and grab it...and now you know what the next five cards you will draw will be, letting you plan your turns more efficiently. Likewise, you can use it to find that Account Siphon when you have a window for it, or an Inside Job when you need one.

The problem is getting enough out for the peek-and-sort to be worth using. Replicator helps, but even with accelerated draws it's still 6 clicks to play them all. Is that worth it? Maybe. It does work nicely in Hayley, since she can just spam them out, but running 6 Spy Cameras is six influence, which is a big ask.

Spy Camera feels like a combo card, but the other parts of the combo don't seem to exist yet. Keep an eye on this one for the future, but for now play it for the free R&D look, not for the stack-sorting.

(Democracy and Dogma era)
tiedyedvortex 4729
The other parts needed are in Apex — mmik 1 Apr 2016
Worth noting that R&D pressure is harder to come by for Criminals than HQ pressure. Spy Cameras apply a little, pressuring the corp to ICE up R&D harder or risk losing agendas to snipes, which is a nice benefit to be able to get without spending influence. — LordRandomness 4 May 2016