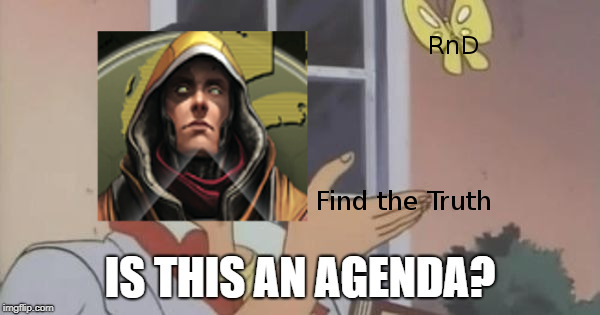 This is the Adam deck I came 2nd with in Sheffield regional, not dropping a single runner game - Beating The Outfit, IG, then Blue Sun and IG again in the cut.

The idea of this deck is to use Find the truth to pressure RnD while pressing other places. "Sad Dash", Freedom (not the ID), and Whistleblower all work well with knowing the top card of RnD constantly, allowing them to never miss. With the influx of decks running 6 5/3s the fake points close many games early.

Golden scales well vs Surveyor, and can derez Orion vs blue sun if you're a lot richer than them, that's it really. Low sentries like Formacry are a real pain in the ass for it though.

Adam found some early truth with FTE by taking a Broad Daylight, another poke at hand next turn found another one on top. Logic bombs make little work of Trebucet. And brainchip increasing my hand meant Simon's puntitive plan was off the table. Rasida popped and he pushed something in a remote, but Adams innate HQ pressure picked up the 3rd broad daylight from HQ, going to 6 + 1 fake point for the game.

Early snipe of bacterial and emergant finding brain chip gave Adam a good lead, 3 ice quickly went on archives which made me terrified to run it, After hitting the same 12 cost snare 3 times I started checking servers and found a bacterial (Should of dropped FTE first right :P). I poked a few servers looking for Hiro but missed him among the mess, Feedback and 9 hand size meant the kill was off....until I hit a 14 trash rashida with money to trash her. The truth was nowhere to be found, money running low I needed to start trashing the 3 BEA that were up as I cant tank them forever. Run archives 3 Vanilas. Access 2 Domes and 2 Futures, win the psi game for the game.

Wondering if I needed to 241 or go for a split, I mulled over the standings for 10 mins. My head hurt, I decided to 241, I won the right to play corp. Adam sat out this round.

Pat scored an early SDS and sniped Rezeki, I stole a hostile with FTE, and managed to keep pat poor, by killing an oversighted Orion, and logic bombing to get to daily quest...twice. I eventually found an SSL with the truth, but could not get into rnd, he jammed a card in a remote and took credits. 2 runs at HQ flipped 2 Puntitives. Pretty sure his hand was 3 puntitive and the SSL was advanced in the remote, taking it would mean Id go to 3 cards and no money and couldn't survive. I drop a citadel next turn and charge kati a bit more, Rashida draw happens and an over sighted Chiaysi goes on a random server. Run HQ, steal SSL and see SDS on RND, run though the border and hortum there and steal it for the win.

As if history repeats, Adam steals an early bacterial, Andi draws all 7 cards and then hits nothing with the next access. Couple turns of building up with a brainchip down, I see a FTP on top and try to find whistleblower to mad dash it. Can't find it, decide to run trying to lose the psi game to dash it last click...I win the psi game and my excellent plan is foiled.

I trash 2 BEA which get shuffled back. Andy is quite poor and seeing to draw mostly dedicated from HQ hits. I drop libby and tutor up feedback filter. Andi enters the scoop step. 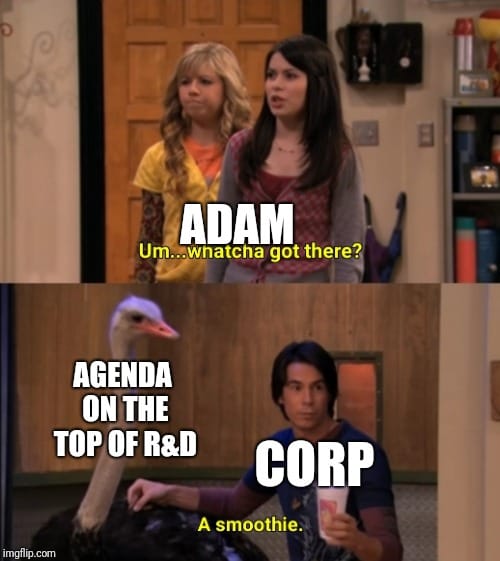 I'd like to thank all my opponents for a great event, and congratulations to Andi who eventually won, and a big thanks to Paul who gave up playing to run and stream an excellent event.

My corp deck is here