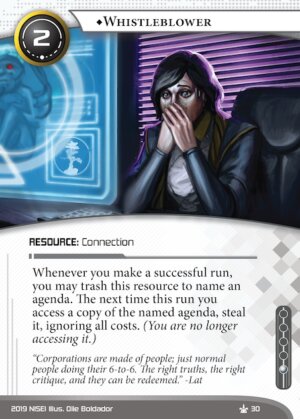 Whenever you make a successful run, you may trash this resource to name an agenda. The next time this run you access a copy of the named agenda, steal it, ignoring all costs. (You are no longer accessing it.)

"Corporations are made of people; just normal people doing their 6-to-6. The right truths, the right critique, and they can be redeemed." -Lat
Illustrated by Olie Boldador
Decklists with this card

I am absolutely the wrong person to evaluate this card on its playability. I am about as casual a player as it is possible to be; I still want to make a brain damage/click-denial HB deck with cards like Heinlein Grid and Kamali 1.0 and Mason Bellamy work. So when other people say that Whistleblower is generally not powerful enough to be playable right now, believe them. I'm not going to review this card on playability.

What I will review Whistleblower on, however, is its design, because I think Whistleblower opens design space in a way that gets missed when we only talk about whether or not it's worth a deck slot.

Whistleblower owes its lineage, of course, to Film Critic. Film Critic is a Runner tool for getting around nasty, hard-to-steal agendas like Obokata Protocol. It's also been Restricted since the beginning of the Banned/Restricted list, particularly because it's so damn good at what it does. At one influence and 1 to install, Film Critic is the gold standard tool for getting around defensive agendas. Want to have an easier time stealing Obokatas or Degree Mills? Slot Film Critic. Want to shut down SSL Endorsement? Slot Critic.

Film Critic, in other words, has the Jackson Howard problem: it's head and shoulders above anything else in its field. It's a first-order optimal card. While there may be niche cases when you pick something else before it (cases artificially made more common by Restricting the card), it's generally going to be an optimal pick. And that's boring and stifling from a design perspective.

Whistleblower is assuredly not a first-order optimal card. If more seasoned players are to be believed, it's actually pretty lousy. But weirdly, I find this encouraging. Jackson Howard, after all, wasn't supplanted by a single newly optimal card, because then everyone would have simply replaced Jackson Howard 1.0 with Jackson Howard 2.0. Instead, FFG recognized that Jackson's ability to sneak agendas out of Archives and back into R&D was critical enough to be available to all factions, and provided a number of powered-down options so players had choices based on the decks they were making. Attitude Adjustment, Gatekeeper, Genotyping, and Drudge Work all brought faction-specific Jackson effects on a variety of different card types. Preemptive Action and Distract the Masses were neutral options, both with their own costs or drawbacks. Breaking down Jackson's functions and divvying them up among multiple suboptimal cards opened up design space.

I think Whistleblower, underpowered though it may be, shows that NISEI recognizes that there's value in protection against defensive agendas and is interested in making that more accessible and varied. Maybe the next piece of protection against defensive agendas will come in the form of three faction-specific answers. Maybe it will be a neutral run event similar to Direct Access that ignores the abilities of any agendas accessed. Whatever it is, I have hope that future cards continue to explore this design space, so that the answer to defensive agendas becomes more interesting than "just slot Critic", and for that reason, I applaud the design behind Whistleblower.

I was looking to write a similar review, but you pretty much nailed it. The netrunner designers have struggled for a long time making 5/3 agendas usable, and now through years of tweaking we are at a place where they are worthwhile. Stealing a 5/3 is a big win for a runner, and even with the nastiness that comes with Obokata or SDS, again and again runners suck it up and keep going. Let alone random luck on R&D accesses of those agendas. As you rightly state, having a silver bullet is not the answer. Film Critic will rotate, and it won’t be replaced (if card design like Whistleblower is anything to go by). And that’s a good thing. That’s not saying Whistleblower doesn’t have its problems. For instance, perhaps a trash after accessing the said agenda might have worked better, or a shuffle into deck if no agenda was stolen. As it stands now, Whistleblower is a one shot wonder, and if you steal the wrong agenda (so to speak), that’s basically it for the rest of the match. It’s not very reliable, and probably won’t be slotted. Players should feel empowered by picking their agenda suite. Cards which nullify a strategy as soon as they hit the table don't make for a satisfy experience. A thrust and parry, where questions are continually asked instead of one knockout answer makes for the white knuckle ride that defines Netrunner. More cards designed in the way Whistleblower is keep things interesting.

I think it should have it´s name-an-agenda restriction, but it should also add the agenda into your score area instead of stealing it. That way, it´ll protect you against every agenda steal punishment I can think of

This card has some problems. Before we look at the drawbacks, we need to look at when this card is good.

2) This will also block upgrade costs like: Red Herring, Strongbox, and Ben Musashi

4) Combos with “stolen” agenda triggers like: Mad Dash, Leela, Freedom through Equality, Another Day Another Paycheck and getting rid of any Corp currents. Thank you for the additions Rahrhino and 3ric!

5) Better tempo than having to spend two clicks to retrieve an agenda.

Why this Card is Not Good:

1) Why not use the queen of this? Film Critic It is the same influence cost. Only reason you say no is if you already are using 1 restricted card. (Aesop's Pawnshop, Crowdfunding, Dorm Computer, Employee Strike, Gang Sign, Inversificator, Levy AR Lab Access, Mad Dash, Paperclip, Rumor Mill) (posted during MWL 3.2)

2) This does nothing against all of the cards you want it to. Haarpsichord Studios, Argus Security: Protection Guaranteed, and Jinteki: Personal Evolution. Don't forget, you are also still in range of a Punitive Counterstrike as well.

If only this said "add to your score area" instead of "steal".

This is my first review. Please comment if you find anything wrong.

(Downfall era)
Crunchy 30
A small correction - Whisteblower blocks on access effects like Explode and TFP similar to Film Critic (Runner effects trigger before Corp effects). That said, its still going to be hard to call those cards unless you've seen them previously or have some nudge via expose. — Mezuzi 25 Apr 2019
since you're interrumping the access, it also works to prevent the net damage, the future perfect etc. But as you say the efects of stealing are still happening. That means that Jinteki, Personal Evolution happens, Argus happens and Haarpsichord effects are still applying. And thank you for reviewing = D — valerian32 26 Apr 2019
We do need to consider that it allows you to bypass on-access/steal effects while *not* having to spend 2 clicks to actually add it to your score area. I agree it's not great, but it's sort of like half the effect of Film Critic at twice the speed. — Chezni 25 May 2019
Worth noting that this does combo with Mad Dash whereas Film Critic does not so you can steal the agenda without paying the additional cost and still get the cheeky bonus point on top :) — Rahrhino 6 Jun 2019
Also worth noting that this card could work well in a Leela Patel deck. Film Critic is a bit of a dud for Leela, since it has anti-synergy with her ability and it prevents her from being able to use Gang Sign. Whistleblower gives her access to all the protection you mentioned in your "Reasons to Use" section without these downsides. — 3ric 17 Aug 2019
Thank you all for your continued additions. I will update the post when I can to make sure this post does not go stale. Please continue to comment and I will try my best to add in all the pertinent information. — Crunchy 17 Sep 2019