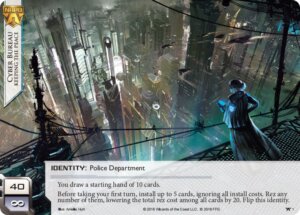 You draw a starting hand of 10 cards.

Before taking your first turn, install up to 5 cards, ignoring all install costs. Rez any number of them, lowering the total rez cost among all cards by 20. Flip this identity.

Illustrated by Amelie Hutt, Dmitry Burmak
Decklists with this card

Where was this card released and how do I get my hands on one? Is this a fan made card that I have to print through makeplayingcards, or was it ever officially released? Thanks in advance, the idea of a four player game is really intriguing, and would love to get my hands on a copy.

I believe it was a digital-only release for PNP. Rules are here: https://images-cdn.fantasyflightgames.com/filerpublic/2a/9e/2a9e3c68-0dd7-4b22-bf0d-25e55e1d8f11/adnnapdmultiplayeridentity.pdf

It was released at Magnum Opus: World's 2018. Only attendees got a copy of it.