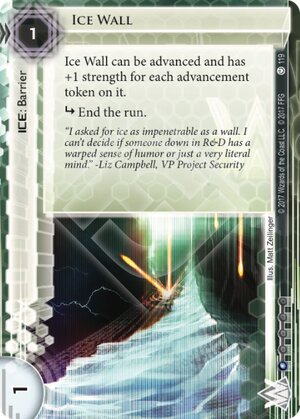 "I asked for ice as impenetrable as a wall. I can't decide if someone down in R&D has a warped sense of humor or just a very literal mind." -Liz Campbell, VP Project Security
Illustrated by Matt Zeilinger
Decklists with this card

(The Universe of Tomorrow era)
Pikeman 267
And at 1 influence, every Corp can experience Ice Wall's charms. — LynxMegaCorp 30 Sep 2015
@Lynx Kuroneko - Definitely. I especially love dropping it into a Jinteki or NBN deck. — Pikeman 30 Sep 2015
3