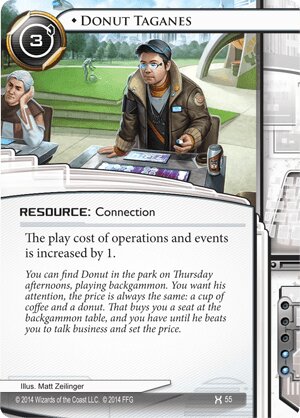 The play cost of operations and events is increased by 1.

You can find Donut in the park on Thursday afternoons, playing backgammon. You want his attention, the price is always the same: a cup of coffee and a donut. That buys you a seat at the backgammon table, and you have until he beats you to talk business and set the price.
Illustrated by Matt Zeilinger
Decklists with this card

Donut complements anti-asset cards like Hacktivist Meeting, Whizzard: Master Gamer, and Scrubber to shut down Corp economy. Of course, then you can't really run Event economy, as it will shut that down, too. Some events will still be worth playing (e.g. Sure Gamble still becomes Easy Mark, and Account Siphon is still quite good), but you would want to rely more on a resource economy to avoid the penalty yourself. Or run Magnum Opus.

Of course, Donut takes 2 influence for each copy, and you never want to draw more than one, so Hostage becomes the perfect pair with Donut. Search him out when you need him, but grab other things when you don't. Even outside of Criminal, it still only costs you 2 influence for Hostage, the same as Donut. So the question isn't how many Donuts to run, it's how many Hostages to run. (True, it could get trashed, but if you're really worried about that, run Fall Guy.)

If you're running Hostage, then a whole host of other cards become attractive, like the aforementioned Scrubber, or Professional Contacts, Aesop's Pawnshop, The Supplier, Tri-maf Contact, Film Critic, The Helpful AI, Woman in the Red Dress, Inside Man, Kati Jones, and Underworld Contact. Then Off-Campus Apartment and Calling in Favors become potential additions as well.

(The Universe of Tomorrow era)
EnderA 488
For the combo lovers, you can use Dr Lovegood to blank him to avoid penalty. — zzzzzuu 28 Sep 2015
1

Ken loves Donut. He has the influence for him. He recoups the penalty on his first run event per turn. With Account Siphon in faction, he can create credit swings that are harder for the corp to recover from with operations.

Other resource heavy criminals might enjoy installing him for free with Career Fair.

Expect Donut and Sunny Lebeaux to be friends too. She's gonna be packing nothing but resources and programs.

(Chrome City era)
JohnnyMilton 1038
I completely disagree about Ken. Why play a card that hurts the cards that work well with your ID?!? Play it in Whizzard, where it puts the Corp in the awkward position of having bad asset economy and bad operation economy. — EnderA 26 Sep 2015
1

Donut Taganes; it's a card I really like, or at least want to like. This card obviously fits in a deck with very few events, or no events. So in my opinion, it fits well in Hayley Kaplan: Universal Scholar decks. I personally like building event-less decks with her as it makes it easier to use her ability every turn, even on corp turns. So in my couple event-less Hayley decks, I could not help but add this card. It can definitely be a great card. It makes corp econ cards less effective, not only effectively producing one less credit but costing one more to play. So Restructure especially can become very hard to play. Subliminal Messaging is now useless, so if the corp is running that, you don't have to worry about running every turn if you don't want to. And of course, there are tons of other operations that corps love to play that will cost 1 more. So, if you get this card out right away, it becomes quite an annoyance for the corp, especially if they are running a lot of operations. Now the downside for me is the cost, both the influence and the install cost. The install cost is worth it if you get it out early, but still it's an investment. The real problem is the influence cost. For a card that will not see play in many decks, it has a high cost. Even in my Hayley decks, I could only find room for one of them, barely. Then I run into the problem of getting it out early. I do agree that Hostage would help in that regard if you are willing to make the investment.

I'm throwing around the idea in my head to try and make a Reina Roja: Freedom Fighter deck with this card and Xanadu but I'll have to see if it's feasible.

Anyway, this is definitely a interesting card and a fun one if you build a deck around it.

(The Universe of Tomorrow era)
quailman2101 265
With Dr. Lovegood on the horizon, our Donut could be back on the table, since only the corp will suffer his power. — HolyMackerel 14 Oct 2015
True, I didn't think of that! — quailman2101 14 Oct 2015
His influence makes me think Criminal Resource deck. And there he shines. — LynxMegaCorp 14 Oct 2015
Yeah, I forgot I once put him in a criminal connection deck with Off-Campus Apartment. Calling in Favors was the only events I used. It costs one more with Donut installed but also produces one more. — quailman2101 17 Oct 2015