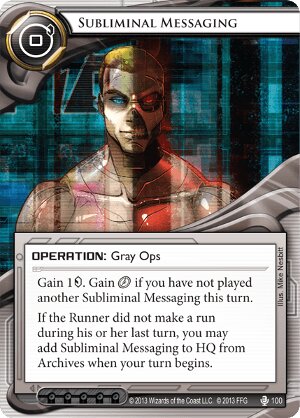 The first time each turn you play a copy of Subliminal Messaging, gain click.

When your turn begins, if this card is in Archives and the Runner did not initiate any runs during their last turn, you may reveal this card and add it to HQ.

Illustrated by Mike Nesbitt
Decklists with this card

Subliminal Messaging works best as an incentive for the Runner to run. Yes, that's right. An incentive.

Corp decks are at their most vulnerable when the Runner can "explode," and deal with several threats at once. A common "explosive" play is Account Siphon / Inside Job the scoring remote, while the ice is unrezzed. This play effectively counters most early scoring strategies on the corp's side. But notice that the runner has to get into HQ. Other, similar explosions also require successful runs--deep RnD digs; Account Siphon/ Vamp/ Data Leak Reversal; and so on. These all take resources, mostly in the form of credits, to pull off.

Subliminal Messaging offers the runner a choice: either start running every turn, or let the corp amass credits like a miser. If they want these clicks to be productive, then they have to start using credits and cards to get into servers, limiting their explosive ability.

Wasting a click from the runner each turn to deny the corp one free credit every turn is good for the corp, but letting the runner bounce off an Ice Wall is the worst use of this card. Runners with constant-pressure cards like Datasucker and Security Testing like making one run a turn, and can make corps regret their decision heavily.

So, there are two ways to take advantage of Subliminal. The first is to have cards that trigger off of runs, like Dedicated Response Team, Paywall Implementation, and, to a lesser extent, operations like SEA Source. These cards have the effect of making low-risk runs much more dangerous for the runner. Now the runner can either deal with those threats, or let the corp get one free credit a turn--which quickly builds up. Either way, the corp keeps pressure off while setting up scoring servers/windows.

The other way to make Subliminal messaging work is via lots of ICE that make it painful to face-check. Neural Katana, Enigma, and Pop-up Window all come to mind. These end up more effective than ETR ice in discouraging runs, since the runner can no longer bounce off painlessly. Unless the runner can break the ice, it's not getting run on. If they do break the ice, then you've probably made them spend more than a credit--taking away their economic advantage.

Subliminal, in terms of credit output, is much like PAD Campaign or Mental Health Clinic. It works best in decks with a longer gameplan, and in decks that might need to rapidly recover from going down to 0 credits. Rush decks aren't particularly invested in it, then, and decks that spam ETR ice might not want to bother. In certain, slow-playing decks with painful ice, this card shines, not because of the raw credit production, but because of how the runner has to respond.

Terrific single-add card that I have the guilty habit of adding to almost every Corp deck I play. You'll never be sad to draw this card, and it's not game breaking to either get it or not in a match, so really only a single copy is needed. Absolutely worst, worst case you get 1 credit for free the entire game (maybe against a super hard running Criminal?). Best case you get a Hedge Fund or more of value throughout the game against a slow, careful Shaper. If you're really crushed for slots maybe the card isn't worth a spot, but I rarely find that to be the case.

Plus there's a mental factor. I find Runner's tend to not like the Corp benefiting from them running or not running. It's psychologically their special thing and the Corp shouldn't mettle. What I'm saying is I've seen this annoying a wide spectrum of players, so it's a good demoralizing tool as well as a fun card.

The System Upgrade Reprint contains the keyword "reveal", so you basically gain two credits for free in Hyoubu Institute if the Runner don't run.

With Subliminal Messaging, the corp gain the ability to have a drip economy that is difficult to shutdown. It is especially good in a glacier or trap deck, where the runner will not want to run often.

For deck that favor small econ, it might be worth as 3x, for the dilution of the hand, which will help protect whatever else would be in there.

It is nice to see such an old card (2013!), but it show its age. The art is average and does not evocate well the title, and there is no flavor text.

According to a strict reading of the rules, this card appears to be nonfunctional right now. I mean, the top part works. But the bottom part seems to be busted.

The related rules, from the rulebook: "Inactive: An inactive card’s abilities do not affect the game and cannot be triggered." "Archives- This is the Corporation’s trash pile. Archives is kept adjacent to R&D. This is where Corporation cards are placed when they are trashed or discarded. Cards in Archives are inactive."

The only exception made in the FAQ to cards being inactive is as follows: "A card with an ability that triggers when the card is accessed does not have to be active in order for the ability to trigger."

(Order and Chaos era)
LSK 4622
the rulebook also states: "The golden rule, if the text of a card directly conflicts with the rules of this book, the card text takes precedence." — grovax 27 Mar 2015
That doesn't apply here - nothing on Subliminal Messaging directly contradicts the rules. That's for cards like Eden Fragment, which change a rule. — LSK 28 Mar 2015
Your hypothesis is that Subliminal Messaging's lower half does nothing because the rules say it's inactive. If so, why was that even included in the card? It's implicit that the ability is supposed to function. "Inactive" is to make sure that cards like Encryption Protocol aren't functioning in Archives (or HQ/R&D). — EnderA 28 Mar 2015
FFG are pretty bad at writing rules, at the end of the day this is a case of "We all know what this card is meant to do" even if the rules don't make sense. — miaxari 28 Mar 2015
The golden rule does apply. The second half of the text may contradict the rulebook only by implication, but the implication is clear and the only valid interpretation. — Ber 30 Mar 2015
Rez jeeves.....First click, subliminal messaging, gain a click, use that click to install a 3/2, second and third click shipment from sansan and place the counters on the 3/2. Trigger jeeves advance and score said 3/2. I'm just saying — codychilton13 13 Sep 2016