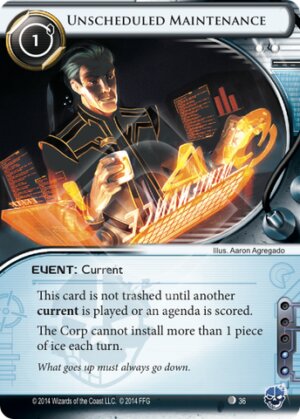 The Corp cannot install more than 1 piece of ice each turn.

What goes up must always go down.
Illustrated by Aaron Agregado
Decklists with this card

Unscheduled Maintenance is a bit of a headscratcher, whilst its effect is potentially useful, it almost feels like the deck needs to support the card, rather than the card supporting the deck.

Because it is a current it lets the runner turn off a corporate current for 1, 1 and 1 card. This effect hardly warrants inclusion in a deck when there are much better currents out there like Hacktivist Meeting or Employee Strike.

The first question is how much impact does this effect have on the corp? That depends on how often the corp will put down more than 1 piece of ice per turn. Lets look at some potential situations:

Out of all these potential cases, the only one that seems even remotely plausible is case 4 and even then most likely Leela will have accessed most of the agendas in that hand already anyway, so the corp won't have to discard too many cards. Also big turns that cause the corp's hand to fill up with Ice tend to use up a lot of s to set up. This means that you would either need to play this card before (spoiling the surprise and risking it being removed) or save another click to play it, in order to get a rather minor effect.

The final analysis is that Unscheduled Maintenance is a dud card because there are very few (if any) situations in the game where the corp needs to install multiple ice in a single turn, these situations are extremely rare and the inconvenience is generally minor. During deckbuilding it is worthwhile asking yourself whether a card either helps you win or prevents your opponent from doing so. This card does neither and is unlikely to provide a return effect that justifies the cost of including and playing it.

(Business First era)
Zakalwe 479
It could be fun to stick down the turn before an Apocalypse turn.... — gamblingworld 23 Mar 2016