When your turn begins, gain 2credit and lose click.

Noise decided to go back to school. He applied for research grants at fifteen of the most prestigious universities. Then he hacked in and approved his applications. Breakfast time.
Anarch • Matt Zeilinger • Second Thoughts 23
All sets:
Links: Decklists | ANCUR 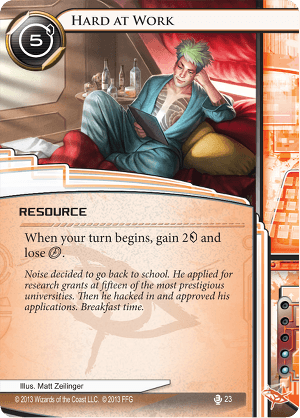 On the surface, it seems pretty straightforward. You get one Magnum Opus click each turn; that's pretty good, right? Two credits for a click is about as good as you can get normally.

But it's actually far worse. Because unlike Mopus, you are obligated to use it every turn, whether you need it or not, and you can't use it more than once per turn. Meaning that, on any given turn, you're either going to be starved for credits, starved for clicks, or both, and you won't have the versatility you need to deal with that. With Mopus, you can spam it when you need the money and ignore it when you don't.

Now, by itself, this wouldn't be a total dealbreaker. In my games with a Tri-maf Contact I typically end up using her once per turn, and it would be nice to not worry so much about tags.

But the install cost of Hard at Work is just so prohibitive. 5 is a huge tempo hit, and Hard at Work doesn't really pay itself off until 5 turns later, and that's being generous.

You might point out that with Aesop's Pawnshop the downsides of this card become less severe, which is true, but you would still be selling Hard at Work at a loss, meaning that you would have to leave it up for a few turns to try to recover that loss, and are still operating at a substantial deficit in those turns.

Ultimately, almost any deck that is running this card would be better off running basically any other economy card. Daily Casts is cheaper to install, doesn't steal your clicks, and destroys itself when you don't need it anymore, giving you the clicks you need to either run or draw to find another one. Liberated Account costs one more to install than Hard At Work, but pays for itself almost immediately. Armitage Codebusting is dirt cheap to install, and gives you six 2-for-1 clicks as soon or as late as you need them. Out of faction, the aforementioned Tri-maf Contact gives you the 2-for-1 click each turn for a much cheaper install cost. Professional Contacts has the same install cost and helps support a healthy economy. And if you can swing the memory, Magnum Opus is better in every way.

(The Source era)
tiedyedvortex 4544
This card might be worth playing with Adjusted Chronotype now. But then you're looking for some serious combo pieces for just 2 cred a turn. — tiedyedvortex 16 Apr 2015
To be fair, clickless 2 creds a turn or 1 click for 4 creds a turn is actually quite good in the long game. — Myriad 29 Apr 2015
Gene Conditioning Shoppe says have 4 credits and 4 clicks a turn. Add some underworld contacts and data folding and you have a crazy recipe for 10 credits a turn...eventually....with some runner. — cmcadvanced 30 Apr 2015
2

Hard At Work is a combo card and as such it requiers some help to be really useful. So this is not a cord for people who are afraid of some good JANK.

Earning 2 per is almost always a good thing, but losing a click with HAW, just like in Wyldside case, is sometimes not very helpfull. So what can we do to work around this?

Enter Adjusted Chronotype which will turn HAW into Daily Casts that will last forever. But 8 and two card combo like this is a lot! Yeah, thats true, but take a look at alternatives:

You need two copies of Underworld Contact and some other card that will grant your runner second , probably Dyson Mem Chip or Access to Globalsec if you really into oldschool stuff. Three cards 5-7 combo. And only if you are playing runner that has 1 from the beginning, which means Andromeda: Dispossessed Ristie, Edward Kim: Humanity's Hammer or Kate "Mac" McCaffrey: Digital Tinker, to name the most obvious. Also, upcoming runner Sunny Lebau with hers 2 from the start will love this.

UC + Dyson + Data Folding is neutral influence combo, and as such can work in various decks.

Hard at Work at Pancakes Factory is Anarch combo that can work with almost any red runner. You could ease its installing costs with Career Fair and even try to make it 4 cred drip with Gene Conditioning Shoppe, but this will require another card and to be honest I didn't test it yet because I couldn't find enough influence.

Good thing about HAW is that you pay once, and after three turns you are on plus and you don't have to think about it anymore. Apart of remembering to take your creds from the bank!

Downside is, that without resource tutors, you need more copies of it to find it reliably. Currently I run three copies of Hard at Work and three copies of Adjusted Chronotype with the support of Career Fair and most imporatant: Paige Piper to trash all the parts I don't need. Paige Piper looks like a fourth card for this combo, but make no mistake, it will make your draw much smoother.

Make no mistake, HAW and "Pancakes" are "only" 2 per turn, far from late game fantasy about three copies of Underworld Contact and Data Folding installed. But with the little help from Kati Jones it will help you greatly in the middle part of the match.

(Chrome City era)
konradh 273
Hard At Work has been repeatedly debunked as being one of the worst cards in the game. Investing 5 credits to then spend 5 turns waiting for it just to get back to 0 on your investment. You need to play like a dozen turns before this pays off better than even a humble Armitage Codebusting! Investing even more in wasting deck space and credits on Adjusted Chronotype is throwing good money after bad. — Satellite Uplink 15 Jun 2015
That's what Career Fair is for. — konradh 15 Jun 2015
bah my comment was cut in between, anyway... so far I had a lot of fun with this combo in my Anarch decks. I don't feel it is viable for some high level hurr durr tournament play, but everytime my opponets says "wow that was a nice deck!" I take it as a win. — konradh 15 Jun 2015
2

Don't even consider this card unless you are running Adjusted Chronotype. Even then, this card is not for the faint of heart.

Rightly so, the internet has universally panned this card. It comes in at an expensive 5 credits and requires an additional 3 credit card to get you your click back for the rest of the game.

Once the card reaches this point, you have invested a great deal into it. But if you can manage it early enough, I would argue that you actually are better off than you are with just a Kati Jones on the table.

Kati Jones requires a click investment and at least 3 turns of sacrificing a click and a fourth turn to click it out to get a payout worthy of the install. Depending on the match up, the full turns worth of clicks can actually hamper your aggression, while you are building up for your "1 big run".

Installing Hard At Work sacrifices some of that flexibility (you MUST click), but gets you 2 credits that turn. Over the course of the four turns, you get 8 credits, putting you 1 behind kati jones in terms of raw power, in exchange for giving you immediate access to the funds.

Now, in order for this dreamland scenario to be TRUE you must also get Hard At Work out for 2 credits, requiring either career fair or the supplier. At 2 credits, its pretty much a less flexible, less fragile kati jones.

If you also manage to pop out adjusted chronotype, either for free or at a reduced cost, you are living the dream. Two of these firing a turn suddenly warrants the lost click as gaining 4 credits a turn for a single click is pretty excellent.

I don't think it's there yet. But I think Chronotype almost made all of the "lose a click" cards relevant. Wyldside is now playable again. Starlight is almost there and might even go above and beyond in this cycle depending on any future doubles. Hard at work is the weakest, but might be better with the upcoming street peddler or a deck built around the supplier.

All in all, leave it in the binder, but keep an eye on it. You might just be surprised.

(Breaker Bay era)
Myriad 230
The Supplier would make it cost 3, which is still kind of reasonable, but the inf of the supplier is not. I think career fair is the right move here, especially considering he's hard at WORK. With the right amount of draw, it'd be worth having 'resource modded', adjusted chronotype and hard at work in the same deck — cmcadvanced 30 Apr 2015
Career fair works well with this card. Installing outright or using The Supplier actually ends up costing the same except you need 5 up front vs 3. This is because Hard at Work won't trigger the turn you install it via The Supplier. — quailman2101 17 Feb 2016