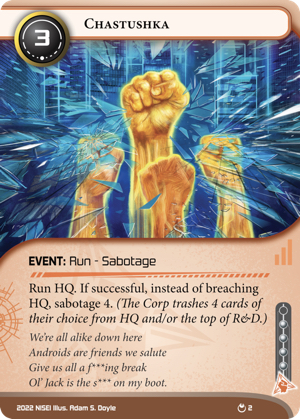 Run HQ. If successful, instead of breaching HQ, sabotage 4. (The Corp trashes 4 cards of their choice from HQ and/or the top of R&D.)

We're all alike down here
Androids are friends we salute
Give us all a f***ing break
Ol' Jack is the s*** on my boot.
Illustrated by Adam S. Doyle
Decklists with this card

This is not a useful review.

With that out of the way, a Chastushka is a rhymed folk verse usually of four lines traditional in form but often having political or topical content. It is most often humorous and/or satirical and is supposed to be punchy when it comes to language. As you can see, the flavor on the card checks some of these boxes. But if you ever want more chastushkas, you are in luck (NSFW text): threadreaderapp.com

This card would be reasonable if ice were more meaningful. The costs of giving up an early Boomerang/Botulus run or of mulliganing into a 0-1 ice hand should not be this high. Losing a HQ ice to Hippo already kinda sucks, but it shouldn't suck this much.

I think the breaking point for sabotage as a win condition is probably around 15-20 sabotages. Augustina can deliver maybe 5-7 uninteractively before most corps can reach a win condition. Esa, another maybe 6-8 uninteractively. Either of these requires a lot of deckslots and clicks. Chastushka delivers 4 in a single run event, a high impact per deck slot and easily splashable in non-sabotage decks.

Note: This review is focused on the startup format.

Let's ignore the effect of sabotage for the moment in order to compare this to other cards.

This card provides "pseudo multiaccess" to four cards for a cost of three. In this respect it looks comparable to The Maker's Eye or Legwork, which let you see three cards for a cost of two. You may not actually get to see those cards unless you also run archives, and if there is a spin doctor on the board then you probably won't get to see any agendas.

Is this likely to be splashed into reg Hoshiko decks? I would argue, probably not. Hoshiko is more likely to select The Twinning for multiaccess for many reasons.

So, this is likely an Esâ Afontov: Eco-Insurrectionist-only card, and it's most interesting when the runner is trying to win by milling the corp -- you're playing this for the sabotage win-con rather than "just" for multiaccess. And if the runner is able to land this card twice let's say, that puts 8 cards in the bin.

If the runner is able to put say 20 cards from the corp in the bin via sabotage, they are likely to win the game, because about half of the agendas and half of the ice will end up in the bin, and corp can only Spin Doctor so much of that back. If they lose half their ice they may not be able to secure all the servers, and then Esa can win in the remote, or R&D, etc. Note that Esa is likely to do 6-10 sabotages from playing core damage cards, and then they can also get some more sabotage from Avgustina Ivanovskaya.

Of those sources of sabotage (Chastushka, Esa identity, Avgustina, Marrow), Chastushka is the easiest one for the corp to try to prevent, and many corps will stack ice on HQ when vs. Esa. Why?

However, there are other forms of counterplay besides just stacking ice:

Of these forms of counterplay, which ones are most viable?

Crisium Grid has always been a very strong card, having a significant impact in many criminal and shaper matchups. It shuts down a lot of shaper multiaccess events like The Maker's Eye, Khusyuk, Deep Dive. It also blocks Stargate. For this reason it usually goes on R&D, except in matchups like Steve Cambridge: Master Grifter. However, there are also a bunch of important multi-access tools that have been printed which don't depend on the run being successful, and so don't care about Crisium Grid. This includes Docklands Pass and now The Twinning. The more popular these cards become in the meta, the weaker it is to run Crisium Grid.

Subliminal Messaging is obviously not a "power" card, but it has usually been fine to run it as a "one-of" in many decks. It usually translates to a small amount of free, clickless money. There are a few newer corp identities that have significant synergy with Subliminal Messaging.

Of course, Esâ Afontov: Eco-Insurrectionist can try to prevent you from getting back the Subliminal Messaging by initiating a run every turn, but if this does not advance their game plan of milling you, then this is it's own tax on the runner.