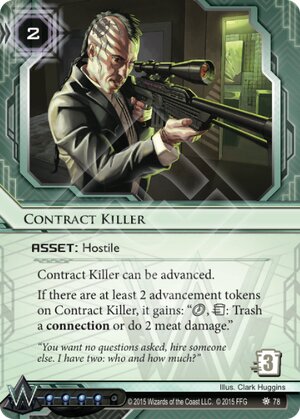 Contract Killer can be advanced.

If there are at least 2 advancement tokens on Contract Killer, it gains: "click, trash: Trash a connection or do 2 meat damage."

"You want no questions asked, hire someone else. I have two: who and how much?"
Illustrated by Clark Huggins
Decklists with this card

This card seems very good for slow advance Weyland where Kati Jones can become a problem. There has been no real way to deal with her, but now just hire this man and blap her. One could maybe play space ice (Nebula, Asteroid Belt, etc.) with Contract Killers and Underway Renovation to deck the runner and blap those Kati credits. Could work. Weyland has a lot of big ice and slow advance with the new "revealed on install" agendas might make a neat deck where the runner has to run through those ice just so his deck won't disappear. And for what? 1 point. And that is when you Midseason them.

Installed and left unadvanced on my first turn, this card got me a turn two kill against an overconfident runner (Sure Gamble, install, install, install), and for that it will always have a place in my heart. With the not inconsequential 3 trash cost I don't even really mind if the runner pays to get rid of it.

(The Underway era)
blacklionchest 21
I think I need to go make a deck focused on scoring The Cleaners and using Contract Killer to keep pressure... I think there might be something there. — FarCryFromHuman 7 Jul 2015
4

Boy do I love this card. Weyland's very own Ronin, this is an excellent tool for any Weyland deck looking to do some damage. Technically this can be FA'd if you want, but I believe this card serves a better purpose. Like Ronin, it masquerades brilliantly as a failed trap. And in a world in fear of BOOM! and Hard-Hitting News, people are more concerned with avoiding tags rather than preventing damage. A good strategy is to leave this out along with other traps, creating a minefield of Venus flytraps and Microwave Ovens. After running into one of those, it puts the fear of God into them and you are free to advance at your whim. While they're slamming centrals and hopefully hitting things like Bailiff or Errand Boy, you can get ready for your assassination, slam them with these, Vulcan Coverup, and Show of Force. Get ready to blap!

The weyland equivalent of Ronin, it has much less time required to cycle up than ronin. Facing a weyland deck with this means the runner can't just sit back with no tags and feel safe. It forces the runner to start running more in fear of this sort of losing a valuable connection. Meat damage without tagging saves weyland all the influence necessary to make tagging work.

3 and 4 to do 2 meat damage isn't likely to kill the runner by itself without a tag, however connection destruction is going to be a very reliable way destroying the runner's economy or tempo. Trashing a loaded Kati Jones, Mr. Li and now with The Valley, Paige Piper is a serious set back to the runner. Even more so if they have used Paige to remove all the copies from the deck of that connection.

Combining this with tags allows Weyland to successfully strike with the equivalent of a Traffic Accident if prepared before hand, increasing the chance of successfully flatlining a runner who likes to float one tag while hiding an I've Had Worse in hand to bait Scorched Earth out.

While more efficient than ronin, the total cost is only 1 less, lending itself well to using advancement with The Root, Simone Diego, etc, to keep the cost low.

Placed in Argus Security: Protection Guaranteed, it presents a formidable combo with both Punitive Counterstrike or Scorched based on which option the runner takes.

Useful for both slowing the runner down and flatlining them easier while forcing the runner to play around its potential will make this card very interesting.

(The Valley era)
Krondras 4
Biotic Labour/ToL can help you FA this if need be. — Kroen 5 Apr 2015
Good point. ToL would be especially good in Cosmic Ice decks as it gives you something to work with that can use the counters and providing immediate benefit. — Krondras 6 Apr 2015
I'm looking at Tech Startup with this card. In Gagarin where you're running lots of remotes, rez tech startup to get this into play if they ever end with only 1 card in hand. Maybe in combination with psychic field and/or snare. — MisterLovejoy 6 Apr 2015
1

You only need enough credits in Netrunner to win - any more is a waste of clicks or cards. For that reason, generally it's only worth killing connections that stand to make the runner enough money from now until the end of the game that would enable them to win. For instance, if they've recently installed Kati Jones and have started loading her with cash, she's a good target. Once they've emptied her, she's less appealing, since there's a myriad of ways they could leverage that cash to win the game. However, if they then spend that cash on a few runs and don't win, suddenly she's an inviting target again. Similarly with Professional Contacts, if the runner is sitting on 30 credits then there's little difference between drawing or ProCoing, as they're unlikely to use all that cash by games-end.

It follows then that the best time to kill key connections is when the runner is poor and rig-building. So my question is, why would you spend 4 money and 4 clicks on Contract Killer to kill the runner's connections, when you could spend 1 or 2 clicks and maybe a few credits to Snatch and Grab the connection instead? Yes, it's hard to Snatch and Grab Kati Jones if she's just been unloaded, but that's also the worst time to use Contract Killer on her since she's fulfilled her purpose. The meat damage ability is not very worthwhile, since 2 damage is only enough to kill if backed up by Scorched Earth; at that point you may as well just play Midseasons and Traffic Accident.

(The Underway era)
Circadia 2787
It works quite well as runner bait - if they run your server then you have taxed them through your Ice. If the eave the Contract Killer alone then you have killed a connection for 4 credits rather than for as much as they were willing to spend on defending that connection, especially if they have a credit lead. It also turns on SEA source/alternative tag source , 2 Meat damage, 4 meat damage which can be more of a surprise than Midseasons Traffic Scorch. — Cliquil 4 Aug 2015
GRNDL Refinery and actual traps work much better as runner bait if that's your aim. If your aim is to win by meat damage, then you're better off running Shattered Remains to deal with Plascretes. As I pointed out, the argument that sometimes it's going to cheaper to play Contract Killer than Snatch and Grab is spurious because its generally a waste of 4 clicks and 4 money to kill a Kati Jones if the runner is rich enough to defend a Snatch and Grab. The setup required for factoring Contact Killer into a flatline play as compared to double scorch or Traffic/Scorch is huge. Too many things have to go right, and I think playing this card over those if you want to threaten a flatline is a mistake. — Circadia 4 Aug 2015
It isn't that it is better than Snatch & Grab, or at particular traps at any ONE thing - the argument for this card's use and effectiveness is that it suits a variety of roles to suit your purposes. Snatch & Grab is useless if they have no connections, traps are no good if the Runner can expose them, Traffic accident is only good if you can land a multitude of tags. Sure, they all do their ONE thing better, but Contract Killer isn't just trying to be just one thing. Also, as an aside, there are plenty of in game situations where the runner has a lot of money, with more on Kati. Runners are getting very rich in places at the moment. — Cliquil 4 Aug 2015
I think it's important to note that contact killer can't be countered, only mitigated. Yes, there are other card combos that are quicker and more brutal but you either need multiple cards or require a trace to land in order to use them. If the runner has ways of beating traces, or dropping tags, they can avoid loosing a connection or taking damage at a crucial moment. They don't even need to be way a head, 3-4 creds is all it takes in some cases. When you use Contract, they don't have those options. — TheWackyWombat 5 Aug 2015
With Old Hollywood out, Kati isn't even the only connection worth killing anymore. Film Critic stops a lot of Weyland kill methods. — Rek 13 Sep 2015