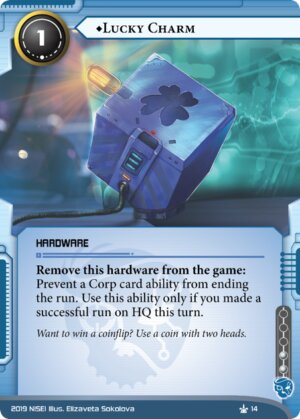 Remove this hardware from the game: Prevent a Corp card ability from ending the run. Use this ability only if you made a successful run on HQ this turn.

Want to win a coinflip? Use a coin with two heads.
Illustrated by Elizaveta Sokolova
Decklists with this card

This card is weak, because it is designed with crippling limitations.

On first sight, the effect is super strong.

This is where it gets ugly.

This is basically another limitation of LC: The alternatives and lack of synergy.

So after a run on HQ, when you make a run on any server and "trash" LC, the corp cannot end the run in any way, even if there is 2 Border Control, one Bio Vault and one counter on Nisei MK II. Is my understanding correct? If it is correct, this would save me a lot of grief when trying to steal the win from the corp on that last turn.

It prevents one ETR effect once. So you get by any of the mentioned things, but only one of them at a time.

@m.p and @Krams, thanks for clearing that up. It would be a lot of clicks investment to install 3x of this for the remote chance of having a server with 2 BC. Still, when the meta was favoring asset spam and Tour Guide, this could make running a remote much cheaper (unless I misundestood and it is only one ETR that is prevented). This make me a bit sad for a card with such a good name.

Agreed! NISEI understandably erred on the side of caution a lot in Downfall. This is an unfortunate casualty. I think even just having the text say "Install only if you made a run..." instead of "Use only if you made a run" would have been a fine compromise to make the card playable, since it is unique.

First to say, that I agree with the reviews so far, but Lucky Charm has an extremely important use in the current meta, especially in StartUp where the Anoetic Void Manegarm Skunkworks are dominating the meta. Having one of these in your hand can be a great surprise for a corp that plans on scoring their winning agenda behind a server protected by the aforementioned combo and relies on making you run on their server several times, paying for Manegarm again and again, only for you to hit their HQ and then stop the Anoetic Void on your first run in that server to take their win from their hands and mess up their server. I slot one of those in many of my StartUp decks just because of the surprise value in a meta dominated by that hateful combo.

With Anoetic Void wouldn't they just be able to pay another 2 credits and cards to trigger it again once you had prevented it the first time with Lucky Charm?

Anoetic triggers when the server is being approached, which only triggers once in a run. Therefore - no.

@Rahrhino: Nope. Since Anoetic is a "Whenever the runner approaches" trigger, it will only fire once. Once the ETR is prevented, you are already approaching, and Anoetic can't trigger again.

I guess a good way to look at it is that Lucky Charm is bad against click-taxing cards, and that was what most non-ICE ETR effects were back before System Gateway released. However, it's much better against credit-taxing cards, which is what Manegarm Skunkworks is; and it also happens to exploit the fact that Anoetic Void can tax multiple clicks, but not on the same run, meaning that one of Lucky Charm's main drawbacks doesn't matter against Anoetic in particular. So it works particularly well against the Skunk+Void combo. It'll still be bad if there's any paid-ability ETR effect on the same server, though.

So, the obvious purpose of Lucky Charm is as a counter to instant run-ending effects like Border Control and Nisei MK II. As the other review points out, it's pretty bad at this job, due to having way too many limitations (it does reduce the cost of a Border Control + Surveyor server, because the HQ run is going to be cheaper than running the server, but typically not by enough to actually get in, and it doesn't save clicks, only credits).

Still, cards in Netrunner are often usable for non-obvious purposes. In particular, there's a strategy known as "trigger stacking". Think about a card like Aeneas Informant; seems pretty innocent, right? If you try to use the card for a little bonus economy, which is its obvious purpose, it doesn't do very much. However, say you install it along with a couple of other cards with the "Whenever you access a card with a trash cost not in Archives and do not trash it" trigger (like, e.g., another couple of Aeneas Informants). Now, it suddenly makes sense to start running the Corp's PAD Campaigns and intentionally failing to trash them, in effect clicking for 3. The card normally has a bad effect because the trigger doesn't naturally happen often enough to be worth the reward, but if you're stacking up a lot of cards with the same trigger, you can set off the trigger intentionally to get a lot of bonuses at once.

"Make a successful run on HQ" is a trigger that's pretty commonly seen on cards. So that means that Lucky Charm might potentially be viable in combination with other cards with the same trigger; running HQ just to trigger Lucky Charm isn't worth it, but triggering a lot of cards at once might be. Unfortunately, it won't be as simple as just running an unprotected asset, but there are cards like Feint whose entire purpose is to trigger successful-HQ-run triggers. So you can imagine a deck that plays a few Feints, a few Lucky Charms, and many cards that care about whether you get into HQ, and maybe the Lucky Charm will be viable!

Unfortunately, the picture isn't as rosy as it seems from this. The problem is, that you don't just care about getting into HQ; you care specifically about getting into HQ when you're planning to make an important run later in the turn, and lots of successful HQ run triggers don't help that much for that purpose. Sure, Gabriel Santiago: Consummate Professional's trigger is nice, but that 2 is almost certainly more than the cost of the HQ run in the first place, and running as Gabriel is simply just going to entice the Corp to put extra ICE on HQ. So although there's a wide spread of possible triggers you could stack with Lucky Charm's, only a few of them are actually useful in practice.

The second-most viable trigger stack I've discovered with Lucky Charm is Silhouette: Stealth Operative along with Wari. The idea is that you get into HQ using Feint, allowing you to expose a piece of ICE, in turn allowing you to guess what it is and bounce it back to the Corp's hand, making the scoring server just a little smaller (ideally you would bounce a Border Control). Then you get to run on the scoring server, and avoid one ETR on the way. Especially when combined with Inside Job, this can get you into scoring servers that are much deeper than the Corp might expect, even without icebreakers (normally you can get through a 3-deep server even without any appropriate breakers). This is a fun thing to do if you really badly need to get into a scoring server to stop the Corp winning. Is it competitively viable? Well, the combo itself has an effect of the required level, but unfortunately it means that you have to put several otherwise terrible cards into your deck (Feint? Wari? Lucky Charm?). So any deck that's trying to do this is doomed to be fundamentally inconsistent and too tight on deck slots. In other words, it's jank.

That said, there is one really strong trigger stack involving Lucky Charm, which has impressed me a lot and makes me think that the card does indeed have a home: Lucky Charm together with Apocalypse. Just like Lucky Charm, Apocalypse has a requirement for a successful run on HQ (which Criminals can often accomplish conveniently using Feint). It also has a requirement for a successful run on R&D; that isn't a scoring server, but it's another server that tends to be well-protected. If you simply make the HQ run first, then having a Lucky Charm installed will make it a whole lot easier to get into R&D. (This is especially the case because you don't care about, e.g. " Trash 1 program." subroutines on an Apocalypse run, because you're about to blow everything up anyway, so Lucky Charm is enough by itself to get past otherwise very taxing ICE such as Archer.) Even better, Apocalypse is definitely a competitively viable card, and Feint is definitely viable in an Apocalypse deck because it saves so much money when doing the Apoc runs. (You can combine this with the Wari combo if you're a jank fan. It might not even be bad! But in practice, I've found that typically the Wari setup is unnecessary for a Lucky Charm Apoc deck; typically you have enough bypass to get into R&D even without it.)

Conclusions: Lucky Charm is a bad card… unless you happen to have a deck that needs to be able to run difficult servers and needs to do so on the same turn as an HQ run for some reason. In other words, this is a card for your Criminal tri-run decks (generally Apocalypse, although I guess if you prefer Exploit or Quest Completed or Notoriety or whatever, go mad). It isn't a (viable) hate card; if you're trying to get around the Corp's run-ending effects, you'll sadly have to look elsewhere, so run it only if it's a perfect fit for what your deck is trying to do.

Does lucky charm also work for any subroutine (for example a wall of static or vanilla)? Or just things that say "end the run" that they're not from the corp?

(Downfall era)
valerian32 137
Yes, that is correct. It can be used against WoS or Vanilla or any other normal (single) ETR sub. — BlackCherries 3 May 2019