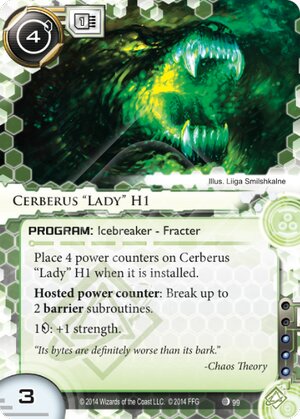 When you install this program, place 4 power counters on it.

"Its bytes are definitely worse than its bark." -Chaos Theory
Illustrated by Liiga Smilshkalne
Decklists with this card

Isn't that enough? :-) And it's in the faction with all the tools to recur programs: Clone Chip, Test Run, Levy AR Lab access. Probably it's not enough to leave all the other fracters in the binder, but I can see a shaper deck that uses Lady as the primary fracter, tutoring a Snowball only if the corp has a lot of small barriers, as Wraparound and Ice Wall.

At last, a reason not to play Corroder!

All the efficiency of a fracter breaker, without having to pay per subroutine.

If you're a Shaper deck, you now need good reason not to play this card.

NB: good reasons include "I don't want to have to use my recursion on my fracters, every time I've broken four barriers", "I would prefer to set up a long game rather than have an explosive attack" and "7 credits is still a lot to spend to make a 4-cost card break an Oversighted Curtain Wall".

The middle one's key. A lot of Shaper decks are set up for good long game. Lady Cerberus Dog's not conducive for this plan, alone. (Unless you're facing a barrier-light deck, a lot of Paper Walls, or Wraparounds with Atman back-up.) She's almost anti-synergistic with Magnum.

But not quite. And she will be great in a Chaos Theory rush style deck which wants to spend influence on Faeries and D4v1ds or things like Account Siphon, breaking barriers only on a crucial run.

Or, indeed, the upcoming Code Siphon. Use Cerberus to break through a couple of Elis on the way to installing your Battering Ram. (In this dream world, there's no such thing as memory constraints. Of course, with disposable breakers, you don't need to worry about this.)

As a 4 cost program you will actively want to trash, she's the best friend of Exile, or any other deck wanting to maximise Scavenge use.

This is one head definitely better than three: while Cuj.0's maybe worth playing, and Rex ... isn't really due to lack of multi-sub Code Gates and (in shaper) negligible advantage over Gordian Blade, you generally won't want to go full Dog Deck, for fear of overstretching recursion.

Still, Deus X, Sharpshooter and Lady are a nice package of "emergency" breakers to be tutored up with SMC, particularly in CT or Kit (if you don't have a codegate breaker out with her, you're doing it wrong).

Now that this card is no longer on the most wanted list, a new day is breaking for this fracter. In the world after the first rotation, the second core and the first banlist, your options for fracters are limited. You will need to compare this to the superstar fracter of the day, which is Paperclip. The comparison to paperclip:

This card is not going to beat paperclip as a splash, but within Shaper it has a chance. It is still the super efficient breaker it has always been. It is also suited for the shaper nonsense such as Scavenge, or with Brahman to reset it. I think this card has a place in many shaper decks that want to spend their influence elsewhere. When you play Lady, you will find that the drawbacks aren't all that bad. The limited uses mean that eventually you will need to find a second copy, but most games will not go to the third copy. That might sounds like Lady is expensive, but that is not really the case. What you are actually doing, is paying the breaking of barrier subroutines in advance.

Combined with Pelangi, a Shaper can pass the strongest for very cheap. To top it off, Simulchip allow Cerberus "Lady" H1 to get its token back. Rejig could also be used for the same effect.

At 3 inf, there is no reason to splash it elsewhere. Corroder and Paperclip are better alternatives.

The single most efficient fracter in the game. It has limited uses, so it's best to have a backup or a way to "refresh" it (Scavenge or Test Run after trashing it). The influence cost is prohibitive to anybody but Shapers, but they're likely to get the most use out of it anyway.

(All That Remains era)
CJFM 2257
Combos extremely well with London Library. — MidgardSerpent 15 Sep 2015
It does pair with the library except all the clicks that costs. — FightingWalloon 3 Jan 2017