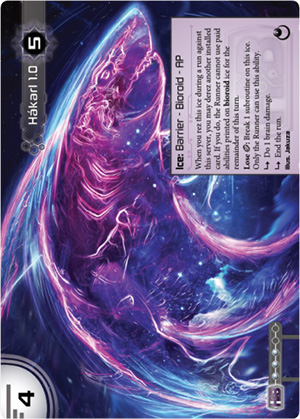 When you rez this ice during a run against this server, you may derez another installed card. If you do, the Runner cannot use paid abilities printed on bioroid ice for the remainder of this turn.

Illustrated by Jakuza
Decklists with this card

You better have a good target to derez. If you compare this to Eli 1.0, you are paying an extra 2 credits for its rez ability, and that's not a small fee. Sure, you have a better chance to land a brain damage and end a run, but if that's your main reason to play Hákarl, there's a few problem with it:

So therefore, you are not playing Hákarl for its subroutines; you are playing for its wombo-combo potential. For example, you can derez:

But the big question is: Is this worth an extra 2 credits over Eli 1.0? So far, there's not a lot of good use of this card, so I'm hoping this will change once the entire Midnight Sun set is released.

This card is a $2 premium over an already mediocre Eli 1.0. The only on-rez effects which might be worth considering at a $2 premium are Regolith Mining License and super-janky Anemone, but nobody is less able to spend $5 and 3 influence on rotten shark meat than an Anemone player.

Even if there were an on-rez effect worth a $2 premium, the timing for when you might want to derez something is very limited and an ice will never be the most reliable way to deliver a derez on demand. If derezzing ever becomes a thing, Divert Power does it a lot better than Hakarl. Divert Power can derez multiple cards, it can give you a powerful ice at a discount, and is much more efficient on $ and influence.

Some unsolicited ideas for game designers: