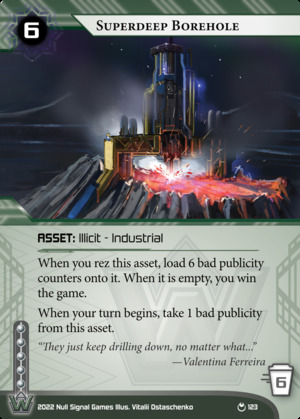 When you rez this asset, load 6 bad publicity counters onto it. When it is empty, you win the game.

When your turn begins, take 1 bad publicity from this asset.

"They just keep drilling down, no matter what..."
—Valentina Ferreira
Illustrated by Vitalii Ostaschenko
Decklists with this card

If you're playing the Outfit, this is basically an Eve campaign :D

I don't think decks high on bad publicity have much of a long game, and the side-benefits of generating bad publicity are very slight (+$3 for The Family, Regulatory Capture needs 4+ bp to be scorable out of hand, and Broad Daylight is underwhelming at any amount). I don't think the synergies currently exist for Borehole to be playable even if you somehow could keep it alive 4 triggers. (If you can't keep it alive 4 triggers, Hedge Fund is more lucrative).

All over the years we have kept our words, give you the best Hacking services the world have to offer, putting smiles on your faces. I can proudly say we are still the best equipped group of Hackers, as long you trust in us, we will track down and recovery back your fund to you from the most difficult internet SCAMMERS. NOTE!! We've successfully done that many years back and now we are more faster better and stronger. Do contact us on ➡Binary Recovery. ➡University Result Upgrades ➡Wiping Criminal Records ➡Social Media Hack ➡️ Raise your credit score ➡Blank ATM Card ➡️Loans and wipe ➡Phone Hacking. ➡️ Private Key Reset ➡️ Data Base hacked/retrieved.etc Border us with your jobs & allow us give you positive result with our hacking skills. Email pointekhack@gmail.com recoveryfundexpert@gmail.com cyberhackertap@gmail.com we Guarantee you up to %95 REMEMBER YOUR HAPPINESS IS OUR PRIDE 2023(c) All Right Reserved

The idea and lore of this asset is amazing, but you will lose most of the time if you use it, even in The Outfit: Family Owned and Operated. After 3 turns, most runs becomes quite inexpensive, which will let the runner hammer your centrals like no tomorrow. At the end of the count down, the runner can run and run again to pass all the ices, because bad pub reset at every runs.

If you do not win at the end of the count down, you'll have to struggle with 4+ bad pub. Of course, by then you can score Regulatory Capture from hand, if the runner does not find it first.

Your best bet is probably use it as early as possible, before the runner can setup countermeasure. Also, you'll be quite vulnerable to Pinhole Threading, forcing you to spread your ices. Winning with this asset will feel amazing, if you accept the challenge.

The art is amazing, colorful and inspiring, just as the name and quote. Fun card!

This card is unbeliavably cool and twice as weak.

This card looks very bad. However, it is actually quite good and valuable for Weyland decks using Regulatory Capture.

Taking bad publicity is generally bad. You're generally supposed to be compensated with money for taking bad publicity. This is why Hostile Takeover, Too Big to Fail, give you big money in exchange for taking it, so the corp accelerates their game to try to win before the runner get get too much leverage. This card, when you rez it, you LOSE 6 credits, and you take a bad publicity. And increasingly more bad publicity, not profiting from it at all (you profit a little if you are The Outfit: Family Owned and Operated.)

The trash cost is high, but its win con only lets you win after a ridiculously long amount of time, and the closer you get to winning, the easier it is for the runner to trash it. So as other reviewers say, it looks more like a Tik Tok challenge than a part of a legitimate strategy.

The point of this card is the following.

You play a big-money bad-pub weyland deck like The Outfit: Family Owned and Operated or Weyland Consortium: Building a Better World. You have 3x Hostile Takeover, big 3 pointers, and 3x Regulatory Capture. You probably have Punitive Counterstrike, to force the runner to play around that.

Good news, 8 turns went by. You scored 2 Hostile Takeover from hand. You scored Send a Message, simply IAA'ing it like a boss because you had 40 credits and the runner only had 15, and they had to respect the double Punitive Counterstrike. So you're now on 5 points.

That's when you install the Superdeep Borehole. You rez it at the end of the runner's turn, taking 1 more bad pub, to a total of 3. Now, the runner absolutely must trash this thing on their turn, or you will get to 4 bad pub on the start of your turn, and be able to score Regulatory Capture from hand for the win. If the runner is a Nyusha "Sable" Sintashta: Symphonic Prodigy on Tunnel Vision, odds are they won't get past your remote server ice on this short notice anyways.

Congrats! You managed to get 2 bad pub from the borehole. You can now simply Extract the borehole, you don't need any more bad pub, and its built-in win con is goofy anyways. Now you simply draw into Regulatory Capture and win the game.

What's that? The runner huffed and puffed and trashed your Superdeep Borehole before you could get a second bad pub from it? That's okay, install another. If they don't trash it (face down) before the start of your turn, you'll get your 4th bad pub and proceed as planned. If they do, they paid 6 to trash something that you didn't even rez.

Or, at this point, just draw into the third Hostile Takeover. Then you are at 4 bad pub. What's a runner to do.

So, particularly in the (Parhelion) startup meta, this card is key to any weyland decks that want to run Regulatory Capture, because this and Hostile Takeover are the only ways for you to get bad publicity in Parhelion startup. And while it may seem crazy expensive for what it does, because it gives you a path to score Regulatory Capture as a 2/2 from hand, it creates a win con that is actually very hard for the runner to disrupt. You don't need to have both a 3/2 and Trick of Light in hand, and have advancement counters on the board, to fast advance. You don't need to have Biotic Labor and a pile of money and a 3/2. You just need to have played normal weyland for a while, and at some point installed a borehole that stuck around for two turns. And you don't have to try to score a second 5/3 pointer behind ice to win anymore, which is often the achilles heal of Punitive Counterstrike decks, which gets mooted once the runner steals 4 points from R&D before you can win.

So, contrary to what other reviewers are saying, do not "install this early", and don't focus on the "when it is empty, you win the game" text on the card. Install and rez only when you are 2 points from victory so that all you have to do is draw into Regulatory Capture to close out the game.

note that the runner only pays $5 at most (not $6) to trash SDBH, because at least $1 is free from the bad publicity credits.

(sorry for the typos, but I use dictation and didn't catch them, and Netrunner DB won't let me edit the comments after posting.)

I like the plan with Punitive Counterstrike. It is a fun plan. But from experience, like @D4v1d-Gr43b3r says, by turn 3 (with 3 more turns to go), the runner can just run non stop with almost no penalty to their economy, allowing the runner to check centrals non stop. To remedy this, you could use Sandburg to make running more expensive for the runner. But then, there is always Endurance... Good review and nice ideas, thanks for sharing!

ASOREHACKCORP is a financial regulator, private investigation and funds recovery body. We specialize in cases as regards ETHICAL HACKING, CRYPTOCURRENCY, FAKE INVESTMENT SCHEMES and RECOVERY SCAM. We are also experts in CREDIT REPAIR, we analyze what’s impacting your score. All software tools needed to execute RECOVERIES from start to finish are available.

Contact our support team as soon as you can via the email address below to get started. asorehackcorp@gmail.com

half the reviews and comments on NetrunnerDB are becoming spam. the maintainers should add a report or at least downvote feature.