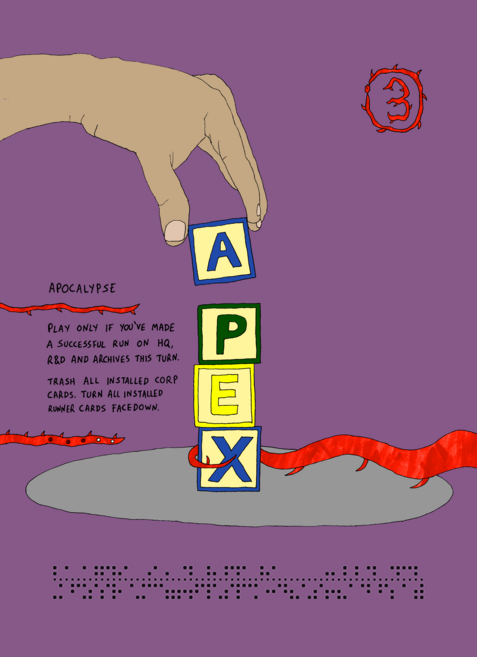 Apex is a fun noodle friend, but sometimes Frankie and Alexa won't eat their noodles, so you have to trick them with letter-shaped pasta. Kind of a flimsy justification for a deck name, and I admit that paulyg's suggestion of Armagedmom is better. Please feel free to use that instead.

But I already had downloaded this image by the time I got that better suggestion: 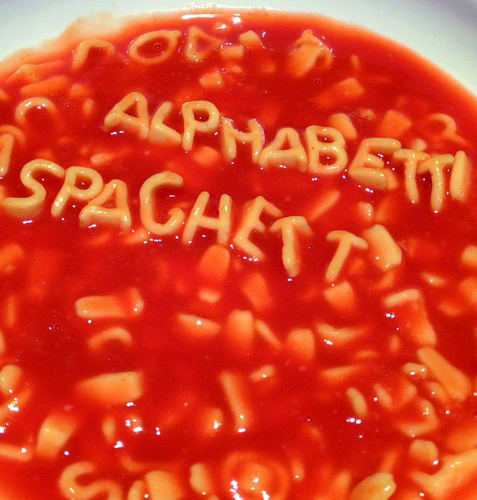 I went 3-2 at the Philly Store Champ with this beautiful deck. I also Apoc'd a SSO deck, which felt better than any of my three victories.

The thinking behind this deck is that with Underworld Contact gone, Sunny doesn't really have a very easy time setting up some inevitable board state that is going to roll over a corp. So if you can't have a board state, why should the corp?

And once you start thinking about Apoc in Sunny, you'll find the Globalsec faction has a few really delightful Apocalypse enablers:

It certainly helped that corps quite understandably didn't put me on Apocalypse. And it really helped that they instead assumed that as Sunny they need to go fast and put more ice on the remote. I probably would have done much worse if I had loudly proclaimed what my plans were when I walked into the game store.

But I went 1-0 vs. my pal Laura who knew what I was doing, and I think that's a pretty representative sample.

I think this deck isn't totally unplayable now that I am letting the secret out, and I have a few thoughts about what can be tweaked:

As always, thank you for your indulgence.

I don't know if it's going to be a slow week on NetrunnerDB and this middling Sunny performance is enough to get any attention, but in case it does, I'm hosting a Store Championship on April 20th and I'd love for you to come.

P.S. Here is a two second video of the corp being mad at this deck