Jesminder - Surf And Turf (45th at US Nationals)

This is the runner deck I took to Nationals. 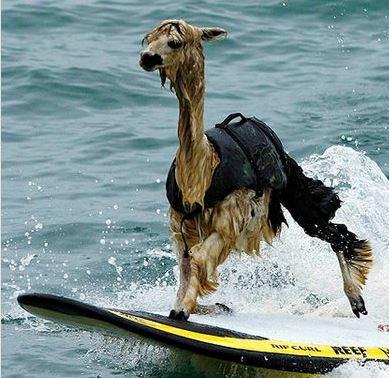 Yeah, I know that is a Lama and not a Lamb, but I could not find a pic of someone dumb enough to surf with one...

It was born of a story deck I created that used all the cards associated with Jesminder Sareen (Akshara Sareen, The Price of Freedom, Patron, Maya, etc). I also added in 2 Stim Dealer. It was fun, it was a terrible deck if you were interested in winning,

Then I saw @Jandersoncad's Frantic Knife Throwing during the stream of the Georgia Regional Champs and I figured that I could adapt it to my Shaper chasiss and thus this deck was born.

Side note, I played terrible during Nats. This write up is not about how awesome my deck was or my how mad my skillz were, they weren't. I placed 45th in a field of about 60.

This deck is about lessons learned. The deck isn't bad, but it does suffer from a dilemma that all Magnum Opus decks much deal with, for s, or for cards, or make runs. You can usually do 2 but not all 3.

As there was functionally no Best Defense at the tournament so Algo Trading was a good call... I wish I had put in 3 instead. This card does a lot of heavy lifting economically and the earlier you see it the better. This is the card that just keeps growing and growing until you need it. You need to dig for answers in your deck, pop it and you can stop clicking for credits for a turn or two. HHN? If they do not pay 1 more than you have in your pool, then pay it (think of it a self inflicted Vamp and pop your an Algo to keep on going.

Lets talk breaker suite. R&D and remote lock is the game here. I got this deck all wrong. I should have gone 3 Laamb and a Maven. I could have surfed for days with multiples of Laamb out. Maven as a backup is cool because you have so many programs out and that is protection against Mti Mwekundu: Life Improved decks ruining your day.

For my programs I would have put a 3rd Dhegdheer. I liked my tech cards but I never really needed Clot (I never faced Titian) and if I was willing to give up my singleton Stimhack I could have added in a second Surfer as a backup.

The only other card I would want to add is a 3rd Sacrificial Construct because Skorpios Defense Systems was a thing.

I think with those changes I would have probably beat at least one of those beastly Jinja decks (having the Algo money so I could dig for Mad Dash and still threaten servers would have been sweet and getting SacCon earlier would have possibly made my Skorp game manageable.

People kept asking why Jesmider and Maya. Well it makes cards like Data Raven and IP Block cry and Argus Security: Protection Guaranteed less painful. Also,you can bottom R&D cards that you absolutely do not want the Corp to have with your console.