The start of turn 6 for an average run: 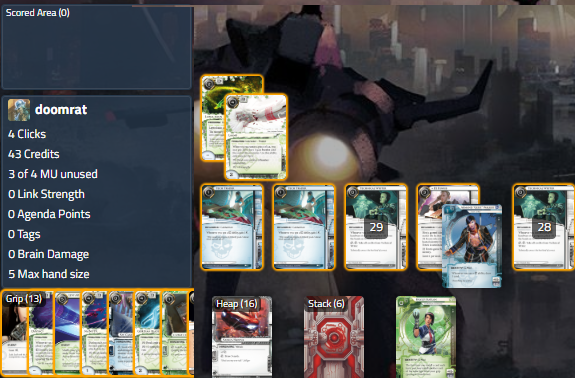 First off I want to apologize to everyone for publishing this. Personally, I wanted to let it fly under the radar until it could be addressed, but someone, who is totally not @whiteblade111, insisted that they were taking it to Store Champs. That being the case, I wanted to get it out in the wild for the sake of fairness. If we need to assign additional blame, some can go to @errantmage for giving me this idea, Michael Boggs (for DJ) and Lukas Litzsinger (for Tech Trader and Gheist).

The goal here is to get DJ Fenris down as quickly as possible, selecting Geist as our G-Mod, and a couple of tech traders. Once you do that, just start chaining installs. An action sequence might end up looking something like this:

Once you have effectively infinite money (usually by turn 5 or 6), install your breakers and durdle with your Spy Cams until they put something in the remote or you win off R&D. Laamb needs to go on the Leprechaun so you can keep triggering DaVinci and SMC as needed for additional draw and credits (as if you needed it at this point).

Things that beat this deck (and appropriate Counter-Counter-Tech):

Ark-Lockdown. You'll need to just play well to beat this. Make sure that you don't let all of any of your engine cards (DaVinci, Clone Chip, Sports Hopper, Spy Camera) sit in the bin together if you suspect they have this. Under The Bus. If they trash your DJ you'll have to levy and find it again, which is a significant slowdown. You can beat this way Dummy Box if you want to go that route. MCA Informant. Like Under The Bus but worse. Dummy Box is less effective here, you probably just have to trash DJ and find him again. Scarcity. You can probably just push through this one and go a little slower, but bring interdiction or government investigations if it makes you feel better. Personality Profiles (lol). This card is bad, but it does beat you. If someone actually has this just shake their hand.

There's a jnet glitch if you get a Hayley Trigger while installing DJ Fenris. If that happens you can fix it by leaving the game, refreshing your browser, and rejoining.