After my disappointing performance at Continentals with the previous version of this deck, I was a bit down and thinking of switching to Maxx or 419. Thankfully @ctz talked me out of that dumb idea. The deck remains a blast to play with some good decision points and decent matchups with a few tweaks from last time.

Noticeably, I replaced the Marjanah with Paperclip. The Marj is fine if you're expecting nothing but Hagen and Vanilla, but miserable against Brân 1.0 and next to useless against the Data Wards I was expecting to see a lot of out of Acme decks. I needed a real fracter and Makler doesn't solve the problems anyway, so the Clip was it. I cut the Deuces Wild to afford the influence, so added another Class Act and Jailbreak to help with draw. I also reluctantly swapped the Embezzles back to Diversion of Funds - they're not as good as in 419 where you're specifically playing to kill their economy, but sometimes reducing corp credits is a good thing.

In the swiss, it beat PD once, Acme once, and CtM once. I tied with another Acme (hint: Exchange of Information is rough) when I missed both Bellona when Jailbreaking a 4-card HQ on the very last turn of the game. In the cut it beat another PD and the same CtM.

The deck was something of a meta call - few people were on High-Profile Target, which you basically die to immediately. Market Forces and Exchange are rough but you can deal with them if you're careful. Salem's Hospitality is annoying to deal with, so try not to have both Counter Surveillance in hand if you suspect one. Out of nowhere but surprisingly present at OtG was Keegan Lane, who also probably wrecks you. The deck has a reasonable if not favored matchup against Sportsmetal, depending on how quick you can get set up. Docklands Pass and Sneakdoor Beta are excellent cards in the matchup, because they don't want to bother to ice Archives. Just steal all the 2-pointers or an early Vacheron and avoid the bad 1-pointers, not hard really. XD Against almost any other deck, if your opponent doesn't immediately trash your Rogue Tradings once you click them once you should probably take the remaining 12 off them and be thankful.

Lastly, for @spags, who was a great and game opponent who had a miserable time playing against this deck twice with his BOOM! CtM (hint - find Obelus and get to 7 hand size as fast as you can): 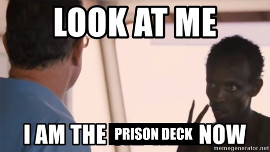