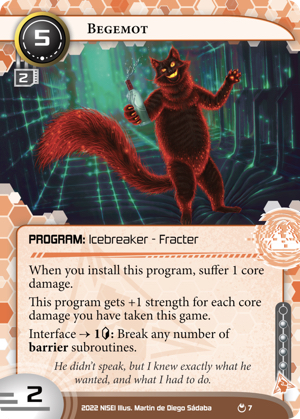 When you install this program, suffer 1 core damage.

This program gets +1 strength for each core damage you have taken this game.

He didn't speak, but I knew exactly what he wanted, and what I had to do.
Illustrated by Martin de Diego Sádaba
Decklists with this card

Let's assume you are also playing Marrow and other core damage cards, so early in the game it's plausible that you can do 2 core damage to yourself. If you then install Begemot what does that help you do?

You can break all of these ice for 1:

So, this looks like a potentially high impact card in Esâ Afontov: Eco-Insurrectionist, a runner that often isn't rich in the first place. This may help a lot in the Haas-Bioroid: Precision Design matchup for instance, because you will be able to contest servers much more cheaply, for Chastushka and Light the Fire! runs.

For comparison, many runners break Eli and Hagen for 2 using Boomerang. But this requires you to draw Boomerang, and spend a click installing Boomerang. And you can only have one Boomerang installed at a time. So Begemot would save you a lot of clicks compared to that.

The card has some significant drawbacks though:

Breaking Bran cheaply is very attractive because you need to land your Chastushka's and then be able to check archives. So this definitely can help your game plan.

So this looks like an Esâ Afontov: Eco-Insurrectionist that's all in on brain damage and not on Avgustina Ivanovskaya and viruses. Maybe less sabotage potential but more consistent landing of Chastushka?

Another point: If you are on Begemot then you no longer have a good reason to use Chisel + Devil Charm to blow up Bran 1.0. You can reserve that particular power tool for troublesome code gates and sentries, which will help make all the servers more porous.

This sounds like a fun version of Esâ Afontov: Eco-Insurrectionist. But this is a runner that needs to breach servers to win. Without a lot of room for Fermenter and without Keiko you are going to miss out on a bunch of econ opportunities that power many contemporary Hoshiko Shiro: Untold Protagonist decks.

As corp, if I see you install this, I will likely assume you aren't on Stargate because of memory pressure. You may not even have a lot of room for Imp. That takes a lot of pressure off of me to ice up R&D, and let's me put ice everywhere else instead, which is probably a bad thing for Esâ Afontov: Eco-Insurrectionist.

Ultimately this will give the corp a lot of headaches. A lot of servers that are taxing for almost all other breakers will suddenly not be so taxing, and you won't really have any counterplay like you do around Botulus. And many alternative ways to make taxing servers, like Manegarm Skunkworks and Anoetic Void, will get blown up by Light the Fire!. (NEXT Activation Command might still help you score though.)

So, everyone will splash Gold Farmer now?

You need to read the card again. It is ANY number of barrier subs for 1 credit.

Seeing the face of the NBN player using Endless EULA, then you put Begemot on the board and make that ice cost 1 credit to pass! Priceless.