Who or What is Complete Image? - 1st at Aldershot Regional

Who or What is Complete Image?

I'm sure most of you are pretty baffled by this deck, so let me run you through the combo:

The key thing, is that with this ID, Complete Image can do a guaranteed 3 net damage if the runner has 2 cards, (so long as you know one of them), and can have a 50-50 to do 4 damage if they have three cards.

Between Salem's, Punitive, and Complete Image, there are so many ways to land a kill, and you can even ensure that those pesky Anarchs can't have had worse while you are at it!

House of Knives, Kakugo and Obokata give the runner a tough time ending every turn with 5 cards in hand, and lets you keep an eye on their grip for your other pieces to do their magic.

This deck definitely still has room for refinement. Saisentan is unlikely to land a kill, and really isn't very taxing. Standard Procedure pretty situational, and though it melds well with the game-plan, it's also the only place you can swap cards out for influence.

As for other cards worth including, I think a few copies of Snare! would be a valuable include, as it gives more chances for the runner to slip up and die to Complete Image, and a Cerebral Overwriter could be super valuable, as the runner taking brain damage is a veritable death sentence. Similarly Curfew would be a good include as it would also enable a kill if it's not cleared.

The lack of Neural EMP in this list is also notable, and surprised some people. However as it never helps with Complete Image since it eats the ID trigger, it's just not worth the slot.

As for vulnerabilities, this deck isn't so hot if the runner's got some damage protection, or trashes the kill pieces.

Round 1: vs Sam Bull on Smoke

Sam, having encountered me playing this deck before, played excellently against it, actively keeping at 5 cards in hand, and making sure they never had any duplicates in hand, while still maintaining pressure, and getting out of punitive range when stealing agendas. So, my only out was to go for the 50-50 kill from double Salem's into Complete Image, which he survived, earning him a much deserved win.

Round 2: vs Toby CD on MaxX

As is some sort of tradition, I got paired against my brother; but for once I was the one to come out on top. MaxX milled a lot of econ, leaving them too poor to survive a pair of Punitives.

Round 3: vs Sergio Marques on Valencia

Sergio played well against me, keeping out of punitive range, but made the fatal mistake of holding onto two copies of I've Had Worse which I spied with a Standard Procedure, which let me get the guaranteed kill the following turn with double Salem's into Complete Image.

Round 4: vs Tom McBride on MaxX

Tom made the early mistake of playing a Stimhack against me, which would have made for an easy kill had I had access to a Complete Image, but he'd trashed one out of hand turn two, and another out of R&D towards the end of the game. But they let me get to 6 points, which let me sneak out a House of Knives for the only win from scoring out I've had with this deck on the day.

Round 5: ID into the cut, being paired against Peter Cox on 419.

Round 1: vs Michiel Questier on Freedom

Unfortunately Michiel was given a game loss for a deck-check, giving me a free pass for the first round.

Getting the game that was skipped vs Pete in the swiss, Saisentan did the first thing of value all day, destroying their entire grip. It wasn't long before Pete took an Obokata, but survived with 5 cards in hand, 3 of which were known to me, at which point I luckily top-decked a Complete Image letting me play Punitive into it for the win, putting me into the finals from the winner's bracket. 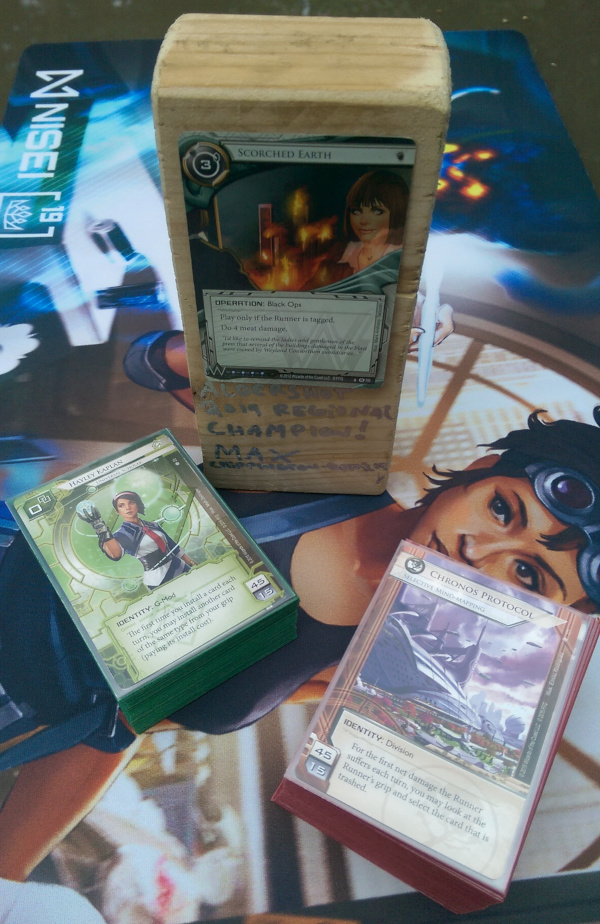