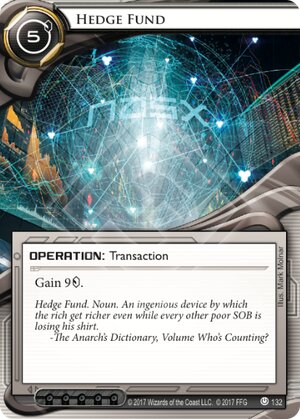 Hedge Fund. Noun. An ingenious device by which the rich get richer even while every other poor SOB is losing his shirt. -The Anarch's Dictionary, Volume Who's Counting?
Illustrated by Mark Molnar
Decklists with this card

See Sure Gamble for similar review ;) This card is pretty much identical, and there is a great Pro/Con review under Sure Gamble. It is a staple economy card, and all economy Operations should be compared to it - 5 credits investment to make 4 credits profit.

Sweeps Week usually provides the same bonus, for only 1 investment but only certain times it can be used.

Successful Demonstration gives a 5 credit profit, for a 2 investment but the requirement that you stopped a run, which usually means either a) you're Jinteki: Replicating Perfection and they just jacked out of a central to run a remote, or you rezzed an ETR they couldn't break, which makes it a bit more difficult to fire.

Celebrity Gift is two clicks but gives a seven credit boost, (So six credit gain if you count that click as 1 credit) at the cost of revealing your secrets.

Beanstalk Royalties is 0 investment, but only 3 credits (but can help you get up to range for a Hedge Fund

Restructure is a whopping 10 credit investment, but does give you 5 in profit

You can see, all of the burst econ Operations give you 3-5 credits for a single click (the double of Celebrity gives you that 6th :P) but if you want more credits you either need a higher investment, or a situational trigger

(Breaker Bay era)
lynkfox 380
Best econ card is Paywall Implementation in certain decks. Cost 0 and can net up to 10+ creds or discourage the runner from trashing your assets which is even better. — Neuro 26 May 2015
3

The most boring card in the game, along with Sure Gamble. Also the most ubiquitous. I bet you forgot it even had a theme. You just see the moustache guy and take four. Unless your deck has a strangely robust economy, you should probably have some Hedge Funds in it.

Sure Gamble and Hedge Fund, two cards that are identical apart from which player they belong to (Sure Gamble on the runner side, Hedge Fund on the corp side) hold a special status in Netrunner (to the extent that they were reprinted in System Gateway, a set that otherwise intentionally avoided reprints). They're generally considered sufficiently better than the other cards that do the same job that they're a 3-of in the vast majority of Netrunner decks; no other cards are quite that ubiquitous (even Paperclip sometimes loses out to speciality fracters which fit the deck better, and some decks don't run fracters at all, but every deck needs economy).

Unsurprisingly, Sure Gamble has collected a range of reviews, so it's surprising that Hedge Fund's review page is fairly derelict, mostly saying "this is just Sure Gamble on the corp side". That's a pity, because as the Runner and Corp are so mechanically different, the effect of Hedge Fund and Sure Gamble on the game can be quite different from each other. Let's fix that.

Starting from the start, Hedge Fund is pretty much a pure economy card – as long as you have at least 5, you can trade your Hedge Fund and a click for four credits. This is generally considered a pretty good rate of return, and if you're running a "normal" style of deck, it's hard to match this; so in any Corp deck that wants economy, and almost all decks do, Hedge Fund is normally good enough to win itself three deck slots. However, it's worth noting that Hedge Fund is notably less powerful than Sure Gamble – Sure Gamble is often the best card in the deck it's in, whereas Hedge Fund is quite frequently beaten (but still good enough that it typically gets a deck slot anyway). Let's look at some of the reasons why:

Despite all this, Hedge Fund normally ends up meriting three slots in most Corp decks, even though deck slot competition is really high there. Partly this is because Sure Gamble is one of the best cards in Netrunner, so "it's worse than Sure Gamble" isn't in itself a reason to reject a card; almost every Netrunner card is worse than Sure Gamble. Partly, it's because Hedge Fund is one of the best ways to make money quickly on turn 1, whilst leaving clicks over to do other things; if you want to be able to rez an Anansi on the Runner's first turn, or want to threaten being able to rez a hypothetical Anansi that you didn't draw, then Hedge Fund is the easiest way to reach the appropriate credit total whilst still leaving clicks to install ICE. As such, Hedge Fund's value in the early game is often high enough that it benefits even decks for which it's mostly outclassed later in the game.

The other big reason to run Hedge Fund, and something that isn't applicable to Sure Gamble at all, is that it does not have a trash cost. This means that Hedge Fund passively helps to save you from repeated R&D runs. Now, there are plenty of cards without trash costs in Netrunner, but most of them have fairly fixed roles in a deck – depending on the needs of your deck, you'll have some specific number of ICE, be able to afford a certain number of non-economic operations, and so on. Economic cards are more interchangable, and most of the best economic cards are assets or agendas, therefore trashable or stealable from R&D. Hedge Fund has the advantage of being an operation with pretty decent numbers, so you can run it in a slot that might otherwise have to go to an economic asset with a similar rate of return, and thus picking Hedge Fund over the asset helps make R&D just that little bit more secure. In Corp decks with a sufficiently strong economy, this will be the primary benefit to Hedge Fund late game – the 4 can become fairly irrelevant by that point, but the lack of a trash cost matters all game long.

The main consequences of all this are that Sure Gamble is in over 90% of Runner decks (it feels like over 99%, although some tournament results seem to disagree with this?), whereas Hedge Fund is a little lower; tournament results put it at 80-90%, which feels low to me (I would have estimated 95% or so), but there's definitely a consensus that nearly every Corp deck benefits from some Hedge Funds. Sure Gamble is so strong that very few Runner decks will want to cut it; in modern Netrunner, it's almost impossible for a Runner to have economy strong enough that Sure Gamble fails to make the cut (even if they can make credits than that more efficiently in the late-game, they probably want Sure Gamble credits to get their economy started). Hedge Fund is not quite as strong, so Corp decks which have a very powerful economy often consider cutting it. Still, it's sufficiently powerful that it often ends up meriting a deck slot in those decks, even if it's far from their best card.

It's also worth noting that neither Sure Gamble nor Hedge Fund is sufficient to be the backbone of a deck's economy by itself. Unless you start recycling them, which is slow and convoluted, Hedge Funds will give you at most 12 over the course of the game, and most decks spend a lot more than that (it isn't unheard of for decks to have credit expenditures in the triple digits). As such, new players should note that although a playset of Hedge Funds will improve all but the most unusual decks, your deck will also need to include a range of economy beside that, and the right way to build a Corp deck's economy can depend a lot on what the rest of the deck is doing. Hedge Fund may be a good card, but it won't carry a deck by itself.