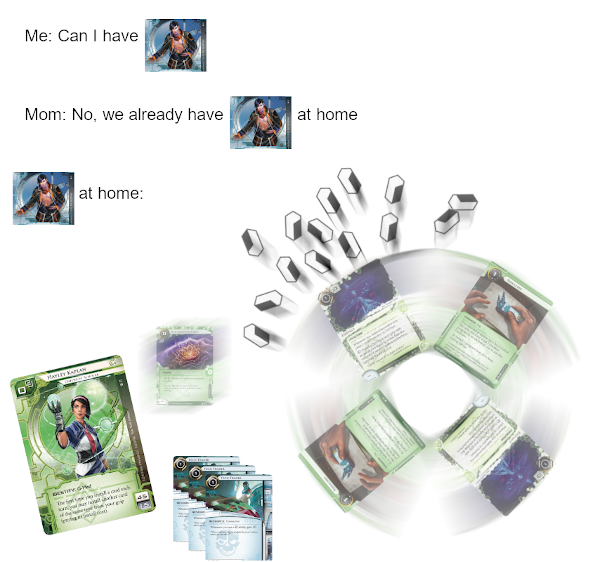 After the initial hype over @Pinsel's National Champion Geist deck was over, the fact that the only Shaper decks were literally boring kept nagging at us. So Pinsel and I decided to give the pirate build another spin and began testing decks with 3 Tech Traders. Boomerang proved to be very good at replacing the need for real breakers in both the Geist deck as well as several Anarchs that we tried, so it must also be good in Shaper.

The best feeling in Boomerang Anarch is, when you manage to get a Boomerang on your Street Peddler, so why not try to make this more consistent? The current shaper equivalent would be Paule's Café, so we tried to build a deck around that using Talut, Chameleon, Euler, and Gauss as breaking solutions. But as always (and as intended by the card design...), that proved to be somewhat difficult and clunky. We were pretty happy with the Boomerang part of the deck, but we were lacking both card draw and early econ.

That was when Pinsel came up with the idea of including In the Groove... That card already gave birth to RGB Hayley before it was even released and now it found a home in this archetype again. Simulchip becomes a normal Clone Chip again once a program is trashed and -- oh look, DaVinci has got a for us. 🤔

Oh, have I mentioned, this deck plays DJ Fenris to have access to Geist? I'll leave it to you to figure out, how many extra cards Geist has drawn you during this exchange. But let me tell you this much: You typically start taking credits from ItG at some point, because you're overdrawing too much. Also keep in mind that if you had Technical Writer on the table when all of this happened, there are 6-8 credits waiting for you on there now.

Though, since this deck is Geist imported into Shaper, it comes with the same disadvantages that the original deck has. Scarcity of Resources still hurts a lot. A Hard-Hitting News early can somewhat stop your tempo (but you got access to Misdirection to mitigate that). There are some pieces of ice, that are really awkward to break (4 strength barriers in the late game, Spiderweb, and Bulwark come to mind here).

Still, this deck made running fun for me again and I hope it does the same for you!