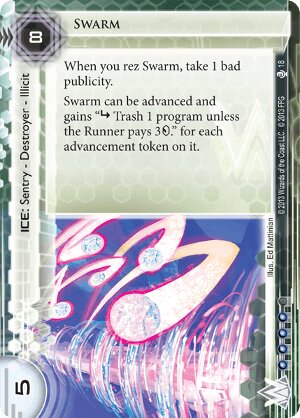 Swarm can be advanced and gains "subroutine Trash 1 program unless the Runner pays 3credit." for each advancement token on it.

How Many Bees make a Swarm?

Swarm is an advance-able ice that puts pressure on both the corp & the runner to make difficult decisions. Not even considering the 8 rez cost, the corp needs to ask, "Do I take a bad publicity and spend several turns and a bunch of credit on one piece of ice? Since it takes at least 2-3 tokens on Swarm to get it's /break ratio into positive territory (depending on the killer or AI the runner uses) At which point the runner then needs to ask, "Do I trash programs or lose a bunch of money?" For either side those are weighty decisions.

Cheap Rez: Because of the high cost of Swarm, other supporting cards that allow it to be installed for free (albiet often with conditions) make it much more attainable (in order of least to most difficult strings attached): Priority Requisition, Braintrust, Shoot the Moon & Oversight AI.

Economy: Commercialization could potentially net the corp a tidy sum if Swarm is fully stacked. In certain circumstances the corp may want to actually trash Swarm (get rid of Knight or a Femme Fatale token for example), if so having Blue Sun: Powering the Future could help recover some sunk costs.

Remove/avoid Bad publicity: Exposé, Rex Campaign, Clone Retirement, Restoring Face, Broadcast Square, The All-Seeing I, Elizabeth Mills & Veterans Program all make it possible for the corp to avoid or remove bad publicity which may take some of the sting out of rezzing Swarm. NOTE: Ireress basically negates bad publicity on a server IF it isn't broken.

Combined with strength buffing options such as Chum, Corporate Troubleshooter Experiential Data, IT Department, Lag Time, Patch etc all can improve Swarm making it more taxing especially for ice like Ninja who's 3: +5 strength range forces the runner to spend yet another 3

Can become infinitely taxing to the runner given time and economy to setup.

As a 5 strength Sentry it has some sticking power

At 8 Swarm is a big chunk of change that still requires more s & s to really get it setup.

With 0 advancement Swarm might as well not even be there, with only 1 advancement token on Swarm most runners will find it cheaper to pay the 3 rather than bother breaking it.

As a Sentry Switchblade guts Swarm for 2 stealth-based s regardless of how many advancements have been placed.

Forked and with a few more variables Forged Activation Orders Parasite etc can trash Swarm taking the 8 rez sacrifice and all the corps investment into advancements with it.

4 influence cost quite high for out of faction decks

Swarm puts a lot of pressure on the table. It puts pressure on the corp to invest a lot in it and there is no doubt it can become a taxing juggernaut but at what cost to and tempo. Facing the right runner rig a well-advanced Swarm could effectively shut the runner out of a server as both runner & corp keep a close eye on the runner's credit pool, it's a gamble with a lot of drawbacks. Perhaps someday there will be a combo where bad publicity that actually benefits the corp, if this every happens I suspect that Swarm will see more play, until then or some other possible synergy #swarm sightings will remain rare.

(Data and Destiny era)
chris_walker 677
Take another look at Howler and Awakening Center. Both would certainly be much better cards if they targeted all ICE, not just bioroids. — FarCryFromHuman 2 Dec 2015
Thanks FarCryFromHuman, Absolutely right, yeah copied that section from one of my Bioroid reviews, should have given it closer look. They have been removed! — chris_walker 2 Dec 2015
Also removed mention of Bioroid Efficiency Research again, Bioroid only! — chris_walker 2 Dec 2015
HB: Stronger Together also buffs only Bioroids. And I'm pretty sure Back Channels can't be used on ICE, cause it says "IN the server" and ICE is never IN the server. And for some reason you forgot about Because We Built It ID, which allows you 1 recurring credit for ICE advance specifically. It might help mitigate the cost of making Swarm actually do something. And I have to mention, that Forked makes this ICE incredibly sad, especially if you poured a lot of clicks and money into advancing it. — Shieldwall 3 Dec 2015
Also, Switchblade just rapes this ICE like pretty much any other multi-sub sentry under 7 str. — Shieldwall 3 Dec 2015
To the rescue again Shieldwall, thanks review has been updated accordingly! — chris_walker 3 Dec 2015
Another small mistake: NeoTokyo Grid only works on cards in and not rotecting the server. — Krams 3 Dec 2015
Thanks Krams, attention to detail is not always my strong suit. NeoTokyo Grid is gone. — chris_walker 3 Dec 2015