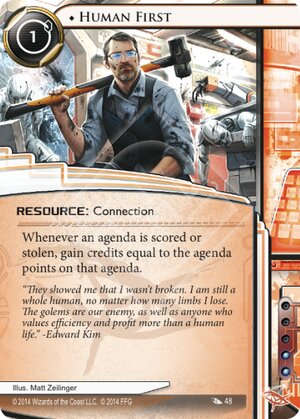 Whenever an agenda is scored or stolen, gain credits equal to the agenda points on that agenda.

"They showed me that I wasn't broken. I am still a whole human, no matter how many limbs I lose. The golems are our enemy, as well as anyone who values efficiency and profit more than a human life." -Edward Kim
Illustrated by Matt Zeilinger
Decklists with this card

This is actually a neat little economy card. It's got a lot going on underneath the surface.

Assuming you get this card down before anything is scored, the maximum number of credits you can gain over its lifetime is 12, as both players hit 6-6 (or 10 and 5-5 against Harmony Medtech: Biomedical Pioneer). Remember, if someone hits 7 agenda points the game is just over and the credit gain is meaningless.

By itself, that is crazy good. 12 credits of clickless economy!? Sign me up!

But not so fast. There are some caveats there. First thing to realize is that the later you play the card, the worse your total gain is. If you don't draw into it until the score is already 5-4, then it's probably not worth playing, because the next agenda probably ends the game.

So, to make sure you get it soon enough, you might throw in 2x or 3x. But it's a unique, meaning that every time you draw one past the first it's a dead draw, a wasted click at a time when you are likely digging to find a breaker.

This card also benefits from a very close game. If either side manages to take an early lead, the maximum benefit decreases. Even then, though, it's still a good play early game; if played at 0-0, the minimum credit gain is 4 (2 pointer then 2 pointer then 3 pointer to win the game), which is still an acceptable return on investment.

Overall, I'd say this card is powerful and versatile enough to be worth playing, and at 2 influence I wouldn't be surprised to see it appear out-of-faction.

(The Source era)
tiedyedvortex 4643
This card is a highly effective counter to Punitive Countermeasures. — FarCryFromHuman 25 Feb 2015
It's possibly justifiable to have 1 in an anarch deck, but there are far better ways to use 2 influence. At minimum I'd rather have a lucky find over this in shaper or criminal. — BoomFrog 1 Sep 2015
Paige works well with this to address the problem you describe in your 4th/5th paragraph. — Pikeman 22 Sep 2015
4

I'm a little more sceptical than @tiedyedvortex regarding this card. I agree that this will probably see at least some play in Anarch, and in particular maybe in MaxX. She cares slightly less about redundant copies, as she trashes a significant portion of what she draws, and she could probably also be built to be fast enough for the fact that this is clickless economy to matter greatly.

However, I would be surprised if this saw much play outside of Anarch. Two influence isn't huge, but considering you both want several copies (granted, two would probably be enough in a 40 card deck) and that only one of those copies are of any use, wouldn't most people play Lucky Find instead? At the cost of being slightly heavier to play, you get an instant six credits as opposed to a delayed potential eleven. For most Runners, I imagine that would be a sweeter deal.

Granted, there are some situational advantages to this over Lucky Find. First, this is a Connection. This makes it interesting for Iain's Connections, as well as tutorable with Hostage. Second, a Runner like Nasir might prefer not getting a lump sum of credits. Finally, Aesop's Pawnshop is a card.

I slotted this in a Null deck that I brought to a recent store champ. I was looking for more non-event econ to synergize with Street Peddler. It felt good, but I thought more about the slots I was spending on it.

But it's unique. So from a deckbuilding perspective, you need to consider how much money you're getting for each copy, not just for each card.

In this example, I was really getting ~5/copy, which is what you get from Daily Casts. I think it was a fine include for my deck - roughly as good as have an extra 2 DCs.

However, if I had less draw in my deck and saw it a few turns later, I may have only been getting ~8 from it, which is 4/copy. That's like 2 extra Sure Gambles, but they drip out the money inconsistently instead of getting it all at once, so they're definitely not as good.

If I didn't have that much draw in my deck, maybe I would have wanted to include 3 copies. That's ~10 over 3 copies, which brings us down to ~3/slot. Now it's in the range of non-burst Easy Mark, which is not worth it.

All of this assumes best-case money-making. In the games where it's not installed until 4 or 6 pts are on the board, you're making considerably less money.

Overall, it needs notable synergy to be worth it, with either Peddlers, Paige Piper, or maybe OCAs. What a shame! I would have liked to have seen it been 2 and not unique.

(Daedalus Complex era)
PureFlight 1029
it can synergise with agenda forfeiting things like the Data Dealer. This way more points can be stolen and more money can be gained. Might work pretty well in a "steal and sell every agenda" deck. — Shieldwall 25 Feb 2017
Not that you want them to get rolling, but this also applies to the many Weyland "Forfeit the Agenda" tricks. — Goldstep 25 Feb 2017
Absolute tits in Iain Stirling deck, I'd like to add. — H0tl1ne 25 Feb 2017
3

I used to think this card wasn't very good. Used to. Then I tried it out, taking care to put it in a deck with some support from Paige Piper. Its obvious drawback is that it has to be played early, warranting several copies, while at the same time being unique. And boy, did it shine, in some ways that I definitely didn't predict it would.

Fetal AI suddenly became free for the taking (as long as you have at least 2 in your pool). NAPD Contract was still not free, but a net charge of 2 is a lot less than 4. Predictive Algorithm got you down? Human First has your back. Basically, it counters exactly what the corp is trying to do—score agendas. How? To score agendas, they want to keep the runner poor, and this gives them a boost right when they score.

Then there's the flip side. You make a run—it costs you a lot of creds, but you finally got that Priority Requisition—only to realize you're now broke. Human First doesn't let that happen. Things get especially scary considering this is in Anarch, with some excellent multiple access tools that, barring a match against Haarpsichord Studios, lets you not only steal a bunch of agendas, but also keep up the momentum with credit rain that can rival Desperado. Did someone say Demolition Run?

That said, I have to disagree with tiedyedvortex, as I think this is probably not going to see use outside of Anarch. The faction for several copies of it is steep, and there's almost always other things you'd like to drop your faction on. Even in Anarch, it can be tough to fit in a deck without Paige, unless you're playing MaxX. But if you've got a spot for it, it's a lovely surprise to the corp, and it often nets you credits right at the most critical points.

(The Universe of Tomorrow era)
Pikeman 267
This is a great review because it highlights *when* you get the creds and why that's relevant. I'd also like to point out that Hostage can help find HF and/or Paige early. I'm dangerously close to trying an Anarch Connections deck - possibly in Valencia - with Paige, Human First, Tallie, Flint, and maybe Josh B. — PureFlight 12 Mar 2016
0

Not that attractive by itself. Very unstable. Very slow. And unique?!! Hmm.... It seems like we can't see this in play other than Anarch...

Though, I can imagine a very weird Iain deck archetype using this card.

The basic idea of this deck is to sell all the agendas that you stole to the Dealer!

By this way, you can keep pressure to the corp after big-remote-run. And gain 2 with Iain's ability...And...

You can use this card's ability to the limit. (Academically even 20+a creds! wow!)

If this card wasn't unique, I would even think about adding 3 data dealer to anarch and run it! For anarch, it's such a shame that this card isn't unique, but Iain won't care much since he'll just tutor this by Hostage.