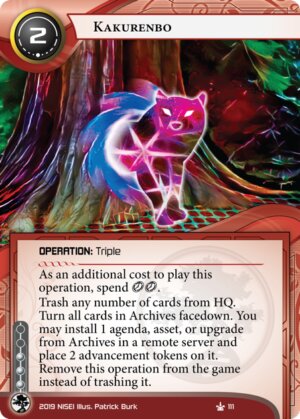 Trash any number of cards from HQ. Turn all cards in Archives facedown. You may install 1 agenda, asset, or upgrade from Archives in the root of a remote server and place 2 advancement counters on it.

Illustrated by Patrick Burk
Decklists with this card

Kakurenbo is a strange card that's somewhat looking for a home.

At its heart, Kakurenbo is a card that installs and advances things. Those are both basic actions; normally, if a card's effect can be replicated with basic actions, the card is designed to do that more efficiently. For example:

In all those cases, we have savings. Normally there's a saving of a couple of credits, but more notably, every single one of those cards has a click saving. And when it comes to installing and advancing, a click saving is really powerful, because it lets you get more counters on a card before the Runner sees it.

Many of the above-listed cards have drawbacks preventing you from unconditionally using them to immediately score an agenda; it doesn't take much Netrunner knowledge to see why "IAAA, score" is a powerful play that fundamentally changes the game when it's possible. But even if you don't have the ability to do that with an agenda, many other advanceable assets also care about being able to advance them highly before the Runner sees them, especially in Jinteki (which is why, when fast-install cards have the "cannot score or rez" drawbacks, they generally come in red). If you IAA a Project Junebug, then a Runner will be set back somewhat if they decide to check it, but it won't be all that hard a blow; they were prepared for potentially taking 4 net damage, their hand size is likely larger than that, it won't take long to draw back up. And if you use only basic actions, an IAA is the fastest you can charge your Junebug up. Mushin No Shin would let you IAAAA your Junebug before giving the Runner an opportunity to check; surviving a check on that with only basic actions would be "draw, draw, draw, run" and leave the Runner with no cards in hand going into the Corp's turn, something that a Jinteki deck shouldn't have much trouble taking advantage of.

So after seeing the sort of cards that Kakurenbo has to compete with, we can look at its numbers and get very confused:

This isn't a Mushin No Shin. It isn't a fast-advance-for-assets. It doesn't do anything any faster than you could do it normally!

As such, any possible use of Kakurenbo has to think about "why am I using Kakurenbo, and not just manually IAAing the same target?". The whole "shuffle around cards in Archives to hide what you're doing" effect doesn't actually help when installing a card from hand, because if you directly install a card, the Runner still normally doesn't know what it is (unless they happen to know everything in HQ already, e.g. because they knew last turn and also saw the top card of R&D). So there are only a few differences between the operation and the basic action that might potentially make it usable:

So in conclusion, Kakurenbo is not really a Mushin No Shin or Dedication Ceremony at all. Taking account everything it actually does, it is in effect a weird sort of Restore equivalent that also lets you score 3/x agendas from hand if you happen to have a Jeeves Model Bioroids installed already, and might potentially have some small amount of shell-game usage if Archives happens to be heavily iced. It's clear how the ability to fast-advance might be useful in a deck (and in fact, the only use I've managed to make of Kakurenbo is the Jeeves combo in a fast-advance deck). Its other abilities are somewhat all over the place and don't seem all that helpful, but perhaps they'll be useful to some future deck (the requirement for an iced Archives immediately makes me think of a Jinteki: Replicating Perfection shell-game deck that wants to reuse Ronin and Project Junebug, which might be viable but probably isn't the best Replicating Perfection build).

This is a really fantastic review that covers almost everything you would want to know about Kakurenbo. Great stuff!

Pretty cool review! I only have to add that the only other spice (apart from cyberdex) that you can get in the archives is... news team by now.

On of the topics that Nisei is covering (as fantasy flight did before) is doing retakes of key existing cards (always with a twist) so they can rotate at some point.

You had Account Siphon that were converted into Diversion of Funds. You have Cloak that became Mantle, Clone Chip that now you can say that's a Simulchip. (But Jackson Howard will live always in our hearts)

In this case the card that you this cards compares to it's a jinteki special one, Mushin No Shin. That card was ensuring that if you play that, you're using another game that's not you're tipycal glacier. And it went over of that jinteki those days could be very poor.

Nowadays there are several things that make our old friend Mushin No Shin. Mainly one of those cards that gived also much appeal to buff assets in servers: NGO Front. One of the reasonable drawbacks of Mushin No Shin it's that it prevented fast advance. You were not allowed to score that agenda for 0 credits without allowing the runner to go for that (with 0 or 1 ice in front) but you could not also rez if it's an NGO.

This card takes a different approach, so let's take the differences:

An the (important similarities)

In overall I think it's a good card with enough difference to live with Mushin no shin.