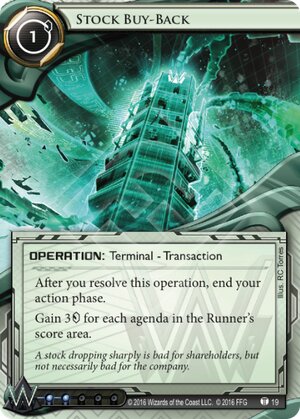 Gain 3credit for each agenda in the Runner's score area.

A stock dropping sharply is bad for shareholders, but not neccessarily bad for the company.
Illustrated by RC Torres
Decklists with this card

I like it on paper. In practice, it's tricky to use.

The slice of the color pie includes having benefits for small agendas. It has since the beginning: see Archer. Archer gets significantly worse if you're pitching 2- or 3-pt agendas. We see that mechanic again in cards like Corporate Town, and fuel for agenda-forfeiting in things like Public Support.

The inherent drawbacks of having lots of small agendas are:

There are probably not a lot of great ways to offset #1. The Board was designed to help with that, but trashing it gives the runner an extra 2 pts and can pretty much lose the game for you.

Let's say your HB deck has a total of 9 agendas: seven 2pt and two 3pt agendas. To score, say, 2 ABTs and 1 GFI, you will spend 11 advancing those agendas.

In a PE deck, you might have 14 agendas: eight 1-pt agendas and six 2-pt, for example. If you were to score out (you should try, if only to pressure the runner), it might look like 3x House of Knives, 1x Chronos Project, 1x Clone Retirement, and 1x Philotic Entanglement. That's 17 (Yes, there could be other agendas like Fetals and Medicals involved, but I think this example still illustrates my point).

In practice, SBB is hard to use because the runner needs to have stolen some points to be worthwhile. You don't want to see it in your opening hand. What if you see 2 of them early? Do you just leave out some agendas for them to steal so your Stocks rise? It feels like a Diversified Portfolio or Peak Efficiency in that it's worse than Hedge Fund early and better than it later. So I think SBB is actually pretty specialized.

I would try this in an Argus rush deck with at least ~14 agendas and 3 Snare!s. Don't ice up R&D early while you focus on scoring out some points, and the 2-3 agendas they steal in the meantime will actually boost your net worth. Then you sell your stocks and use that money to Midseasons them before blowing their shit up.

(23 Seconds era)
PureFlight 1047
I've tried this with a load of 1-pointers with Argus and The Board. You can safely bin them and the use this to feed punitive if the runner grabs them. Lovely if it works but hard to pull off. — Mattsetback 4 Aug 2016
Great review. just one comment about The Board: it gives 2 points to the runner if trashed WHILE BEING ACCESSED. so there are a couple of possible - yet risky - loopholes. — Him 4 Aug 2016
Just remember, you can't do this and Midseasons the same turn, since this is a terminal operation. — EnderA 4 Aug 2016
this can single-handedly fuel the right deck. a PE deck with News teams and Project kusinagi's cluttering up the runner's score area can let you cash in for 15 if your not trying to score out. — thedragon412 2 Jan 2017
It's nuts in PE. I grabbed over 20 with it once. — quailman2101 24 Jan 2017
2

--Very playable in Thule/Sportsmetal and PE. HB has Nightmare Archives and cards like Djupstad Grid and Big Deal which you might slot in rich builds. PE is cash-poor and can win long games. It has many cards that can convert cash into damage (Anemone, Snare, Reaper Function) or into economic drain ($8+ ice) or into forcing runs that the runner cannot afford yet (Dr. Keeling).

--Runners currently don't have any cards that can get rid of negative-point agendas. (Data Dealer and Art Colony have rotated).

--It's less useful in Weyland which has efficient and fast cards but generally not great cards or ID support for winning a long game.

--Most corps can recur ~4-6 cards depending on how many Spin Doctors they find. This is a much better target for recursion than most economic cards. A 4th copy of Hedge Fund only adds $2-3 to your deck's economic potential. An additional copy of Stock Buyback will probably add $8-10.

--It's a terminal, which makes it harder to combo with Hard-Hitting News but otherwise is not too awkward. Most of the decks that need this card do not need a huge spike to do something this turn but rather need a huge amount of money floating around.

--The art is beautiful. The most obvious approach to this card would have been more boring (a bunch of investors hashing out a business deal).

--"A stock dropping sharply is bad for shareholders, but not necessarily bad for the company." Unless the company is secretly shorting itself, no. Keep in mind your shareholders didn't become The Board by NOT setting people on fire that tried to rob them.