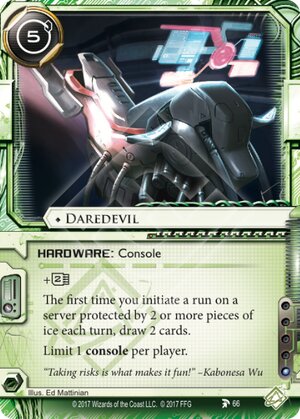 The first time you initiate a run on a server protected by 2 or more pieces of ice each turn, draw 2 cards.

"Taking risks is what makes it fun!" -Kabonesa Wu
Illustrated by Ed Mattinian
Decklists with this card

If you've maybe been a little behind on some competitive circles, you may not have heard that Daredevil is a good card. One comparison would be Patron: but where the baby elephants are at their best against decks with lots of servers (horizontal decks), Daredevil is better against decks with lots of ice (vertical decks). And if you just thought of Daredevil like that, you'd think that it was a decent card, excellent in some match-ups but not all.

But actually wait. How likely is it that your opponent gets one server with two ice on it? How about two double iced servers? Well, if the corp is trying to build a single iced remote server, they usually need between 15 and 18 ice. That's about one piece of ice for every 3 cards, which incidentally why cards like Patron and and Security Testing are so good in the early game: In their opening hand they're likely to only be able to defend two servers, giving you free successful runs for those effects. By turn 3 the corp can usually expect to be able to close that exploit, and by turn 6 start setting up a remote (which itself explains why early aggression is so good against these slower decks, since they have difficulty defending themselves.) Beyond around turn 9 or 10, any ice that they install will almost certainly be on an already iced server. If we can find Daredevil by this point, then we can start drawing two cards on every run.

Well, common advice is that the runner should probably try to draw a card every turn to give them more options, and in which case, great! 3x Daredevil gives you a greater than 50-50 chance by your 5th turn. In fact, since we really only need it by the 10th turn, even 2x copies of Daredevil gives you a better than 50% chance of drawing it just in time. Well that's neat. A console that is better in the later game is better when you get it later. Surprise surprise. But, if you were me there's something that hasn't really sunk in yet: On average, by the time you draw Daredevil, the conditions required to satisfy it's requirements have already been met. In other words, it reads: "The first time you initiate a run on R&D, HQ, or the scoring remote server, draw two cards." So alright, if that's what this card is when it comes down to it, how does that actually compare to other consoles?

In fact it turns out that Daredevil is INSANE. For starters, if the outermost piece of ice just has "end the run" on it or words to that effect, you can "bounce" off of it to save a click on drawing every single turn. For many decks, that's like having a Laguna Velasco District installed alongside whatever other benefits Daredevil provides. If you have Snitch installed (at least until rotation), EVERY ice is just as bouncy, and Daredevil combos nicely with The Turning Wheel and Au Revoir. Reminder that that 1 influence and +2 mem really ties that set up together even out of faction.

But maybe you're not just clicking for cards, maybe you actually want to save another click by taking two cards and a run into a server that you actually want to access. Maybe you have Temüjin Contract, Datasucker, and Atman to reward successful runs and to make getting in that much cheaper. Maybe you're running Net Mercur. Previously your only Shaper console that rewarded making runs was, what, Mirror? But don't forget you draw at the beginning of the run - before you even encounter the first ice - allowing you to use Dean Lister or Faust to get into the server more easily.

Alright, alright you say, Daredevil is good. But I have other consoles that get me money or cards, both in Shaper and elsewhere. But in terms of raw power, maximum cards, Daredevil outclasses every single one of them. Ubax might start drawing you earlier, but in games that can go on for 20 turns Ubax might draw you 15 cards to Daredevil's 20. Astrolabe might be cheap and clickless, but even against corps that install lots of remotes it might draw you 10 over the game if you're lucky - and 1 or 2 if you aren't. Oh and Comet + Quality Time? why even bother? And out of faction? There is Obelus, the console that rocked Worlds with it's let's say, 14 draw combo with Hades Shard. But, you know. That's still not 20.

So Daredevil rewards heavier rigs that get into servers efficiently, it rewards destructive rigs that like to burn through a lot of cards (and I don't just mean yours, mind, Knifed, Spooned and Forked are great for keeping the taxing ice off and the server to that perfect two-ice set-up). But even then, even in Criminal, the home of run-based consoles, Daredevil is still incredible. Remember that, broadly speaking, it's easier to get 1 credit than 1 card. Remember also that criminals are terrible at drawing consistently in-faction, and that most out-of-faction draw "solutions" cost more than 1 influence. Daredevil saves more clicks than Doppelgänger, it actually does things unlike Polyhistor, and unless the corp really, really ices up will beat newcomer Māui. And did I mention it gives you +2 Mem? I would even contest that for some decks it beats Desperado.

Guys. This card is the new Şifr, and it already shares a number of aspects (+2 mem, 1 influence: a combo that honestly would make any console playable on it's own). I would predict that we're likely to see have similar effects on the corp side - since lists that run very few ice (less than 10) are mostly immune to Daredevil's best qualities. And this, this is all from a runner we haven't even seen yet - Kabonesa Wu. She may be looking to take risks, but Daredevil is definitely a safe pick for best runner card of the set.

(Blood and Water era)
RubbishyUsername 436
One thing I like about Daredevil is that it automatically provides safety on more dangerous runs by giving you two more grip cards to absorb damage. — Silv 24 Jun 2017