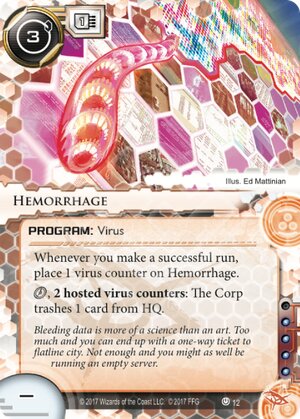 Whenever you make a successful run, place 1 virus counter on Hemorrhage.

Bleeding data is more of a science than an art. Too much and you can end up with a one-way ticket to flatline city. Not enough and you might as well be running an empty server.
Illustrated by Ed Mattinian
Decklists with this card

Hemorrhage or bleeding out profusely is not a condition most people would like to experience, similarly the prospect of bleeding cards out of HQ is a condition most corp players would find distressing as well.

Empty out HQ: Itinerant Protesters along with a successful run on HQ with Legwork (or similarly running with several tokens on Nerve Agent) can potentially win the game, trashing remaining cards out of HQ with tokens from Hemorrhage potentially empties HQ out, representing a significant tempo hit to a corp player who may now be down some agenda points as well.

Run lots: Because of Hemorrhage's ability, the more the runner runs, the more pressure it can put on the corp. Hence Early Bird Public Terminal, Desperado,and other such combos make it easier for the runner to run even more often. Security Testing brings in income, Datasucker, Medium & Nerve Agent pile up the viruses even faster pressuring corp to spend s to purge viruses. Eater is a combo-friendly AI that may helps the runner get into most any server if s are sufficient, meanwhile Hemorrhage continues to charge up. John Masanori can make a run per turn help fill up the runner's grip which in itself allows the runner to run more aggressively. Lamprey takes it to the corp and gives even more pressure to purge viruses (bonus if Fester makes doing so even more costly).

Install & Run Hemorrhage sooner: Djinn in addition to its ability to host Hemorrhage (and still have 2 to spare), it's tutoring ability will allow the runner to get Hemorrhage out of the stack sooner.

ID Synergy: Both Noise: Hacker Extraordinaire & Gabriel Santiago: Consummate Professional are core set ID's that benefit particularly in combo with Hemorrhage, one for filling trashing into Archives the other for providing econ boost when running each turn.

Console Synergy As a virus Hemorrhage combos well with Desperado which provides more credit to run more often, Doppelgänger which provides a free run per turn and Grimoire for the extra virus tokens on install (then combo with Surge to for another 2 tokens, no run needed and now Hemorrhage i ready to fire!), additionally these and many more hardware options offer additional etc.

More Hemorrhage: It's always fun when a program combos with itself, 2-3 installed copies of Hemorrhage increases the threat of trashing cards out of HQ up to 2-3 times per turn! Putting pressure on corp to waste s to draw or better yet s to purge viruses

Run events: There are 27 run events all of which have synergy with Hemorrhage in some way, here are a few notable stand-outs: Dirty Laundry particularly for poor Anarchs, makes that run count for equivalent of Easy Mark in addition to Hemorrhage bonus etc. Account Siphon, Early Bird, Feint, Indexing, The Maker's Eye, Retrieval Run Vamp & Wanton Destruction on and on, each can make significant contributions to the Runner's strategy while simultaneously charging up Hemorrhage. Really of the 27 run events only Recon's ability to jack out represents a weak synergy with Hemorrhage, but even with Recon it could be argued that they compliment one another.

Swoop into Archives: With Hemorrhage moving cards to archives, Hades Shard could provide a game winning option to bypass ice protecting archives once enough Agendas have been potentially dropped in.

Virus: As a virus Hemorrhage inherrently combos with many other virus-related cards

Pressure on HQ: since Hemorrhage gains virus tokens after any successful run, any unprotected or under-protected server represents a weakness on HQ, regarless of how well HQ itself is protected with ice.

Purge Viruses: since Hemorrhage requires at least two tokens to trash 1 card from HQ some defensive control is in the hands of the corp, particularly painful if the runner has been banking a number of unused virus tokens on Hemorrhage

Time consumption: while adding tokens to Hemorrhage can be done efficiently if the runner is doing so while running for other reasons simultaneously, to actually use virus tokens on Hemorrhage requires a each time which can come at the cost to tempo and furthering other priorities.

Apples & Oranges: putting an agenda into Archives isn't the same as stealing it. There is certainly no guarantee that cards trashed into Archives are indeed agendas, even so, some agendas such as The Future Perfect, NAPD Contract for example are harder to steal, not to mention upgrades such as Ash 2X3ZB9CY & Red Herrings etc. Furthermore if given the chance to use recursion options such as Jackson Howard & Archived Memories etc the corp can undo much of the hard work put into setting up the runners grand scheme of getting agendas out of Archives.

Hemorrhage is certainly at home in a variety of decks, Anarch decks in particular but not exclusively so. There are many synergistic combos available, imagine playing as a Shaper or Criminal ID, with Hemorrhage part of the game-play may actually look like playing Noise: Hacker Extraordinaire due to Hemorrhage sending cards to Archives.