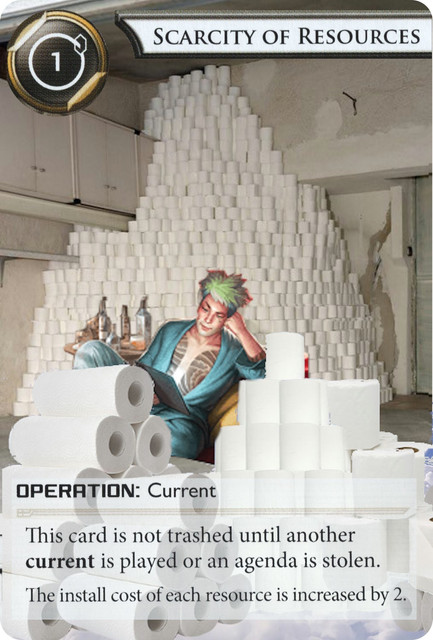 This is the Corp deck I’ve been playing and testing since uprising release. Finished 3rd in an Edmonton GNK, 1st in a Hacktivist online tournament run by @kevintame, and just finished an unbeaten run in @quarkbutter’s online GNK.

I’ve been working on this deck since the release of uprising and I think I’ve tested and played it enough to post it. GameNET makes a lot of ICE so strong and earns you a lot of money and it is definitely an ID to watch in NBN.

What makes this deck so good is the ability to play Scarcity and ICE both HQ and R&D with threatening ICE that can rezzed, all on turn 1. 2x ICE and Scarcity turn 1 happens consistently at least 4/5 games. Most runners will poke centrals if you start with 2x ICE and Scarcity. There are 11 good pieces of ICE in this deck that allows protection of both centrals turn 1 with 4 credits after playing Scarcity. These are 2x Afshar, 3x Turnpike, 3x News Hound, and 3x Slot Machine. Turnpike + Gold Farmer would work as well if the runner runs the server with Turnpike first. This is often a game-winning tempo hit, and with only 9 agendas with 2 being Bellona, the runner usually fails to find an agenda early.

GameNET’s ability lets you play a glacier style game that no other ID has let you do before. You can jam agendas safely in your remote with 2 unrezzed ICE and only 6-8 credits. The deck currently doesn’t have a restricted card either. It used to play GFI but Bellona synergizes nicely with the whole game plan and is busted with NAPD Cordon. The agenda suite works so well together and amazingly well with NAPD Cordon. 4/2s like Remastered Edition and Cyberdex Sandbox work well with Cordon but Remastered especially because, with a Remastered scored, you can do things like play Cordon and install single advance a Bellona making it 11 credits for the runner to steal. Audacity does the same thing and is the best bit of spice in this deck, allowing you to finish off games by fast-advancing a Beale or by never-advancing a Bellona if you also have a Remastered scored.

One note I’ll make is that Endless EULA is not good, despite the dreams of it gaining you 6 credits. This should definitely be switched for a 3rd Rashida.

This deck is so much fun! Scarcity shuts down a lot of resource-based runners like Geist and Hoshiko and it works so well in this deck. I’d love to hear some thoughts and comments!