How To Build A Runner Deck - Akiko Nisei

Hi all! I've been thinking for awhile about doing an article about how I build decks. Much has been written about how to play netrunner, but I very rarely see anything about how to construct a playable list. I see way more often "Just netdeck until you've been playing for a long time, then try and build," which while good for some players, others will find deeply unsatisfying. So I've detailed the methodology I use here, the goal of which is not to produce the best deck in standard, but to produce the best version of the idea I started with.

Step 1: Come up with an Idea

So obviously, if I'm going to build a deck, I need to start somewhere. For this example, there was a discussion on the local discord about how to build a functional deck for Akiko Nisei: Head Case, which most players agreed they had never seen used in a game. After a bit of discussion, we concluded the deck should:

At this point I want to define what cards are essential to making the idea into a deck. If I end up cutting these cards, I usually scrap the idea, as I'm now probably iterating towards an existing standard deck list. In most cases this shouldn't contain more than about 10 cards. For this list, the essential cards are:

So I end up with: 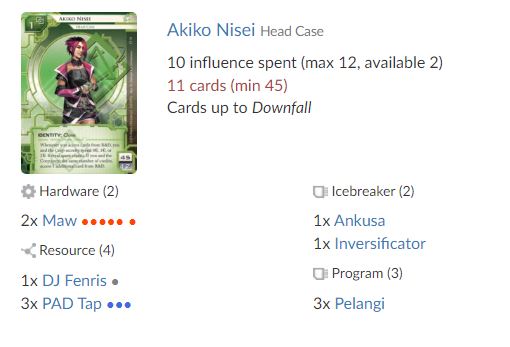 Here I'll add the cards necessary to make our deck function, such as tutors, recursion and essential tech cards. The goal here should again be to add no more than 10 cards or so, for ~20 total cards in deck. In this case, I'm pretty program reliant, so I'll add SMC, and Simulchip plays nicely with the Pelangi I'm already using. I'll also add Misdirection and Clot, because every shaper deck should probably be bringing those without a compelling reason not to. I'll also add Ika, as the deck should have some kind of killer. 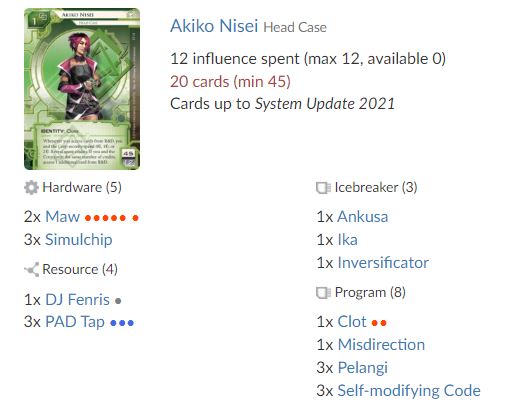 This is the place many deck lists come to die. If the card count is much above 20, I can be pretty sure that I won't have enough econ for the deck to work, and I scrap the idea. There's no shame in letting go of an idea that just doesn't work. Even if I do, as I did here, make the target number, I still try to really look and see if I can plausibly cut anything I've put in. In this case, I think 3 Pelangi + 3 Simulchip is probably overkill, so I cut a Pelangi for five total. Additionally, depending on how the draw situation turns out I could plausibly get by with only two SMCs, so I cut one of them for now, and end up with this: 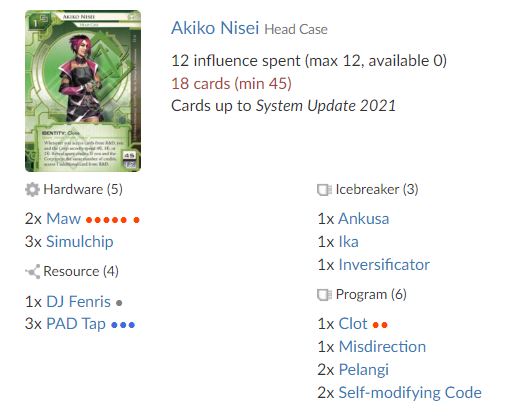 At this point, my goal is stuff as many econ cards as possible in the remaining ~25 slots. Keep adding econ until you run out of slots or run out of playable econ cards. So I'll add the staple neutral and faction econ first: Sure Gamble, Daily Casts, Creative Commission, Dirty Laundry, Overclock, Diesel, Beth Kilrain-Chang. With Maw I should have the MU for the full three Rezeki, so I can add that as well. I need some draw beyond Diesel, so even though its a pretty mediocre card, I'll add two copies of VRcation. 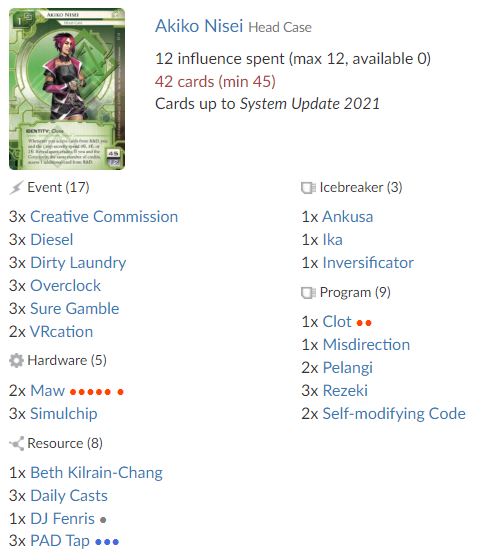 If at this point, your deck list is full, congratulations, you can skip ahead. If you somehow still have a few slots left, fill them with one of these these things:

In this case, I'm going to add two bad econ cards (2x Telework) and a Non-Required Tech (Citadel), but any of the above options are defensible. So now I have a first draft list: 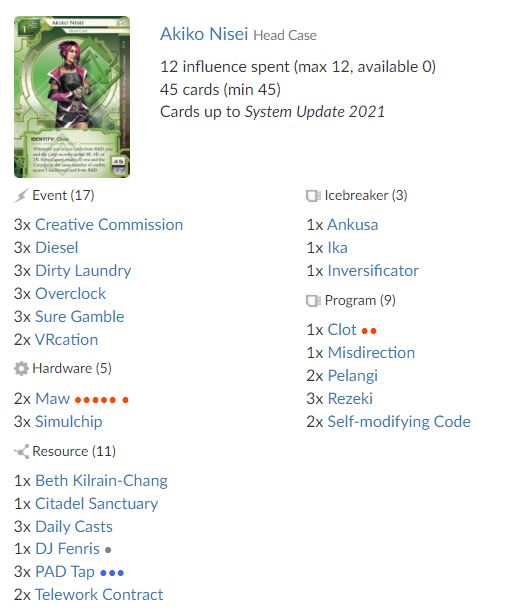 Go play some games with your deck. At this point, while it would be nice to see the deck win some games, what I really want to do is evaluate whether the list is doing the thing I set out to do in Step 1. A lot of times this methodology will lead to a list that's technically functional because its got 35 cards of a functionally sound netrunner deck and the ten cards from step 2 that don't do anything. If that's the case, generally I'll scrap the list. Similarly, but more rarely, I'll end up with a deck that just doesn't function, and scrap those too (the construction method is designed to preclude this possibility, but sometimes it happens, especially if I let myself cheat the limits in Steps 2 and 3 too much). But if it does the thing, then I can move on to Step 8.

At this point I consider whether the deck needs any changes or improvements. Did I find a bad matchup that required additional tech cards or maybe some of the cards I cut as non essential turned out to be. In this case I ended up really wanting that third SMC in a lot of games, so I put it back in. Additionally, I found that I'd really like to have 2x Political Operative to help deal with upgrades, so I made the tough decision to cut Clot in its favor, though I think both options are defensible given Akiko's limited influence. I cut the two telework contracts to make room for these changes, arriving at the final list shown. From this point, I return to step 7 and continue to iterate until I decide to scrap the list or I'm happy with it.

Well there it is. I hope some of you found that helpful, and also enjoy this Akiko deck, which I've had a pretty good time with. Until next time.