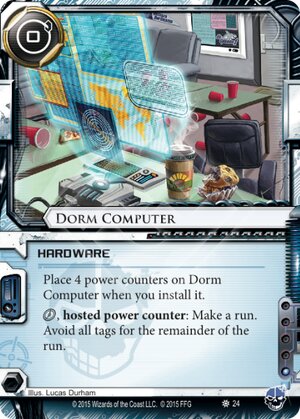 Place 4 power counters on Dorm Computer when you install it.

click, hosted power counter: Make a run. Avoid all tags for the remainder of the run.

Illustrated by Lucas Durham
Decklists with this card

Laughs at Data Raven, which is especially helpful post Data as Destiny and Keegan Lane is going to be causing headaches. So is Quantum Predictive Model behind something like a 6 strength Gutenberg on R&D. Casting Call never took off, but it also ends those shenanigans.

Also lets you keeps the pain away from News Team, totally turning it off, providing you manage to hit it with one of the 4 runs (low odds).

Of course you can only run 4 times with this, and you have to click it to run, so it doesn't work with The Maker's Eye or Legwork runs, something that New Angeles City Hall would be better for, and that card also works outside of a run, which also lets you avoid 24/7 News Cycle into Breaking News. Dorm computer doesn't stop SEA Source or Midseason Replacements either which is huge.

Minor pros are that it lets you avoid Enhanced Login Protocol, and helps against Argus Security: Protection Guaranteed as well, so it's not totally useless out of the NBN matchup.

Extra points for excellent flavour. You're using a dorm computer so it's really hard for the corp to know who you are, but you can't do it too often or they get wise (or you get b& from the dorm). And they were playing beer pong in the background!

I like this card, btw, if that wasn't obvious.

(The Universe of Tomorrow era)
Fentonizer 325
Most infuriating thing is that you just can't combine it with other run cards, which means it's antisynergistic with Criminal's whole schtick, and not many are gonna splash influence for a card unless it's clearly amazing or in their game plan. — RubbishyUsername 28 Oct 2015
Having said that, I had fun running this with Forger and just avoiding as many tags as possible without actually running out of tag removal. — RubbishyUsername 28 Oct 2015
I don't think Bandwidth works with Quantum Predictive Model. The run is successful (and the Bandwidth tag is removed) prior to access. — Jeffrey Bosboom 28 Oct 2015
I used this in an early iteration of my [Sunny Lebeau: Security Specialist](/en/card/09045) deck alongside [John Masanori](/en/card/04009) and [Security Nexus](/en/card/09047), which both can backfire. It was really helping to defend my resource economy against Data Ravens and other NBN shinannigans. I ditched it at some point, because Sunny isn't really the one who needs this. But the card did a good job. — Krams 28 Oct 2015
Another minor pro: it's a valid victim for power shutdown that keeps sitting around once the counters are gone. — Slain 29 Oct 2015

Fun fact: can´t help you against funhouse (prob in eternal) as taking the tag is a cost which can´t be prevented (also rip Jesminder)

Dorm Computer has a few uses :

You may want to play a single copy if your meta plays RP with ELP and Buchershops.

By the way, I'm not sure if you can avoid taking a tag with this when stealing an agenda to Argus. Can somebody confirm that?

(Chrome City era)
Bananifier 378
As Dedicated Response Team works on TGTBT and Snare!, this would work against Argus, since you steal the Agenda during the run — ミドリン 1 Jul 2015
Is that still considered part of the run, though? You first successfully complete the run, then you access cards, and then you steal them. I think the run is over before that point.uccessfully completed the run in — KitsuAeryn 1 Jul 2015
... ignore everything after "that point". Very strange series of repeated text. Sorry! — KitsuAeryn 1 Jul 2015
The run is considered successful at 4.2 and cards are accessed/stolen at 4.3, but the run doesn't officially end until all cards are accessed/stolen, which is at 6. I would say that this prevents the Argus tag. — Sabin76 2 Jul 2015
I think it won't. Because you chose to take the tag or the meat damages. Preventing the tag would behave like preventing tags you get thorugh Snatch & Grab. On a sided note, I'm pretty sure the run is still on when you steal agendas, that's why you can use bad publicity to trash assets for example. — Nex 2 Jul 2015
You avoid a tag, don't prevent it, so it works. In the same way tha Forger or Qiaju works for Joshua B's tag and so. But you can't prevent meat damage with Plascrete since you are not DEALT dammage, but the wording is not the same for damage and tags/bad pubs :) — ミドリン 3 Jul 2015

I think it would work because it´s "either suffer 2 meat damage or take 1 tag", therefore the tag isn´t a cost so it can be avoided

Thanks for the information about Dorm Computer of this I am happy with this that's why I am here sometimes I have an 0xe8000015) issue and find the support was not found and its more important knowledge about how to get the situation of this.

(NAPD Multiplayer era)
mejarkonsaj 1
Now I found this blog to reveal my query https://www.applemacsupportnumbers.com/blog/fix-itunes-error-0xe8000015/ — mejarkonsaj 31 Oct 2018
i went through this post and i find that it quite interesting. i found printer error and https://www.canonprintersupportnumbers.com/blog/fix-canon-printer-error-state-windows-10/ this solved my issues. — Floridawilson 2 Nov 2018
Everyone better bust out your 'Guard' because these 'Spear Phishing' attempts are making a run on the Netrunnerdb asset. — BlackCherries 2 Nov 2018
You can download printer drivers from any official site. If you are working on Windows 10 then no need to download from external sources. For any printer related issues visit https://www.printererrorrepair.com/blog/how-to-fix-epson-printer-error-code-0xf1/ — eudydhe 5 Nov 2018

Now we have to use Swordsman to find out whether eudydhe and Floridawilson are AIs or just Trolls. Mejarkonsaj is definitely an AI tho so we should block his IP twice and then shoot a rocket in their face