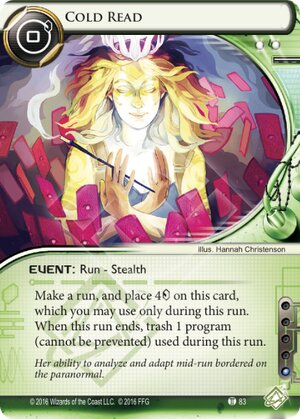 Place 4credit on this event, then run any server. You can spend hosted credits during that run. When that run ends, trash 1 installed program you used during that run. Trashing a program this way cannot be prevented.

Her ability to analyze and adapt mid-run bordered on the paranormal.
Illustrated by Hannah Christenson
Decklists with this card

This is a pretty good card, if it is used correctly. It is quite similar to Stimhack. Cold Read doesn't provide as much money, less than half actually, and the downside or penalty for the money is potentially worse. However, that penalty can be avoided or at least mitigated unlike Stimhack.

So if used correctly, this is potentially a zero cost Sure Gamble that also lets you make a run! Here are some good ways to use it:

1: Make a run without using any programs. Of course you need to use the money too.

-Host programs and hardware on Personal Workshop and run at a naked server or simple barrier. Other options are Self-modifying Code, Artist Colony and Clone Chip.

-A less common use would be to steal an unprotected NAPD Contract, Fetal AI, or any other agenda with Predictive Algorithm in play.

2: Use programs, but ones that are trashed on use or that are almost out of counters. This would include the breaking and entering suite, the friendly puppy dogs, and others like Overmind.

EDIT: Drugs mentioned another good set of breakers, the Birdies. You can't trash it if it is no longer installed. I think this would be a great card to include in a Birdie deck as the derez effect gets really expensive really quickly.

Now there are some other good things to consider. It is a run event, so Ken "Express" Tenma: Disappeared Clone is a fan of this card. It will avoid the tax from Enhanced Login Protocol. And it can be combined with other run effects like Desperado and Temüjin Contract.

A word of caution though: I'm pretty sure that cards such as Medium and Datasucker will be "used" if their trigger condition is met. So be aware of that in your deck building.

All in all, a solid card in the right deck and an easy include at one influence.

(Martial Law era)
quailman2101 277
And there's that one little detail you didn't evven mention: It's a __Stealth__ Event. Well, yes, you can work around the penalty. But if you don't and you simply use it for a hail-mary run you not only get 4 creds, but those also count as stealth creds. — Krams 11 Dec 2016
Honestly, the trash is almost an upside for Lady since you can then Clone Chip her to restore her counters. (Even if the MWL does hate you for it...) — LordRandomness 11 Dec 2016
Indeed it is stealth, I forgot to mention that detail. And it does have a bit of a surprise factor (like Stimhack) especially if you are running stealth. Honestly though, with Net Mercur out, it is almost impossible to make the runner run out of stealth credits, unless you can trash it. — quailman2101 12 Dec 2016
Just for clarification, assume I played this to run with a SMC out. If I use SMC to tutor for one of my breakers with the Cold Read creds, does trashing SMC qualify for the unavoidable program trash at the end of the run? — cygnals 20 Dec 2016
I think it would count as a program used during this run, however, you still have to trash a program used during that run if you can, so if you used another breaker program during that run, you would have to trash that one because you are able to satisfy the condition. — asianavatar 20 Dec 2016
I'm surprised and disappointed you didn't mention Khan's breakers: Golden, Saker, & Peregrine. Amazing synergy with them since you can return them to avoid Cold Read's trashing effect and get their derez effect on the corp's ice. — Drugs 9 Jan 2017
@Drugs Good point, I didn't think of that. — quailman2101 12 Jan 2017
Would also add the conspiracy breakers are good with this as they dont mind being trashed. — lunchmoney 22 Mar 2017
Also works very well in "glory runs" — .wil 22 Mar 2017
Also worth mentioning that the 4c live on Cold Read rather than your credit pool (where Stimhack is), which is very important for Nasir and, um, Universal Connectivity Fee. — PTD 16 Jul 2017
Hi, have a Q, let's say if I'm doing a run and I've my stealth breakers and Paperclip installed and I use Cold Read, if there are no barriers installed, can I just power up Paperclip with 1 credit regardless and allow it to be trashed, fulfilling Cold Read's penalty? — supercatfish 27 Aug 2017
yes you can just pump Paperclip — Sutlomatsch 20 Feb 2018