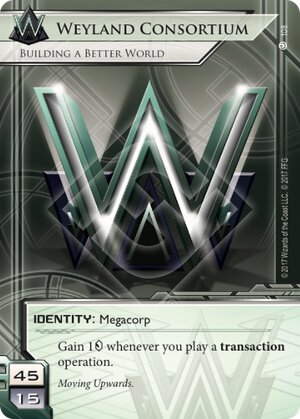 Whenever you play a transaction operation, gain 1credit.

Moving Upwards.
Decklists with this card

(The Valley era)
tiedyedvortex 4729
Sorry, as much as I love BaBW, OAI'd Curtain Wall in Blue Sun is more money than Restructure in BaBW — Kroen 12 Apr 2015
Actually, the difference between OAI Curtain Wall in Blue Sun and Restructure in BABW is not as wide as you think. OAI Curtain Wall takes 2 clicks (install, oversight) and 2 cards for a conditional (i.e. ice not broken, shutdown etc.) 6.5 credits per click. Restructure in BABW is an unconditional 6 credits per click, although with the downside that you need to start from 10 credits. — Phoenix 12 Apr 2015
Green and Blue level clearance are a must in BABW, IMO. The ID needs to keep drawing into transactions. The one edge it has over ETF is that its ability can trigger more than once per turn. Unfortunately that's a pretty big influence hit. Still though, BABW was my first Weyland love and it's always my go-to for trying out in-faction ideas. — lolpaca 13 Apr 2015
As I understand it, Blue Sun wouldn't give you more money back than the actual install cost. So just because an ice is 10 credits to raise, if you were to put it back in hand you'd make nothing. This may or may not be true but I tried to stack Blue Sun with Breaker Bay Grid and was told I wouldn't net the 5 credits Breaker Bay saves in rezz cost. — bdistracted 23 Jun 2015
2

EDIT: BABW has been reprinted in System Gateway! In standard Beanstalk Royalties is now replaced by Predictive Planogram, and Restructure returns in the form of Government Subsidy. The Planogram costs an influence which hurts a bit but the flexibility it provides is more than worth the new inf cost. In addition we have Hansei Review which is quite nice, though in standard this means one loses Blue Level Clearance and as of the time of this writing Violet Level Clearance is now banned. Unfortunate, but luckily for us we're still Too Big to Fail