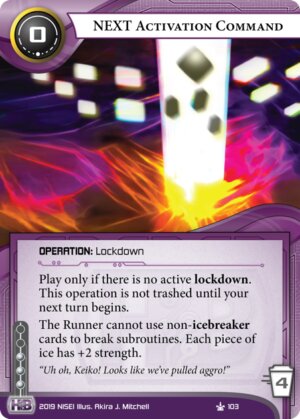 Play only if there is no active lockdown. This operation is not trashed until your next turn begins.

The Runner cannot use non-icebreaker cards to break subroutines. Each piece of ice has +2 strength.

Pretty weird, that this card has no bioroid flavour as that seems the primary role for this card (shout out to any NEXT players out there tho keeping the flame alive!). For me this card is a huge flavour win otherwise as it is exactly what i pictured when i first heard the lockdown mechanic. The puny bioroids you were clicking through before suddenly turn ROIDED (I'm sorry).

As to its usefullness i think HB can profit from this card plenty. Sportsmetal can get a nice scoring window and the Fully operational archetype with multiple one ICE servers benefits as well (Just watch out for Inside Jobs/Spear Phishing!). The aspect of telegraphing a score isn't as much of an issue with HB in my opinion. Hell, you can probably goad the runner into somme value runs with your Architects of Tomorrow deck! Excellent card: Bioroid/10

I have high hopes for this card. At the time of writing this review, we're living in a world where ice is trivialized by a ridiculous assortment of cards, be they icebreaker or otherwise. It's harder than ever to be a glacier deck; decks that used to epitomize the vegan corp lifestyle are having to explore other methods, and I think that's a shame. Which is, once again, why I have such high hopes for this card.

Well even if this card doesn't stop every single tool, it does stop the most egregious one, D4vid, and a few others too. It also reinforces every single ice by +2 strength for the very affordable cost of 0 credits, a value that only gets better the more ice you've got on the playing field. It does have a weakness, which is the fact that it can be trashed, but that's more than easily dealt with. It's not a small trash cost by any stretch, and unless the runner's running HQ every turn, they're not gonna snipe all of them, right? Here's hoping.

All in all, what I hope will be one more fun little tool, useful for ice heavy corps to shore up defenses with.

The review from Gerrark mentions a lot of cards that were menaces against ice, but have since rotated out of standard. I'm glad to tell you that three years later, we have a brand new assortment of cards trivializing ice!

The three new big non-icebreaker ice answers are Botulus, Boomerang and Endurance, (Hey, one in each faction!) and this makes all of those very sad as well. In particular, since the boat often relies on banking a large number of counters to threaten a remote, this can give you a late-game scoring window you'd otherwise never have. The boat looks primed to be a serious metagame threat, so having a card which shuts it off for a critical turn can be extremely powerful. In addition, since the addition of powerful upgrade hate like Light the Fire and Pinhole Threading it pays to have a way for glacier to score which isn't dependent on such cards.

The caveat is the same that's always been true for all the lockdowns: you want to use them the turn you're planning to score and it therefore takes up a critical click on the turn you need it most, so unless you're trying to score out a 4/2, you're probably not using the best tool for the job. Scoring a 3/2 is probably easier through a fast-advance plan, and a 5/3 requires additional clicks to score. Thankfully, since you're playing this in HB, you've got the best support card possible: Seamless Launch, which enables you to install-advance a 5/3 and still score it next turn.

The deck that this most neatly slots into - defensive upgrades, HB, Seamless Launch - is the turbo glaciers we've seen out of Precision Design. PD has to make very few changes from the most popular decklists to slot this, and this card could end up being a premium non-tech tech card in the coming metagame.

Weird idea: Could you use Panchatantra to give a Bioroid the subtype Icebreaker, and thus use the Bioroid to break itself through Next Activation Command? It doesn't say "Icebreaker Program".

'Cause that would be awesome. I ship it.

@m.p Check the ruling on Panchatantra, you can only give a subtype that exists for the type of card you're targetting.

These reviews aren't really the places for questions about the cards.