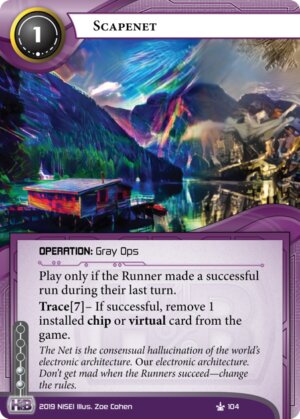 Trace[7]. If successful, remove 1 installed chip or virtual card from the game.

This card cannot be reviewed without looking at its predecessor, Foxfire, a card I always liked but rarely saw any play. Link is a very underused subtype (only present on 6 cards, all of which are now rotated), there were fewer virtual resources and because of the higher power level of the meta, cards like Foxfire suffered from "50th card syndrome". Solid, but not good enough to take up a deck slot. But now it is 2020, rotation has happened and the card pool has changed. Is a similar card worth a slot? Let's compare.

First of, trace 7 is still as solid as ever, probably even more so. Rabbit Hole is gone, and even a runner like Sunny may find this high of a trace non-trivial. This trace will either succeed or drain the runner's credits. The cost of 1 credit vs Foxfire's 0 is slightly worse but negligible. It hits chips instead of link, which there are 20 off, so that's nice. The 'remove from game' ability is neat but often insignificant. Resource and hardware recursion is rare. It does get around Wireless Net Pavilion and Dummy Box. Due to not being neutral, unlikely to be seen out of faction. Very significantly, it requires a successful run to play, which decreases its window of opportunity.

So, let's now go over some nice targets. The most obvious one is Turning Wheel, an omnipresent card that wins games. But due to the aforementioned run condition, a runner who keeps bouncing of your ice will play around Scapenet. Huge bummer. DDoS is another great hit, but the runners who play it are unlikely to make succesful runs before they use it. Double bummer.

What does spark joy is hitting the Net Mercur of an unprepared Smoke player. Logic Bomb is also a nice target, as Adam does like to recur these with Reclaim. Many runners rely on the drip from Data Folding. Cyberdelia is expensive and getting rid of it could put the runner over MU limits. DreamNet is another strong card. Other relevant targets include all companions, No One Home (although Best Defense is better), Caldera (for thousand cut decks?), Ice Carver, Hunting Grounds, Gang Sign, Simulchip, Akamatsu Mem Chip and Prognostic Q-Loop. In eternal you can get rid of Crowdfunding for good.

Are those enough targets to make this card relevant? Maybe. I think Scapenet is a nice card for HB, as they are kinda lacking in good answers for resources. NBN tag you and trash your stuff, Weyland do this too and they have Tithonium. Jinteki has Voter Intimidation and Sadaka. HB now has this. But it probably won't be widely used. For now. Who knows what Nisei might release in future sets.

Edit: forgot to mention the art work. Different, but really vibrant colors. I like it!

Very good review. I like this card quite a bit and think it will prove to be a nice tech card in certain decks. Especially with lots on encounter effects on ICE it may be worth including. Looking at you, NBN!