After a fun but tiring time at Worlds, Steve and Rene were looking forward to their European vacay. They would be visiting Sheffielderby, one of the few remaining habitable (by some definition) outposts in the permafrost of The North.

The cybairbnb was an unusual place; eight bedrooms, all en suite, but without some of the facilities you might expect (such as a table more than four people could sit around). Still, the one luxury they had paid for was present and correct: The TimeMachineTM Hottub.

They were keen to begin their unwinding, so headed to their room to change. "Where did you put my swim shorts?" asked Steve. "In the side pocket, with mine." was the reply. A moment of rummaging later, he emerged looking confused, "Is this a jock strap?!" Rene gave a mischievous smile and took the garment from his hand before leaning in close, whispering breathily in his ear "ball support".

Their attraction for each other was stronger than ever; attraction like a Magnet to Swiftie's Botuluses. They longed to hold each other and let the crisp cleanliness of the Northern air contrast with the heat of the tub. They dashed outside and threw back the lid, only to find the water as cold as Pauly's decision to play Gagarin instead. Please note: Hot tub will take ~24 hours to heat up, said the sign. 24 hours! They couldn't wait that long. They were ready now. They wanted it now. They weren't going to take no for an answer; the fire in their hearts would keep them warm. 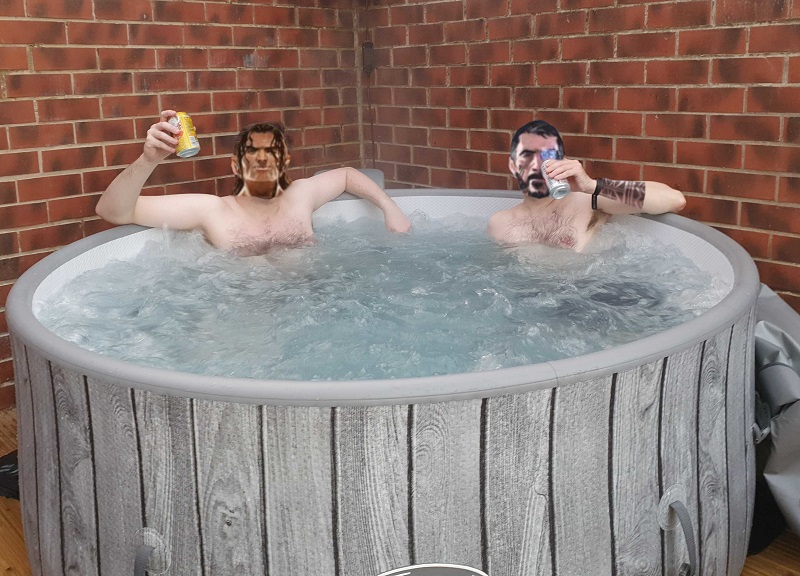 Our initial testing thoughts were that Steve or Hivemind Maxx were the runners to beat, and we had no idea what corp beats both of them. PD felt too fragile to PAD Tap and Mad Dash (we may have been wrong on this). Gagarin felt too draw dependant (and this). Neurospike Azmari seemed too memey (but one out of three ain't bad). As many half-baked ideas were thrown around and dismissed, one voice (loudly and repeatedly) suggested Ganked! and Seamless Launch in Palana. Some time later, we were convinced it was not only good but would probably be a surprise to most people, as the only fleeting mentions of Jinteki across Slack and various podcasts were about multi-recursion grinder versions (like what Swiftie played) or that it was a non-factor.

The gameplan is as simple as can be. Get an Anansi on the remote (with an insulator from Hippo if against Anarch) and then just jam stuff behind it. Between La Costa Grid and Seamless, scoring takes care of itself. And if people try to clear it out they'll hit a Ganked! to fire the Anansi, which at a minimum will be expensive and at best will be murder death kill. Meanwhile you mount the defences on centrals with a mix of moderately taxing ice.

On Day 1A it went really well for two of us, with a collective record of 10-2 (the third player, who shall remain nameless, wished they'd played more Brainstorms). Unfortunately our runners didn't do quite as well so we didn't get to test it out at the top tables, but I'm confident that it's "pretty legit", as the kids might say. Highlights include Ganking an Omar when they tried to avoid a second Anansi on R&D, Ganking a Steve when they Sneakdoor'd to avoid a DNA Tracker on HQ, and double Gank-killing an Adam on the remote after they used both Engolo and MK to break Anansi the first two times. Ganked! is a much better card than I originally gave it credit for.

Huge credit to ExtraC for doing most of the design work on the deck and encouraging us to play it. I'm sure if he'd played he'd be doing the write-up. Credit to Sixtyten for accidentally giving it a more memorable name than Galana. Big thanks to all the #worldsplaza crew and visitors for making Worlds21 a great time.