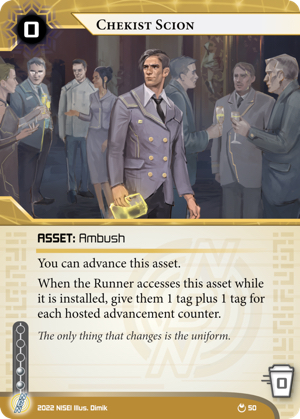 When the Runner accesses this asset while it is installed, give them 1 tag plus 1 tag for each hosted advancement counter.

The only thing that changes is the uniform.
Illustrated by Dimik
Decklists with this card

This review is written from a Startup point of view.

To start talking about Chekist Scion, we should probably start with its predecessor, Ghost Branch. Both are 0-cost, 0 assets that can tag the runner if they access it while installed and it is advanced. There are only two differences: Scion is 2 influence where Ghost Branch was 1, but Scion gives one tag for free in addition to the number of advancement counters.

I compare this change to the change from Project Junebug to Urtica Cipher: it doesn't fundamentally change the desired play pattern of the card, but it might offer some options that wouldn't be possible otherwise. Giving the runner a single tag is rarely a big deal, but getting it at no additional cost is quite nice.

To discuss the card, we should talk about the other cards related to it, the runner cards that can counter this, and what you can do once you've tagged the runner.

The ID in Borealis is Pravdivost Consulting, which has an ability that synergizes quite nicely with this card. Not only can you give a runner two tags at the cost of a card and a to install, the Pravdivost trigger occurs after the runner commits to access so they don't even know it is an advanceable card before they hit it. Alternatively, you could Install Advance Advance this, and when the runner hits it, even assuming they ran first click, taking 4 tags means they won't be able to clear all tags in their turn.

Finally, I'd be remiss if I didn't mention NBN: Reality Plus, the ID from System Gateway. Generally speaking I prefer more repeatable sources of tags in that ID, like Funhouse, but this will trigger the ID ability. The fact that this gives a single tag when not advanced could potentially make for some nice bait games if you're playing Beale or No Beale.

There are actually shockingly few tag removal cards in Startup. As of Midnight Sun there are three: Networking, Flip Switch, and No Free Lunch. Networking doesn't help clearing tags faster, only cheaper, and both Flip Switch and No Free Lunch only help in the sense that they let you pre-spend the click (unless you're using Az McCaffrey: Mechanical Prodigy trickery on that Flip Switch).

None of these cards are seeing wide play, so if the runner gets tagged they'll probably just take the basic action to spend a and 2 to clear the tags. However, they might decide to ignore the tags completely, because...

I wouldn't say that there is no tag punishment, just that very little helps to win the game. In Standard, you have BOOM!, and until very recently you also had High-Profile Target. Startup has no damage operation based on tags. As such, there are some things you can do while the runner is tagged, but it is very hard to leverage tags into a straight-up wincon.

The most straightforward wincon with tags in Psychographics. Give the runner a bunch of tags and fast-advance agendas. Maybe even get that mythical 7-point Project Beale. While it is unlikely to outright win you the game unless the runner racks up an impressive number of tags, even just 2 tags turns it into a fast-advance tool. And as long as Beale is around, there's no real upper limit to the advantage more tags can give you.

So, I had forgotten that there is a way to do damage if the runner is tagged. That is, if you score Orbital Superiority, you can do 4 meat damage. All you have to do is score this 4/2 agenda and then you can maybe hurt the runner. I know people have tried with this and Neurospike and while I'd love to see a deck that makes it work, I don't think it is reliable enough to flatline.

Finally, Backroom Machinations. While by no means even close to Exchange of Information, it is a way to get agenda points with tags. There are decks that run all 2-pointers that force the runner to steal 4 agendas, while they try to score 3 and play a Backroom Machinations to get to 7. I think this is the best use for Chekist Scion in Pravdivost Consulting, though I still have to test that. If the runner doesn't go tag-me Psychographics isn't a reliable wincon, but it will most likely be possible to land a few tags with this card at some point and trade them for a point.

The other major tag-punishment card is Retribution. There are some cards you can baseball bat pretty hard, but the current meta has some pretty strong runner economy and if they are playing Endurance playing rigshooter seems impossible. Blowing up the boat is fun and can set the runner back economically, but unless they've discarded their second copy they can probably afford to install a second boat and keep running you down.

I could talk about Predictive Planogram, but the short version is that it is good but not worth running Chekist Scion for. You don't need to run traps to make your econ better. Trust Operation seems neat, I haven't had a chance to play it yet, I hear people like free Archer though?

So yeah, Chekist Scion. A powerful tag tool at a time where tags feel a bit weak. Looking at this card and Mutually Assured Destruction, I really wonder if we'll see a High-Profile Target replacement in Parhelion. It seems like there should be some kind of "land 3+ tags, win the game" option available, because right now the runner is probably better off not clearing their tags and just trying to win before you can Psychographics to win.