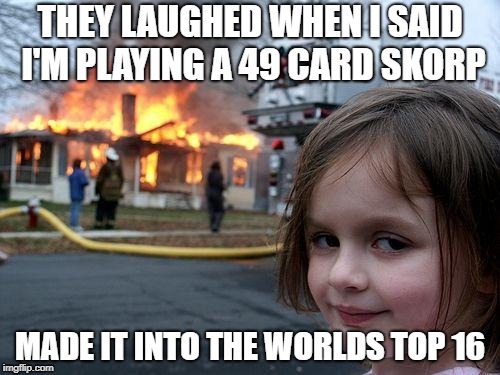 "Stop telling me how to play Netrunner!" - A frantic Spags in cut

"Can you please tell me what this card does?" - A perplexed Dan previous world champ in Cut asking about half my deck.

Magnum Opus! The penultimate official end to all of Netrunner. The centre stage to the best and most devout players to play the most adrenaline pumping and high stakes games known to runners and corps everywhere. Everything is on the line to be the best and only the most structured, consistent and developed decks will reign on top of the meta. So what are you playing Alex? ....49 card Skorp? With SALEMS!?

Ladies and Gentlemen! Sysops and Bioroids! I present to you....the Borrill Effect! Okay I suppose I can talk logically about what the thought process of this deck was. Basically after Nationals I was getting a feeling more and more Maxx players would jump up. Even after the thankful death of the Zero, Clan Vengeance fiasco over the summer. And especially after Hunter Seeker was vanishing practically no one in their right mind would see Skorp as a threat. Welp they were't expecting this guy to think so brilliantly of the idea. Naturally the first problem was how on earth do we make Skorp good? Some intensely tight fast advance deck with the threat of rig removal for support? Pffffft! No how boring. A supermodernism deck with Hard-Hitting News and High-Profile Target? Oh please you insult my intelligence. ....Standard Procedure and Salem's Hospitality going for hand removal? NOW WE'RE TALKING! I tested the deck at a gnk in Reading and after a lovely Toby threw both my ID and Playmat in outrage against such a travesty of a deck I knew then that I was onto a real winner of a deck.

No I'm Not A Monster I Just Want Ibrahim Senpai to Notice Me!

Most of you will remember in the days of Mumbad NBN's theme was sorta hand information. Learning what's in the hand and how to get rid of it with Salem's Hospitality and Ibrahim Salem. The problem was especially was Salem's Hospitality was most of the time you'd have to burn one just to get the other to target a specific card you want to remove. Well in the latest cycle a delightful little card called Standard Procedure came out and suddenly you had a potent combo that not only gave you money (The thinking man's Sweeps Week), but also helped snipe key cards. Ibrahim himself gives you constant pressure to the hand. Allowing cards that would hurt your poor pretty corp face to be swatted away with our regal white gloves and removed from existence. This. Card. Saved. Me. So. Much. Removing deadly removal like Knifed and Spooned. Denying economy or even key breakers thye held tight in hand because there was a fear of installing a program. A fear.....of HORSES!

The Trojan kind to be precise. Trojan Horse is a nice little card that can be devastating to a poor runner. Especially an aggressive Maxx player or 419 this card can really save games. So this creates two situations. One where the runner be super aggressive to get in whilst they can. Or save up and cower on their side and either gives you massive advantages to lock them out or score out. And just to be sure you can get your tools out we pack a few Consulting Visit.

Then we have our delicious suite of agendas. SSL Endorsement for econ. City Works Project The thinking mans Obokata Protocol. And my guilty pleasure...actually no I don't feel guilty at all it's Underway Renovation. Oh baby I love this card from the day a Kit Test Runned a Magnum Opus and put it on the top of the stack. Then I draw Underway Renovation and install advance it trashing it. Ahhhh the days of playing it in GRNDL: Power Unleashed with Breaker Bay Grid and Simone Diego.

Memorable matches were practically all of them but sadly I can't remember the names of my opponents well all of them but the main statistics were only 2 losses in Swiss and 2 losses in Cut with Corp. I won against all Maxx players and even got to play two of the best Adam players who were incredibly awesome but alas Find the Truth is amazing for a Salems deck. The two loses were against a Ayla with Patchwork which was a really cool deck. And a Omar who survived a Snare! after successfully firing RNG Key.

This deck was such a dark horse of Trojan degeneracy and I cannot be more proud I was able to create such a devastating effect on my opponents on the final stage of official Netrunner. Thanks especially to PaulyG and Steffmonkey my other fellow Skorp players who helped encourage my deck and go over it. They really supported me as did all the UK team. My core meta the Readox meta. I hope I did you proud carrying us into the cut of Worlds. You guys made Netrunner from a good game into a great game I've dedicated myself into becoming a strong advocate for big plays and bigger moments. Thank you all for such an amazing time and I am glad to walk into the light of the NISEI driven future with you.