This is my (current) take on the old Tightrope Azmari list.

On the day, I went 4-0 with this and 2-2 with runner, and took and ID on round four (all I wanted was the playmat). I won our casual game on the ID, so I'm choosing to count that as a win.

During the Top Cut, I beat whit- I mean gunslinger round 1, with Counter Surveillance Zahya (I get tilted when I play runner, this let's me turn my brain off).

Round two, I beat RondyDoge playing Apocalypse MaxX, by scoring out behind Funhouse after getting hit by Apocalypse twice.

At this stage, I am guaranteed to be in the top 4, and I am free to tilt out.

I lost on time in the semifinals to Sokka (who played extremely well), after an extremely close game, which concluded my run with this deck as the only loss across two days.

Reality Plus is kind of like Azmari, except less consistent and more techable. Over about 150 games with this list and other version, I've won something like 85% of those games, and something like 90% of the tournament games I have played with it (It dropped one game in swiss over four tournaments for me). It feels like 90% of the games you play, you have the tools to win if you just play well or your opponent does not play well. This deck really encourages the second point, because if there is one consistent thing it does above all else, it's forcing your opponent (and probably yourself as well) to tilt.

You will be tilted. Your opponent will be tilted. You will start the game pre-tilted at your opening hand, and mulligan into something 10x worse. Your opponent wont play around the 1-of Tomorrow's Headline and get blown out and they will tilt. They will run at the triple advanced card you have sitting in your remote, spend all of their resources getting in (and be covered in tags), only to hit the confusing cat you chose not to score and they will tilt.

You will play this on stream and get so tilted you have to end early (please feel better soon).

When your opponent has made it to 6 points, then ends a turn under 8 credits or with a tag, and suddenly you have 6 points and they have 2, then you get to project your own tilt across the internet onto the opposing player.

1x Seamless Launch Threatens the 5/3 score with a single advancement, you usually have it by the time you're jamming 5/3's anyway.

Mausolus is absolutely disgusting. Either they pay something like 4/5 to break, or they let it fire to give you 3c and take a tag/net. Either way, it's roughly a 5 credit swing every time the runner hits it.

Now that most of the other pesky on-encounter effects are out of the game, and nobody plays NBN, Funhouse and Thoth seem remotely playable, with Thoth getting a guaranteed 2c payout, which makes it like a Mausolus but with 1c more cost. It's also worth noting that the runner CANNOT avoid the funhouse tag, so you fizzle No One Home and you also end the game vs. Jesminder Sareen. (Side-note - could The Peeper be almost playable? It also is a hard ETR vs. Jesminder)

1x Prisec: it's "free", and it costs your opponent 2-5 credits and a card. It sometimes looks like crisium grid too, which is probably what it should have been. Instead, we have 1 inf left over for GOD.

Only 1x Hard-Hitting News - runners have too much burst econ, and without Closed Accounts in the pool, they're happy to float 1x tag in order to dodge HHN. Hoshiko also gets a 3 credit bonus against your traces on the turn she interacts, and runners have lots of tricks to not lose to it. I still have 1x because sometimes you can fork with Public Trail into Hard-Hitting News. 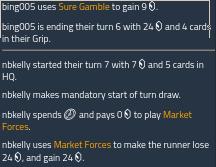 Quantum Predictive Model can easily take that number down to 12 agenda points available (and 3 free points for us), once a piece of ICE or two has been set up.

15 Minutes takes that total down another 1, to 11 points for the runner, and another "free" point for us because we can just score it from hand. What this means, essentially, is that if we can score out one non-kitty non-15-minutes agenda, then the runner almost has to find every other agenda in the game. Doing this is likely to give you 3 points for free through Quantum Predictive Model, which means you only realistically have to score 4 points to win.

Running 1x Bellona along with Global Food Initiative seems a little suspect, but Public Trail is an absolutely disgusting card, and Exchange of Information lets us make good use of the free points we get from 15 Minutes and Quantum Predictive Model, and also gives us another alternative use for Tomorrow's Headline.

I've started not playing hedge fund turn #1 vs. criminal. If I can jam an ICE infront of HQ, an ICE on the remote, and Rashida Jaheem/Daily Quest, then great. I figure that the turn one boomerang-siphon play is only really devastating if it undoes your hedge fund. If All that happens is I spend 4 rezzing a piece of ICE and they can (maybe) steal one credit, and they paid 3c/3clicks to do it, then I can live with that.

Against anarch, jamming Daily Quest feels like an absolute garbage play. If they have (turn 1) a Botulus, then your gameplan is fucked. If you choose not to rez, then they have a free magnum opus. If you choose to rez, and your ICE does not have at least two relevant subroutines (or a tag-on-encounter), then they have a free security testing that is stealing your money and server space until you commit more ICE to it.

Against shaper, just try to force interaction and you will either win, or get hit by 3x Apocalypse. The currently trendy smoke deck can get blown out very hard by public trail and enforced tags.

Against Sunny Lebeau: Security Specialist, you actually have the option to pay into the Security Nexus trace - you're given 2c back. You can realistically stick a Daily Quest, and you can demolish the resource economy (and Spinny Wheel) with a well-timed public trail. I'm not running Macrophage in this version, but IP block is punishment enough for Aumakua.

There's almost always the "late-game" option of winning through Exchange of Information, like so: 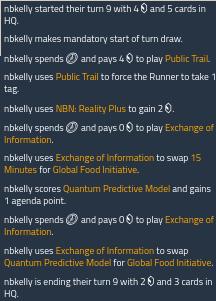 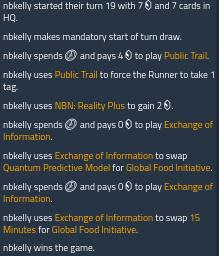