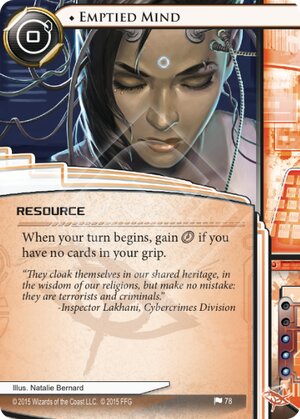 When your turn begins, gain click if you have no cards in your grip.

"They cloak themselves in our shared heritage, in the wisdom of our religions, but make no mistake: they are terrorists and criminals."
-Inspector Lakhani, Cybercrimes Division
Illustrated by Natalie Bernard
Decklists with this card

It's criminal that this powerful but weirdly terrible card doesn't have a review. Let's rectify that!

Most of my thinking is contained in this prototype deck from around when the card was released. The breaker suite doesn't make sense anymore given the conspiracy breakers (which are auto-includes) but everything I discuss here is covered there, but with an accompanying decklist.

First off, Emptied Mind is a build around card. You don't just slap this in a deck because you might have no cards in grip and want to gain an advantage. You need to purposefully build a deck that gains the extra click consistently and plays around its disadvantages. So we have three questions:

In short: Magnum Opus. Whatever card that reads "click this a lot, gain an advantage." The other options are Professional Contacts and Laguna Velasco District—those are obvious nonbos with Emptied Mind. You need money to win, an extra 2 per turn is :ok_hand:

Joshua B., the most similar card, was played in Data Leak Reversal decks; EM doesn't make sense there. DLR decks almost never have an empty grip, they want tons of card draw.

How will we keep an empty grip?

There's actually a decent amount of support for this in Anarch. I'll laundry list without too much detail:

The unifying factor of these cards is they let you avoid cards, even duplicates of cards you have installed, stick in grip. You can still get what you need but you don't have to hold it in hand—you can trash breakers, store resources on peddlers, and if something goes wrong start all over with Noble Path. Other interesting ideas:

So there's actual, strong card draw for this archetype that can't keep cards in hand. These are mostly cards people play anyways that happen to support this weirdo archetype.

How will we survive damage?

Any installable that banks damage prevention is golden here. Guru Davinder is the most all purpose & his major downside (expense) is cancelled out by the EM-MOpus economy. I think Guru, which is quite honestly a bad card, is a perfect fit for EM decks.

Cards like Biometric Spoofing are OK but probably not powerful enough (you still straight up die to Snare!, for instance). Other cards are generally Shaper & you have to spend a lot of influence. Feedback Filter might be good but doesn't address meat damage.

You can also just YOLO if damage is ever super out of the meta. But random damage subs on playable ICE (e.g. Ichi 1.0, Fairchild 3.0, Cobra) are something to be wary of.

Do you like turning Sweeps Week into a one credit self-Vamp? Is running through Komainu for free funny? Then you should build an Emptied Mind deck for sure. There's a decent tier three jank list here without a doubt. It's the best bad card in the game. Other than Akshara Sareen, of course.

(Earth's Scion era)
phette23 2239
Good, in-depth analysis! If Mumbad Cycle didn't stink so much, I'd certainly give it a go. It might be a good idea to consider Citadel Sanctuary as a way to get rid of tags, mitigate damage and achieve empty grip at the same time. — H0tl1ne 13 Jun 2017
Severnius Stim Implant is tailor made to work with this. — quailman2101 13 Jun 2017
Concur! You can use Severnius Stim Implant + Duggar's with this, and if you started the turn with an empty hand you can pop Duggar's and have 1 click left to make a mega-run that empties your hand via the implant. — KitsuAeryn 15 Jun 2017
Hmmmm, *taps fingers together* excellent. — quailman2101 15 Jun 2017