In this house we Trust The Crow.

This is the corp I played at the 70 person Ntscape Navigator SC, going 3-2 with wins against 419, Ayla, and Steve, and losing to Lat and Val.

I've discussed in great length my thoughts on CtM in Gateway Standard already so I encourage reading that writeup to see my thought process on building The Most Fun Corp In All Of Netrunner. I'll go into a bit of detail on my changes from that list.

Slots are very tight in CtM and I really wanted to fit a third DBS in because of just how important it is to your gameplan of keeping HQ clean of agendas. I settled on cutting a Temple but you could easily get rid of an Amani either, or potentially a piece of ICE, but I'd rather cut an asset before cutting ICE.

Malia hadn't been pulling enough weight in testing, with most resources now inexpensive or virtual and blanking a Daily Casts just isn't good enough unfortunately. It's still worth a slot in my mind, but the second Sprint proved to be very valuable to filter HQ alongside Spin Doctor. Sprint's good, guys. It's being slept on.

Probably my worst non-Apoc matchup, this was potentially a grindier affair but the runner never managed to land an impactful Diversion of Funds and they allowed my Commercial Bankers Group to keep ticking from turn 1 which gave me enough money to do what I wanted. Psychographics got me the win.

This was a worrying start as I saw them install a bunch of T400 Memory Diamond and drip econ so I was worried about a potential shaper bs combo so as soon as I had SanSan City Grid I started FA-ing agendas. However no such combo existed, just a big ol' rig, and an untouched board generated so much value I was able to take the win.

Round 3 - L vs Valencia Estevez: The Angel of Cayambe

I knew my opponent was on Apocalypse having played them on Jnet casual earlier in the week, but I overcommitted to defending the apoc by installing a Tollbooth, Slot Machine and an IP Block on Archives. They were eventually able to just shift to dismantling my board and I could never get that headlock grindy board state that CtM wants.

This was a wild game. Thirty turns of me clicking for credits while Steve Doof'd and Miss Bones'd me to hell. Having the third DBS shone here, as did Sprint keeping my HQ clean of Agendas. The 8 agenda suite also helped massively in the final stages as Steve tried to find the winning agenda. Eventually through Jeeves Model Bioroids, DBS, and SanSan I was able to FA to victory. Really buckwild game (apologies to Rotom for taking so long on that one).

This game is on stream over here on Aki's Twitch. At this point I was very tired after playing four rounds of competitive and intense Netrunner, and also had a small child demanding my attention. I went for an early HHN which I shouldn't have gone for for a variety of reasons. I struggled to rebuild from there and despite suspecting Apoc (combination of Lat and seeing Out of the Ashes in bin), I didn't play around it well enough. I thought I did well enough to rebuild after the first, but the second sealed the deal.

Overall I am really pleased with CtM. Only 3 people were on CtM at the SC and I think it's generally being slept on at the minute. It's got a lot of powerful assets, a strong ID ability, and some gross ICE, along with a pretty good Maxx matchup (which I also played and you can read my writeup of that here.

Thank you to Akira for running the event, my opponents for some great games, analyzechris for taking time out of his week to watch my terrible misplays, and to IPT for testing in the run up to the event. I'm very pleased with a 13th place finish in such a competitive field and a lot of that is down to the great stuff happening in the Itinerant Pro-Testers group. 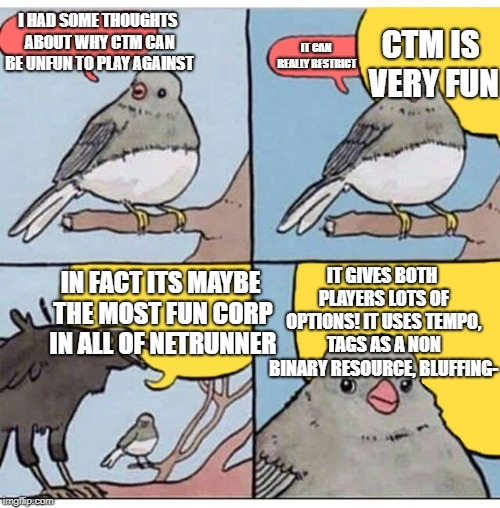