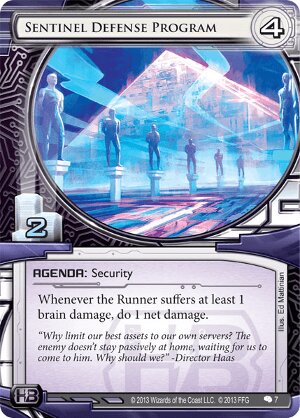 So this is really obviously cribbed from @Sokka's Sentinel Defense Program deck, published in lieu of actually being able to play; I liked it, but Echo Chamber just wasn't violent enough for me. If there's one thing I like, it's sticking Gene Splicer where it doesn't belong, except in this deck, it kind of does.

Using that instead of Echo Chamber freed up a whopping 4 influence, and the only cards that obviously stuck out to me were the Elis; I traded one out for a Gold Farmer (costs the same most of the time, but punishes Boomerang a little) and an IP Block in case anyone was still on Aumakua despite the expected (and actual) prevalence of Cyberdex Sandbox as a corp ID.

The deck went undefeated on the day, beating:

As for why I picked this - on top of the obvious fun of someone facechecking a Brainstorm and just instantly dying, we found in testing that it makes Stimhack a little more annoying to play, which is worth it on its own, as well as adding damage to Stim Dealer and Amped Up, both of which were relevant on the day.

In the end, however, I only ended up placing in 12th, because my runner deck was a real dud - it was a series of bad decisions in an environment in which runners are kind of at a disadvantage anyway, oof.

Big thanks to Sanjay for a really fun tournament, and I'm kind of hoping now that we could maybe see this ability on a standard-legal ID someday - it feels relevant without being overpowered, it interacts with some runner cards in a fun way (esp. the ubiquitous Stimhack), and it makes some cards that are usually memes like Brainstorm into actual threats.