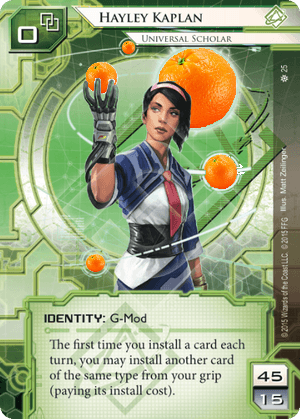 You can watch the Swiss Rounds Video

The title of this deck is a play on how my wife says orange with her Penn. Dutch accent

Interdiction is great as a surprise counter to upgrade hell decks. It also keeps you safe from Batty and gives you an out against Scarcity. I am considering finding room for a second copy. The other Hayley player lost both games of the cut due to turn one Scarcity.

Sometimes you gotta get high to truly understand the code. Stimhack is an incredible Hayley card. It helps you maintain pressure on the remote across multiple turns and it helps you install your expensive items without impacting your tempo. 10/10 would eat drug laced oranges again.

I will always gamble Shirley

One of the harder choices I made was using The Maker's Eye instead of Indexing and Mad Dash. I decided with the amount of Palana and CTM I anticipated seeing, I could not reliably run RD more than once. Raven and Miraju ended up being everywhere so it was the right call.

Astrolabe is the best console for Shaper when you don't need your console to do something specific. It netted me a lot of draw over the tournament and even with the Find the Truth reveals I do not feel like knowing I have the Daily Casts in my hand is that big of a deal.

One of my spicy includes is Cyberdelia. I added it because I have a large program suite and since I run more than lock Hayley I need to get a bigger refund on my runs. With the combination of Delia and RNG Key I am potentially being refunded 6 credits for running RD. That makes checking RD against most decks cheap, free or profitable.

One of my Shaper pet cards is Artist Colony and all its distilled shaper BS. It lets you trigger Hayley's ability without using a click, it lets you destroy 15 minutes or GFI if you get tagged. It makes Stimhack runs even more valuable and flexible. It is a great Shaper card that helps you stay in the game.

Everyone is so rich. What can a hacker due against such reckless wealth? Install Beth Kilrain-Chang and have 5 clicks for the whole game.

3x Daily Casts, what is the point of making all these runs if you don't show the world with a daily livestream?

Fan Site feeds both Artist Colony and The Shadow Net giving you more flexibility, cash and most importantly access to your tools.

My choice of restricted card changed multiple times during testing. However, I feel that in the current Obokata and Skorpios meta, Film Critic is the best choice for Shaper. This is especially true for control style builds that run like this one. I can't afford to waste Sac Cons on my rig, those sac cons are for Tapwrm.

Find the Truth was a great card on the day. Giving me an excuse to check remotes and letting me know if it was worth it to run RD. It also helps check lightly iced HQs more often to get double info, 1 card from HQ and the top of RD. It also combos with Equivocation to make sure RNG Key always fires on RD runs.

The idea here being I can run RD, fire Equivocation and if its an agenda I make my RNG call and steal it. If it is not an agenda I can have the corp draw it, then I can use Find the Truth to see the next card and still make a correct RNG call.

1x or maybe even 2x Hunting Grounds is a must have in the current meta. Data Loop, Data Raven, Komainu, Brain Storm, these ice are everywhere and tax Shapers more than others. During the tournament I found myself wishing I had a second copy or maybe a Femme Fatale.

Professional Contacts is my favorite draw card besides Inject which obviously has no place here. Mulligan for ProCo every time.

Sacrificial Construct is what takes my Tapwrm from an annoyance to a game defining card. In the losers final I won in large part because I was dripping 12 credits a turn vs CTM.

The Shadow Net is great when you are against economic warfare decks. The ability to click for 9 credits as a last click using Fan Site and Sure Gamble is incredible.

1x Atman is for mythic ice and/or the most common ice strength on the board. Save some break money and Cyberdelia and RNG Key reap more profit. In one game, I got to put down the old school Atman 4 and it let me break seven pieces of ice that were rezzed.

Gordian Blade is the best decoder that isn't Refractor.

Na'Not'K is the best choice that we have without spending influence. Also, since we are run Hayley, people tend to pile ICE on RD and then Nano gets way better.

Clippy is your barrier breaking friend. You want to be as efficient as possible so you can maintain tempo. You also often overdraw so you can pitch it. It is another way that you can trigger Hayley's ability without using a click.

Hopefully no one is surprise by the Clot since its the best Shaper card in Netrunner. The fact that its ORANGE makes no difference, the interaction of Clot, SMC and Hayley is the one of the most compelling reasons to play her.

Equivocation is the the second part of our information and money ORNG combo. Just a solid card that puts pressure on the corp and adds value to RD runs. I love how well designed this card is.

The Misdirection keeps you safe against Hard Hitting News but more importantly it saves you money and clicks so you can keep running and making money. A lot of the time Corps play HHN to slow you down. With all the ways we can tutor Misdirect we can just shrug the tags and keep drawing, installing and checking RD.

We come now at last, to the namesake of the deck RNG Key. This card is like a super Desperado in this deck. It is like a non stealth Net Mercur, it gives you money and cards and rewards you for running and checking things. The most important thing to keep in mind is that even if you whiff on the call into HQ, you still made a run and got information and maybe an agenda. This card is especially good against people who play net decks, I landed several blind calls in the tournament just by knowing the most common costs in CI and CTM builds.

Self-modifying Code that's the name of the Show!

Tapwrm is the best Shaper econ card right now because it forces the corp to make a hard choice. They either have to give me a free turn to set up the late game lock or they have to give me free money. With two and three Sacrificial Construct I can potentially cost the corp 5 turns in a single game. With Beth Kilrain-Chang in play that is an absurd amount of free clicks that I can use to crush the corp.

Against most corps they eventually give up on getting rid of it and try to rush out. That is the wrong choice, especially against this deck. With the drip, ProCo and RNG key I can stay at level credits while hammering RD every turn. 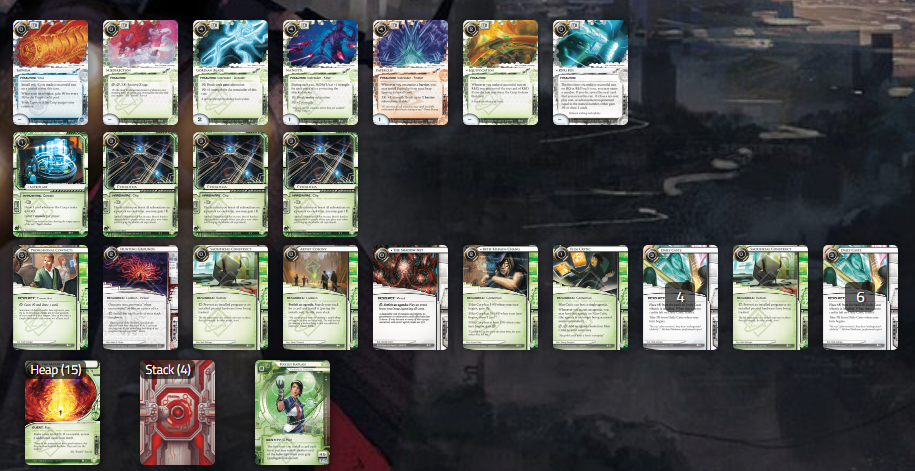 So that is the deck, I love it and I hope you give it some plays!