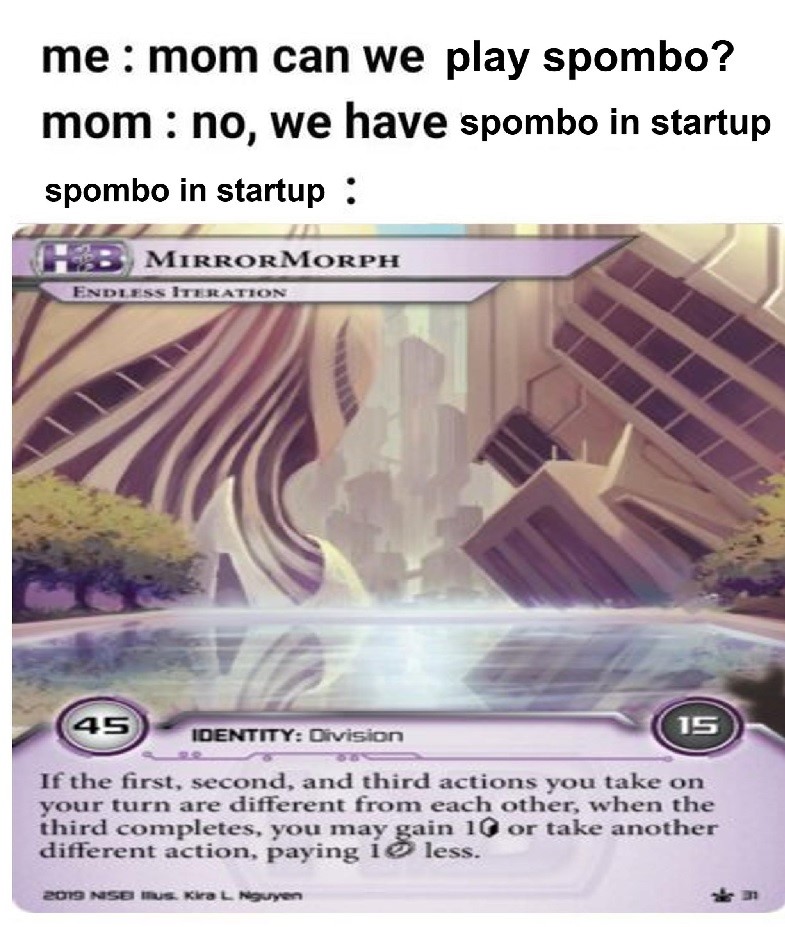 This deck is based off of a similar decklist that has been floating around netrunnerdb and jinteki casual games for a bit, which I thought had a cool central idea but played a bit too slow to win games before the runner could win off centrals.

Basically, the idea with this deck is to fast advance everything from hand with either Biotic Labor or, more uniquely, Red Level Clearance + Bass CH1RI80G4. RLC allows you to install Bass from hand clicklessly, which you can then use to gain an extra click and score out a 3/2. In MirrorMorph, however, it becomes possible to fast advance out a 4/2 with this combo by playing RLC (an operation), using the click ability on Bass CH1RI80G4 (a unique action), and then installing your agenda from hand (install action), and then using the extra different action from the MirrorMorph ability to advance the agenda once before advancing it 3 more times and scoring. (Again, credit to ccxkrish1921 for first discovering this interaction.) In this decklist, we take advantage of this ability to occasionally score out 4/2s by playing 3x Offworld Office, an agenda that gives a massive tempo boost when we score it, allowing us to quickly threaten to score out another agenda.

And quickly is the operative word here--this deck goes fast. Winning by turns 10-12 is not uncommon. Basically everything in this deck is either 1) a combo piece or 2) money/card draw. We only run 8 pieces of ICE, all of which are taxing, painful to facecheck, or both. Because we aren't trying to score out of a remote, we don't really care if the runner gets in--we're just trying to make it as inconvenient as possible. The exception to this is Hagen, which we run in order to have some counterplay against Clot and especially Stargate. This is probably our worst piece of ICE, and so we'd rather not install it unless the matchup calls for it.

Once the runner gets their tools to break our ICE, we rely on the high trash cost of Crisium Grid on (usually) R&D in order to prevent multi-access and R&D lock. Once again, we are not trying to completely lock the runner out, but rather slow them down enough to (hopefully) score out the last few agenda points. In a pinch, we can even use Archived Memories to bring back our Crisium Grids while we search for our last few points.

For our agenda suite, we're running mostly 3/2 agendas (with our Megaprix Qualifiers usually counting for 2 points), and then 3x Offworld Office along with 1x Project Vacheron. Out of these agendas, Project Vacheron is the only one we don't intend to score, usually shuffling it back with either Spin Doctor or Sprint. Because this deck doesn't go quite as fast as the fast advance Sportsmetal decks in Standard, Project Vacheron is really the Achilles' Heel of this deck. If the runner manages to steal it early on, your chances to win decrease dramatically, so it's quite important to keep it hidden until you get to 4-5 agenda points.

Our economy is rather straightforward. Ideally we want to be triggering our ID ability every turn to get 1, which effectively will give us a free PAD Campaign on most of our turns. Clicking for 1 in MirrorMorph is much better than in most other corps, as we are essentially clicking for 2 if we can pair it with two other (different) actions. Most turns where we aren't scoring we want to: 1) Draw, 2) Install, & 3) Play an operation/click for 1, and then get our extra .

Two cards in this deck help with this gameplan: Subliminal Messaging allows us to clicklessly play an operation, letting us both gain the MirrorMorph bonus and do two of the same action on the same turn (often best used to install two cards, such as two pieces of ICE or an ICE and a Crisium Grid or Tranquility Home Grid). The other card is Nanoetching Matrix, which provides us an additional action to more easily trigger our ID ability. Ideally, however, Nanoetching Matrix is best used to "clicklessly" gain 1 additional out of our ID, as we can have a turn where we: 1 Draw, 2 Play an operation, and 3 Install a card (including the Nanoetching Matrix itself), and then use the ID to gain 1 additional , which we then use to click to take 2 off the Nanoetching Matrix. Then, if the runner wants to trash it (which they probably should), we gain an additional 2 while the runner has to spend a and 3. Thus, our Matrices are best viewed not as permanent asset-based economy (although they certainly can be, if the runner decides not trash them), but as a 1-time 7 swing in our favor, every time we play them.

Now, all this being said, don't be afraid to know when it is correct to pass on the MirrorMorph bonus. Obviously on the turns we're scoring a 4/2, we are unable to use it to gain 1, but it is also sometimes better to spend a turn playing two Hedge Funds, or especially to play two pieces of ICE over R&D and HQ on turn 1. Hedge Fund + ICE + ICE is still probably your best opening!

Speaking of opening hands, we're usually looking for 1) Any economy/draw card, 2) At least 1 piece of ICE, and 3) Not more than 2 agendas in hand. The fact that all of your economy and ICE is good on turn 1 helps set this up. On the other hand, if we draw our 1x Vacheron and no way to get it out of hand, that's usually an automatic mulligan. In general I find the opening hands of this deck to be very playable, which is good for a deck that wants to go as fast as this one does.

At any rate, I've been tuning this decklist on Jnet for a few weeks now, and feel pretty comfortable at where it stands. You could probably cut the 1x Tranquility Home Grid for another Hagen, or vice versa, depending on whether you think your deck needs more economy or tech cards, but otherwise this deck feels like it flies through games and puts the runner on a pretty short clock to score out. Honestly, it feels like the closest you can get to playing a Sportsmetal list in Startup, and is surprisingly strong because of it (I think I have around an ~85% WR on Jnet, although most people aren't running Clot :P). If you have any questions, comments, or suggestions, feel free to comment below!