This is the deck I took to the UK Nationals Startup side event. After going 4-10 in the main event, I wasn't feeling super confident about my chances, but remembered that I was playing very different decks on day two so there was a chance that I'd do better.

Bewilderingly, this deck went 4-0 and my runner went 3-1, so I won. This is my first tournament win outside of winning a small league in my local Warwick meta, so I was beyond surprised!

[This writeup got far too long for winning a small tournament, so here's a quick summary of what follows - the next section talks about how this deck works, then there's a section on how the games went and then finally a bit at the end thanking people. Feel free to skip the unhelpful bits!]

This deck was built about four days before UK Nationals - I'd been playing GameNet in a local startup league and not been that excited by it, so built something new instead. My partner (AceEmpress) suggested Mirrormorph because fae'd been enjoying it, I remembered that Punitive Counterstrike existed and between us we built this. I played a few games in on Jinteki.net, watched my brain expand in real time and sleeved it up.

This is a Punitive HB deck, unsurprisingly dedicated around getting lots of money, letting the Runner steal an agenda and then watching them regret their decisions. The star of the show is Punitive Counterstrike, which requires the following conditions to hold to get a kill:

For point (1), we have the traditional Punitive HB agenda suite. Project Vacheron because it counts as a stolen three point agenda while being worth zero, thus allowing you to Punitive even when the Runner is already on game point. Send a Message is there because we don't have anything better and because it lets us rez some of our unpleasant ice at a massive discount. Luminal Transubstantiation is there as the last agenda because I'd rather have slots for economy rather than running two Élivágar Bifurcation, but this is debatable.

For point (2), we use MirrorMorph: Endless Iteration for value here rather than any cool combos. You should aim to use Mirrormorph as much as possible, and always use it to gain money by either taking a credit, or using another money source that you've not used this turn. Regolith Mining License is an absolute gem - you can click it once a turn because you're not rushing to score, or once you're ready to bait a run in the remote you can empty it and then install a card. Nanoetching Matrix is also good for this.

We also have a lot of taxing ice to drain the Runner's credit pool. Brân 1.0 and Ansel 1.0 were obvious choices, and Gold Farmer is a nice way to spend influence. You'll likely end up with two or three ice on centrals to make any centrals pressure cost dearly.

For point (3), we run a fair amount of draw in the form of Red Level Clearance and Spin Doctor, with the latter helping you reshuffle agendas just in case you have two many. The third trick we use however is Mirrormorph itself - a good way to get the Mirrormorph click is by spending a click to draw a card. Clicking to draw a card at least every other turn is very reasonable, even if it means discarding an ice.

We don't really have any tech for point (4) - I think a big part of why the deck did well is because people didn't expect Punitive (I saw people install Stoneship Chart Room and then immediately use it) and I didn't face any Anarch so saw no Steelskin Scarring. I expect this deck would have suffered if it were a bit more of a known quantity.

We can still score if we need to, however. A possible Mirrormorph turn is: install a 5/3, advance, NEXT Activation Command (triggering Mirrormorph), and then next turn Seamless Launch double advance to score. If they do manage to get through your remote with NEXT Activation Command active, they're probably poor enough for you to Punitive or at least open up a scoring window. We also have Manegarm Skunkworks to help here, and a Big Deal in case of emergencies.

It went 4-0 - three Punitive kills and a score. Here's a brief summary of the games as I remember them.

Round 1 vs Clusterfox on Zahya (Flatline) This was a long one, because I really had to build up. Zahya unsurprisingly made a lot of money through general Criminal goodstuff, so I had to force multiple runs through an unpleasant remote to have a chance to Punitive. In the end a Vacheron was stolen from the remote, and I had exactly the right number of credits for the kill.

Round 2 vs J0N4LD on Lat (Flatline) Boat is still 8c to install, and I managed to draw into double Punitive pretty early (started with one in hand and dug for another), so baited a steal and got the flatline through.

Round 3 vs Swiftie on Lat (Flatline) Very similar story to round two - I had to money up a bit harder, but a steal from a lightly protected remote lead to a kill.

Round 4 vs Dominic Hedges on Lat (Win by Scoring) This was a game and a half, and probably the best game I played all weekend. There was no early Punitive nor early steals, so I went for scoring to start with. I managed to score three points pretty early, made a lot of money and then lost it all rezzing big ice. He finds the Punitive in HQ after popping all of the Stoneship and a few turns after stealing a Vacheron, and suddenly it became a tightrope walk of a game as I tried to keep enough money up to threaten Punitive. I score a Send a Message behind two Bran and a Magnet via the NEXT Activation Command / Seamless trick. I let a Send a Message be stolen and forget that Lat lets him draw up to six, meaning that I go for the hot new Value Punitive™ since he was on zero credits, trashing some economy from grip. I go to score the final agenda and let him through on R&D since all that's left in there is a Vacheron. Amazingly played on both sides.

Given that this deck went through fairly minimal testing, I don't have much that I would improve - I'm very happy with how it played! The only card I'm unsure of is Big Deal - it's very expensive so suddenly means you can't threaten Punitive any more. I'd consider a second Manegarm in that slot.

(This section is the same in both of my Startup lists, so if you've already read one you can stop here.)

Look this is my first tournament win, I'm allowed to be a little sappy. Big thanks to:

Finally, I will leave you with the extremely clear notes from my partner's "seminar" on how to play Mirrormorph: 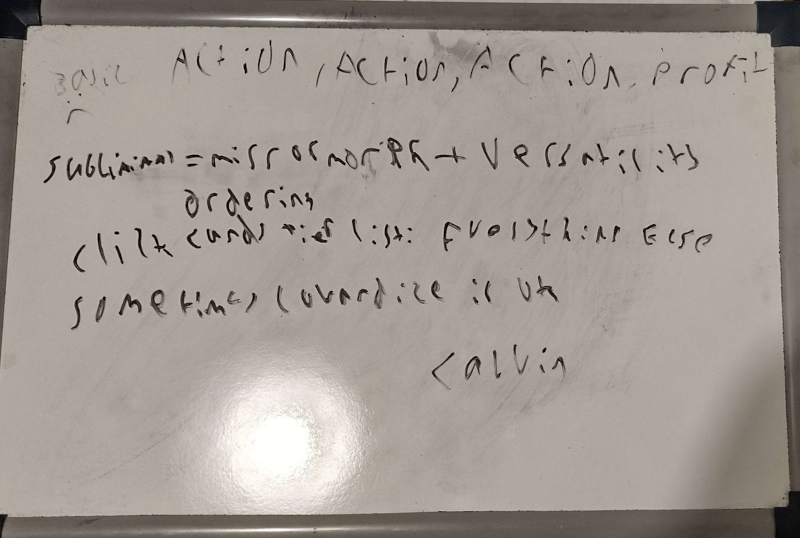