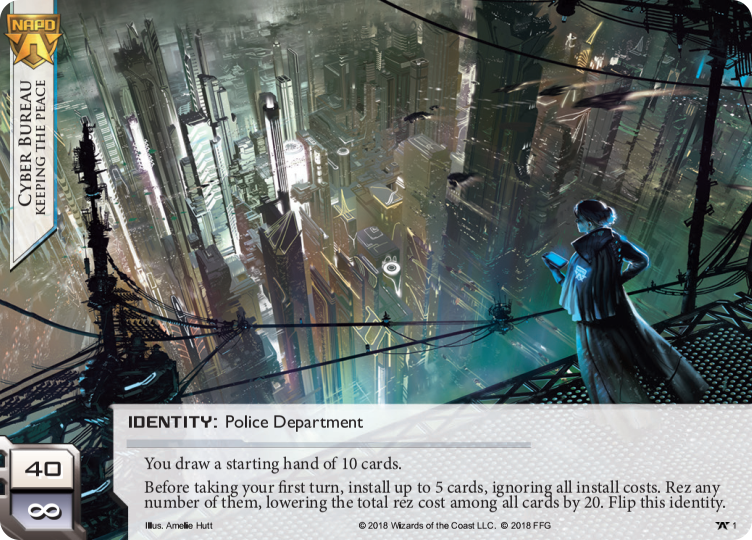 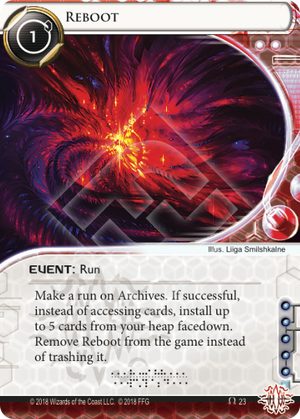 I've been tinkering with an Apex deck for quite some time, to some effect, and one of the biggest challenges aside from assembling combo pieces was sustaining in the endgame. I blow through my deck really quickly to pick up everything I need, but the endgame gets really stagnant, and if your key breakers end up in the bin, it's often difficult to recover.

Reboot looks pretty simple - it's a Retrieval Run, but instead of one program face-up, it's five face-down. This has some obvious interactions with:

Previously, Aesop Apex had no decent way of getting bin stuff back en masse, so this is a big deal for that archetype in particular.

I don't know of any way to get face-down events back to your hand on the Runner side, but there could be applications there.

It does count as a run on Archives, so there's some slight synergy with Apocalypse - with an Assimilator in hand you can bring some of your trash back, nuke the board and start setting up next turn.

You can even throw out a couple of these in a turn to get a whole bunch of burst installs... but be really careful of Death and Taxes.

Overall it's a cheap card that has wide applications within Apex.

archmage 80
Apex can't install non-virtual resources. So, no pawnin' with Aesop there. It might potentially enable Chop-Bot as a semi-reliable draw engine, so... — H0tl1ne 6 Jul 2018
As Reboot installs cards face-down, you could use the card to install non-virtual resources face-down and then Assimilate them up. — BlackCherries 6 Jul 2018
I don't know what to say. What a sick, sick thing. — H0tl1ne 6 Jul 2018 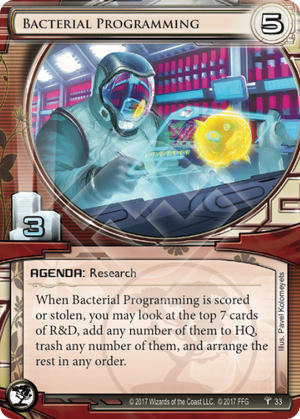 I played with Bacterial Programming for the first time tonight in my Punitive Evolution deck, and for the love of Apex this card is out of control.

The specific play that sold me on it was discarding two copies to Archives (it was a calculated risk) and the Runner stealing both (0-0 -> 0-6), letting me draw 14 cards.

At that point the Runner knew for sure a Punitive was coming up, so they moneyed up, but it wasn't enough.

Mandatory draw up to twenty cards.

Click one, Punitive Counterstrike, no boost. Runner spends half their credits to avoid 6 damage.

Click three, Punitive Counterstrike, no boost. Runner is dismayed at the sight of the third Punitive.

For a more serious discussion of why it's good, it's a 5/3 with a hugely swingy effect that happens regardless of who gets the agenda. Being able to put seven whole cards wherever you want them is a huge boon, and I'm sure with even the slightest bit of creativity, seasoned Jinteki players will be able to get loads of mileage out of this card.

Give this one a whirl sometime, just the once. You'll be glad you did.

archmage 80
Played The Maker's Eye with 4 cards remaining in hand against a PE deck, what could go wrong? Saw 1st card Bacterial Programming, corp proceeds to order the remaining cards and I access a Snare! and another agenda for a total 5 net damage and flatline. Saddest moment ever. — BlackCherries 28 May 2018
Brilliant. Truly the most Jinteki of plays. — archmage 29 May 2018
Why would the effects combine, instead of resolving the first agenda and then resolving the second? — Apex Predator 7 Dec 2019 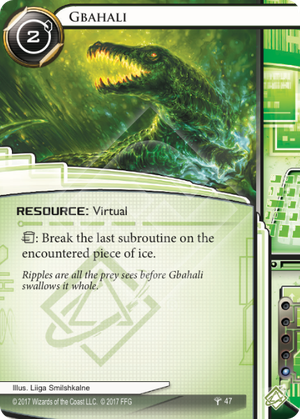 Gbahali is the counterpart to Kongamato, with its only differences being that it hits the last subroutine rather than the first, and that it costs one more credit to play.

You play both in the same way - either drop it on the turn you need to access something to bamboozle the Corp, or leave it on the board as a threat to force them to ice more aggressively.

I think Gbahali costs the extra credit because there's more ETR subroutines in last position than first? Enigma comes to mind, and I vaguely recall a bunch of Jinteki ice that has "Do X damage" and "End the run" as their two subroutines.

At any rate, both Gbahali and Kongamato are excellent cards that can squeeze you through a stack of ice in a pinch. 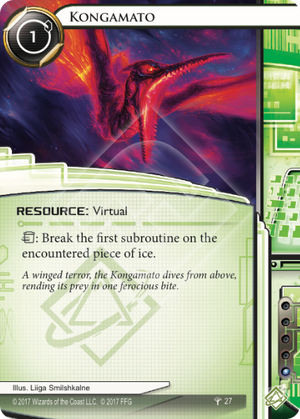 Kongamato is a wonderful resource that acts as a powerful access-enabling tool. It's cheap to install, free to use and doesn't care about ice type. Of course, it's only good against certain pieces of ice.

I find there's enough use cases for it to be worth including, since you can always use it to save money in the worst case.

It's also virtual, which means it's usable in the tentacles of Our All-Consuming Overlord! You can use it for its intended purpose, or if you don't need it you can ID it and sell it to Aesop or your pet bug.