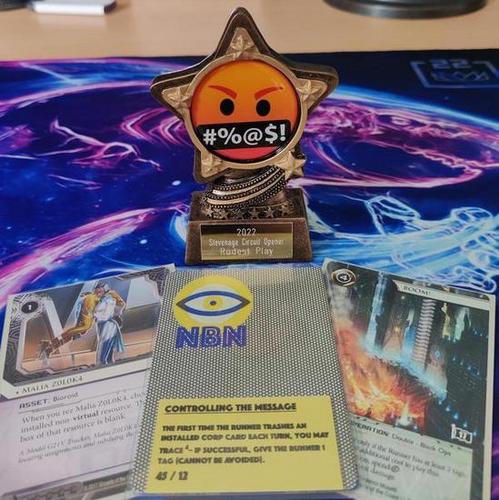 If you are looking for Turn-1 concessions on j.net from shaper players who spend 5 credits and a click only to have their Professional Contacts lose all printed abilities, then this is the deck for you!

Thanks to @SwearyPrincess for running yet another awesome tournament! It's so good to be playing real f2f netrunner again. I was worried about missing triggers without the j.net prompts, but it's weird how it all comes back to you.

There are definitely a couple of negotiable slots, but it's fundamentally solid.

While we were all super happy with our CtM list from Worlds 21, Rotomappliance's worlds winning list (and runner deck to beat) includes Salsette Slums - which is a card that demands an answer.

Maw and Aeneas Informant also mean that we need an 8th piece of ICE, so that we can protect more than one remote. Having the extra ICE also opens up some never advance plays that are surprisingly effective.

All of the matchups are honestly fine - even the ones where the runner is teched out with Citadel Sanctuary, Misdirection, Deuces Wild or Apocalypse.

The thing to be most afraid of is R&D accesses. Respect Stargate, Conduit, The Turning Wheel, Find the Truth and Mad Dash.

We play Malia Z0L0K4 to blank Salsette Slums, because otherwise that matchup becomes unwinnable. In other matchups we can use it to get a little tempo boost by blanking Liberated Account or Miss Bones or whatever we fancy.

We play 1 x Lady Liberty instead of the 2nd SanSan City Grid, because it plays around Clot, and it gives us a way to score Bellona (which otherwise we can't do). It's awkward AF compared to SanSan, and it doesn't fire Amani Senai, and mostly we would rather have a 2nd SanSan, but it's fine.

We play Hydra rather than Tollbooth because it's better against Botulus.

We play Regolith Mining License instead of PAD Campaign, because compressing our economy actions into as few turns as possible gives us a way of playing around PAD Tap.

This also gives us room to play Daily Business Show, which is very important against Maw.

Prisec is incredibly annoying for the runner to deal with, and is our key protection against Apocalypse. Put it on Archives and double it up with a Ping. Ideally we would play 3x, but we need the 8th piece of ICE (see above).

At some point the runner is likely to decide to float a single tag, and also Predictive Planogram is a great BOOM! enabler.

Turnpike is great until the runner decides to go tag-me. Use it to defend HQ, archives or a random remote (not R&D).

Conventional wisdom for including Malia in this kind of list is to play Archived Memories instead of the 2nd BOOM!. I tried it, and I'm confident that the 2nd BOOM! is correct.

Aryabhata Tech should be banned.

If Marilyn Campaign works, then Hedge Fund might become a negotiable slot. They could be swapped out for more tag punishment and another Amani Senai, but sometimes you just need money immediately, and the threat of a surprise Hedge Fund into Hard-Hitting News is to be respected.

The 2nd Turnpike could be something else, but I don't know what, and stacking them on HQ against criminal is pretty good.

A triple remote opening is a great way to start the game with an AR-Enhanced Security score, or a Rashida Jaheem fire. In the early game, these are our two most important cards.

It's worth taking a a risk to score Project Beale and Tomorrow's Headline where possible, just to get them out of the way. We are more comfortable being bold with Tomorrow's Headline, of course, because of the on-steal trigger. Bellona often looks after itself in the late game (especially against Deep Dive), so make sure to Spin Doctor them back into R&D ASAP.

We would rather the runner be poor than be rich ourselves. The runner credit threshold for landing Hard-Hitting News is 12 credits. If the runner has 12 credits (or less), then clearing the tags from Hard Hitting News is going to set them back more than it set us back to pay the 12 credits to land it (even if we go broke doing it). There are a few tech cards (Citadel Sanctuary, No One Home) that change this maths, but we should use 12 credits as our base threshold (not 8).

I get super flooded, but that's okay because CobraBubbles installs Stargate and focuses on R&D. I sneak out some points on a prisec that the runner doesn't want to have to deal with. When the runner does deal with it, the meat damage knocks rebirth out of hand (Prisec MVP). I land a HHN into Rashida that draws me some ICE to protect R&D and gets me back into the game. I slowly NeverAdvance the agendas out of hand one after the other, scoring an ARES in the process and protecting archives to defend against Apoc. A clutch Malia on a late game Liberated Accounts buys me an extra turn, and helps me win "Rudest Play".

I ICE archives T1 and score an ARES T3 from behind some ICE. From this position I'm pretty comfortable that Apoc is off the table, but I add more ICE and a prisec to archives to make sure. I land a HHN, @SwearyPrincess decides to float the tags - running HQ 3 times with Edward Kim: Humanity's Hammer to clear any tag punishment. I top deck BOOM! ftw.

I get a good start with Commercial Bankers Group, which Feathermark tries to clear with Miss Bones. She is kidnapped by Malia Z0L0K4, so I can land the Hard-Hitting News and then BOOM!.

I get a slowish econ start, but I do score an ARES, and I get to Malia Z0L0K4 another Miss Bones as she tries to trash a Daily Business Show. I have enough money from that to just about Hard-Hitting News through a No One Home and Countzer0 decides to float the tags.

BOOM! takes forever to show up, so I end up pushing a Project Beale (just to get it out of the game), and protecting R&D with Hydra and Mumbad Virtual Tour. Deep Dive makes me twitch, but fortunately the MVT leaves Countzer0 without enough credits to steal Bellona. Next turn Predictive Planogram draws me BOOM! and gives me the credits to play it (which is exactly what that card is supposed to do).